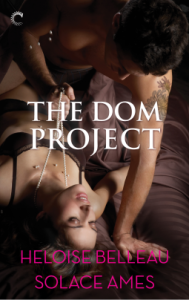 While on the trail of rare photographs of a kinky 1930s sex symbol, special collections librarian Robin notices that her best friend John is surprisingly knowledgeable about BDSM terms and paraphernalia. And John realizes that his best friend might actually be a “buttoned-up-real-fucking-life-naughty-librarian.” He knows her habits so well that it takes him little time to track down her blog, The Picky Submissive, which chronicles her efforts to find a dom who meets her needs and isn’t a jerk. And for the first time they open up about the fact that they’re both kinky, and that Robin is profoundly dissatisfied.

[Robin] “I’ve been trying and I’ve been waiting. I’ve been communicating my needs and I’ve been letting go of my highest standards and it’s just not working. Maybe I just attract assholes. Maybe the creepy guy to nice guy ratio among doms is higher than among ‘normal’ dudes. Maybe I’m not really a submissive at all, and if I was, I’d be okay with guys calling me whore when we’re out to dinner or telling me to put my hair in pigtails or grabbing me and telling they’re mind readers.”

[John] “Maybe I can prove you wrong.”

With the basic premise that there won’t be sex — “I don’t see you that way, and you don’t see me that way, and really it’s a moot point” — John proposes that he help Robin define what submission means to her. “I know all about you. I know what makes you tick. If I can’t dominate you, then maybe nobody can.”

Does that quote make John sound like an arrogant douche? He’s really just appropriately confident and assertive — as well as highly ethical and conscientious — and he does indeed know Robin very well.

They begin with a carefully worked out contract and a systematic approach — testing out an intriguingly long list of items such as Denial, Restraint, Pain, and Role-play to find what really floats Robin’s boat — but there’s nothing clinical about the intensity of their sessions. Some scenes are more for fun and help Robin write off certain aspects of submission; others take her out of the stratosphere. Although the narrative is third person, we’re right there inside Robin’s head, which makes the scenes blazingly erotic. As the one who has to stay in control, John’s point of view is naturally less overwhelming, but it shows his growing attraction to Robin as he strives to please her without breaking their contract.

This isn’t my usual beloved angst-fest. Problems do predictably arise, as John and Robin begin to have stronger feelings for each other and want to change the rules. And of course they both have fears about it, and make some mistakes. (Robin sometimes uses her safeword! John sometimes screws up a scene! It’s almost like they’re supposed to be real people!) The strength of the story is in the powerful D/s writing and the authenticity of the characters and situations. They have genuine issues, like the fact that toys and equipment are expensive, and that John has other play partners/lovers (both women and men) that he doesn’t want to casually discard. (They do move towards exclusivity over the course of the book.) I also really liked the inclusive of an old, ailing kinkster as a character, in a world which is usually portrayed as the exclusive domain of the young, beautiful, and rich.

Incidentally, John and Robin are an interracial couple, and it does feel almost completely incidental. Robin is white, John is apparently Chinese-American. (He may be one of the few contemporary romance heroes to have tattoos that aren’t cultural appropriation.) Although John’s family members are important secondary characters, race doesn’t enter into the story much, except for a wry comment from John about how he’s perceived as a large, tattooed Asian man. Since Robin and John have known and loved each other for years, the lack of issues around race seems plausible.

I really enjoyed this, as a smokin’ hot story and as a vivid portrait of people leading unconventional lives. I would have liked to see more romantic feeling between John and Robin that doesn’t stem from sex; the book used standard short-cuts to squeeze in the love. And I yearned to know more about how they ultimately made their relationship decisions. The ending left some unanswered questions, though maybe that’s just me wanting things tied up neatly, so to speak. I give The Dom Project a mostly satisfied B.

→ Willaful
Previous article: 70. An Interview with Lisa Renee Jones
Next Post: REVIEW: Torn From You by Nashoda Rose