Note to readers: This review contains a (non-specific) discussion of depression and mental illness.

I was looking for a RITA-nominated or awarded book to fulfill July’s TBR Challenge category and this one turned out to be in my stash. Marion Lennox has long been one of my favorite Harlequin authors (in both Medical and sweet romance) but after reading a dozen or more of her books I was kind of burned out and stopped for a while. This novel was nominated in 2007, so it’s an her earlier effort. It’s set in a small fishing village in Australia and has an interesting combination of angst, tragic backstories, and humor. Lennox is very skilled at integrating these characteristics and she does that well here, although it’s almost too much emotional, psychological, and physical baggage, especially when the suspense/jeopardy element kicks in. I’m still kind of on the fence about this book; I like it quite a bit, but I can’t decide if it works completely. 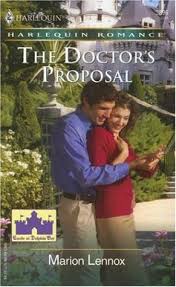 Kirsty McMahon and her sister Susie are identical twins who have come to Australia from the United States to find Susie’s late husband’s uncle Angus, who is a Scottish Earl settled in Australia and living in a modern, OTT castle. Susie’s husband Rory was killed in a car crash soon after their marriage; she is now eight months pregnant and has been suffering from a very bad case of depression. Kirsty hopes that meeting Angus will give Susie more of a reason to go on and also to take pleasure in her baby’s impending arrival. Meanwhile, Angus is suffering from lung and heart ailments and has lost his will to leave, and he is scheduled to go into a nursing home from which he doesn’t expect to emerge. Kirsty and Angus’s doctor (the only local doctor), Jake, meet and sparks of all kinds fly, but both have backstory/family reasons not to want to get involved.

Susie and Angus immediately take to each other and Kirsty and Susie move into Angus’s weird castle. Both invalids’ health situations improve markedly and they bond over gardening, especially the care and feeding of a giant pumpkin. Meanwhile, Kirsty gives Jake a hand with village doctoring and their mutual attraction grows, but they fight their feelings for each other because neither is willing to make emotional commitments. Jake caves sooner than Kirsty does (which connects to the title of the book), but they are basically at stalemate on the relationship issue for the first two-thirds or so of the book.

Then, into this rather bucolic idyll comes the villain, who while thoroughly a villain is also mentally ill. I want to note that while the connection between mental illness and violent behavior is definitely present, The text did not suggest that all mental illness  = villainy, rather that in this case the type of mental illness the character suffered increased the likelihood of violent behavior when it was not properly managed through medication.

As I said above, there is a lot of emotional trauma, past and present, in this story. Susie was injured in the car crash that killed Rory, Angus has chronic illnesses that are life-threatening (although treatable), and Kirsty is an anesthesiologist turned palliative care and pain-control specialist, so we spend time in the story with one of her new terminally-ill patients. And at least two people in the story suffer from debilitating psychological problems. I don’t feel as if any of these issues are treated cavalierly or inserted merely for plot purposes, but it is a lot to take in a category-length novel. The romance between Kirsty and Jake is definitely a big part of the story, but so are the other relationships and the small-town setting.

To me the portrayal of depression was well done, but everyone has different experiences and different triggers and I can imagine that some readers might not feel the same way. I wasn’t entirely convinced when the suspense/jeopardy plot took over, although it does make sense for the storyline. There were some seriously out-there developments involving Susie and Kirsty and only my general trust in Lennox’s expertise kept me from rolling my eyes.

So this is a hard book to grade and recommend. The story is so angsty, but all that angst is incorporated and presented in a matter of fact way (until the climax of the suspense subplot). It has portrayals of physical and emotional disabilities all over the place. I think if it weren’t a Lennox book I would have had more problems with it, but I find her writing and the way she handles difficult topics to be convincing, so it worked for me. Grade: B