I used to read a ton of Harlequin Presents books, but had left them by the wayside, until I picked up your new release, The Divorce Party, which was a direct result of your winning the 2012 So You Think You Can Write contest run by Harlequin. 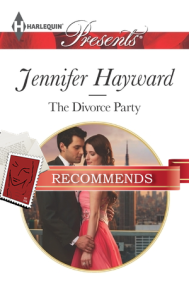 The Divorce Party Jennifer Hayward [Contemporary] ( A | BN | K | S | G )
Lilly Anderson wants a divorce. She fled her husband, Riccardo de Campo, a wine magnate, twelve months ago, and just wants the divorce to be final so she can rebuild her life and mend her bruised heart. She’s moved on in her life to become involved with Harry Taylor, a nice-guy thoracic surgeon, who would like to marry her. Of course, Harry never ignited the passion that Lilly feels for Riccardo. Nonetheless, she and Riccardo fought much more than they got along, and despite their extreme passion for each other, he broke Lilly’s heart. When he decides to throw a lavish party to celebrate their divorce, and insists Lilly attend, she takes her sister Alex as her wingman, pulls on a pink dress (Riccardo hates her in pink) and heads to the party, determined to just get through it so she can have her divorce.

Imagine her shock when Riccardo tells her he needs to stay married to her for another six months, portraying a happy, reunited couple so that the board of directors of his company will finally make him the CEO, a position he’ll inherit from his father. Lilly is appalled and distraught. She just wants to move ahead in her life, but when Riccardo offers her the house he bought for her in exchange for staying another six months, she’s tempted. Her younger sister has leukemia, and the sale of the house would fund her treatments for years. Lilly reluctantly agrees to the deal. What she doesn’t count on is falling for Riccardo all over again.

I really enjoyed this book. While Riccardo is all the things I expect from an HP hero: arrogant, ruthless, overbearing, he’s also very clearly in love with Lilly. While he takes extreme measures to be with her, I expected that of him as an HP hero. So I accepted the extremity and enjoyed the ride. While Lilly is a quintessentially meek HP heroine, she does have moments where she stands up to Riccardo, and when they finally succumb to their desire and love for each other, I found the payoff to be rewarding and really fun to read.

I understand that you won the So You Think You Can Write competition, but this book shows none of the signs of a debut author. It’s polished, has terrific flow and sticks to the Harlequin Presents sensibility while offering a slightly more evolved hero and a truly entertaining, quick read. I’m really looking forward to reading more from you, I think you’ve got a really bright future in the genre. Final grade: B+