REVIEW: The Devil You Know by Trish Doller 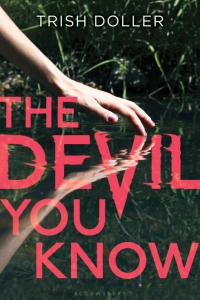 My introduction to your books was Something Like Normal, which was one of the very first new adult novels I ever read. I loved that novel and still think it captures the new adult experience very well. Your second novel, Where the Stars Still Shine, didn’t sound like my cup of tea so I skipped it, hoping the next one would be different. It was.

Life changed for eighteen-year-old Arcadia when her mother died of cancer. Assuming the maternal roles of the household, she takes care of her four-year-old brother and works a job to help keep things afloat. The added responsibility left her little time for anything else – including the soccer team and her boyfriend. To say she’s tired of being an adult is an understatement. She wants to be a teenager again.

She gets her chance when she meets two handsome cousins at a local party. While it’s Matt who initially catches her eye, it’s older Noah who holds her attention. The two are on a road trip and on a whim, they invite her to join them. It’s irresponsible and risky, but Arcadia wants to be wild and free so she accepts. But the road trip takes a deadly turn when one of the cousins reveals his true colors.

I think Arcadia captures the experience of an eighteen-year-old young woman. She’s legally an adult but isn’t quite ready to accept the responsibility that comes with that. I can’t blame her. When her mom died, she assumed the mother role and is practically raising her little brother and looking after her dad. While these things do happen in real life, it isn’t fair of her father to put that on her. Arcadia is the daughter, not the mother, and it’s not right to expect her to step into the role. I thought her reactions and feelings were 100% believable. She loves her little brother and doesn’t quite trust her father to take care of him by himself, but she sacrificed pieces of her own identity in the process. Between school, work, and taking care of the family, there just isn’t a lot of time for other things.

Coming from that place, I understand why she leapt at the chance to go on a road trip with Matt and Noah. Is it dangerous to go off with two strangers? Yes, absolutely. But Arcadia felt trapped and suffocated by her present circumstances. This was her chance to be a different, free-spirited Arcadia. The one she wanted to be, the young woman she could be. In terms of a woman discovering herself and what she wants from the world and herself, The Devil You Know tells a great story.

Where it falls down is the thriller aspects. That subplot didn’t feel organic to the rest of the story. There were plenty of hints and pieces thrown in, but rather than being woven into the narrative, they read like stones dropped into the middle of the plot. It might have something to do with the tone. There’s a big difference between a self-discovery tale and a twisty thriller in which you discover one of the people you’re traveling with is a murdering sociopath. Despite the hints placed throughout the book, the last third of the book still felt like it came out of nowhere.

I thought the romance between Arcadia and Noah was very well-done. You could feel their chemistry jump off the page. It was intense and a little scary because they just met each other. How can you feel something so strong so fast? I liked that both of them acknowledged this, though. By contrast, the bits with Matt felt awkward. I couldn’t decide if it was meant to be an actual love triangle or Matt played the role of the guy who came in distant second to Noah.

I hadn’t realized I’d been jonesing for a road trip book until The Devil You Know. That it focuses on a young woman’s journey makes the read even better. Even though I found some elements to be executed clumsily, I enjoyed this novel overall. I especially liked the resolution of Arcadia and Noah’s relationship. It fits these two people at the beginning of their adult lives. B

→ Jia
Previous article: I Watched and You’ll Never Believe What Happened Next (Not Really)
Next Post: DAILY DEALS: Shy guys and aggressive women