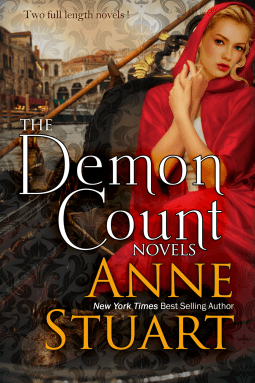 In a world of grandeur but also nightmarish evils, his dangerous passion drew her to him . . .
As soon as she arrives in Venice, golden-haired Charlotte Morrow is pursued by the city’s most dashing and celebrated men. Young and reckless, the orphaned English ward of a mysterious guardian expects a life of parties and adventure.
Instead she finds herself little better than a bird in a gilded cage at Edentide, her guardian’s immense palazzo on the Grand Canal. A “Ghoul of Venice” is terrorizing the city, draining beautiful young women of their blood. To Charlotte’s horror, her handsome, brooding guardian, whom she secretly calls the Demon Count, is considered a prime suspect. Every night in his mansion is a spine-tingling battle between passion and fear, as he draws her to him with irresistible desires and dark cravings.
Is he protecting her from the Ghoul, or savoring the prospect of her seduction and murder?

Years ago, back when these books were out of print and seriously expensive, I had pretty much given up on ever getting my hands on a copy of either one. Pay *that* much money through online used book stores or hope to eventually find a copy in a store near me? Not likely to happen. Luckily, I became friends with someone who owned copies of both books and she trusted me enough to be willing to loan them. Here’s lookin’ at ya PB! Anywho, though it’d been years since I read them, I still recalled how much campy, gothic fun they were.

“Mentally I reviewed my position. I was a golden English virgin of almost
twenty years, possessed of a large fortune and an evil guardian who was most
likely a murderer, a vampire, an embezzler, and a spy. I was also quite
stupidly attracted to the man. Or should I say creature?

I had further complicated my life by severing my ties with England and
placing myself in this monster’s hands then turning around and promising to
spy on him for the sake of my country and a young man’s lovely blue eyes and
broad shoulders. Two people I had known were dead, brutally murdered. Hidden in my room was perhaps incriminating evidence, evidence that could free me from the torturous hold Lucifero Alessandro del Zaglia had over me.” 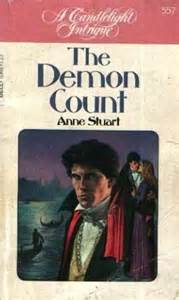 “The Demon Count” has the hallmarks of the genre – young, innocent heroine all alone in a strange, foreboding place up against evil and mayhem with a brooding, dark hero lurking in the background. And look at that original cover! Except wait a minute – the heroine might be innocent but she’s fiery and knows how to kick where it counts. Luc is mesmerizing and controlling but seemingly constantly exasperated by his young charge. There’s damp everywhere, unnerving servants and a cat that could probably masquerade as a small panther. And I’m having a ball reencountering them all.

This is like a gothic Stephanie Plum caught in the seething political unrest
of 1840 Venice, which is still in the hands of the Austrian government but wanted by the French as well. Charlotte Morrow blithely arrives despite her Venetian guardian’s instructions not to leave England and finds herself neck deep in big trouble. Is her guardian the demonic, evil creature that all Venice
appears to think he is? Who is the madman or mad creature who is killing young women and draining their blood before leaving their bodies to be found? Why won’t her guardian eat garlic, appear during the daylight hours or allow mirrors in his palazzo? What do Holger and Jean Baptiste want from her? Besides sex that is. Why have most of the servants fled leaving the palazzo a housekeeper’s nightmare? And is the 20 pound black cat with golden eyes just a house kitty or something more sinister?

I enjoy Charlotte despite her occasional idiotic actions which is a good thing since the book is told in first person. She’s (usually) intelligent (speaks 5 languages fluently and generally isn’t flustered by shouting men or secretive housekeepers) and has a biting humor that I love. It’s really only around the Demon Count that she turns a bit brainless but she can almost give as good as she gets there and manages to flay most other men. I do cut her some slack because I remember exactly how melodramatic 20 year olds can be and in her case, she actually has something to be melodramatic and overwrought about.

Now on to Count Lucifero Alessandro del Zaglia. He’s dictatorial, insufferable, autocratic and rude. God I love him. He’s your quintessential hero type and readers’ll either love him or loathe him. I can almost see him retreating to his dark bedchamber after an evening of dealing with whatever Charlotte will throw at him that day and resorting to copious amounts of strong liquor to fortify himself to do it all again the next. Sharp eyed readers will soon catch on to the fact that he adores her even if it takes Charlotte a while to do the same.

When I originally read the book my Big Question for myself was, “Is this book worth the money?” Since I like your dark heroes, don’t mind first person, and I could get into the campy, gothic, slightly over the top feel of it, the answer was yes. If readers don’t like all of the above or the heroine having momentary mental lapses when clutched to a manly (or demonly) chest or some “running around” and having a madman thrown in for fun at the end, nope, save your time.This book is a wild ride that I thoroughly enjoyed but I can see that it wouldn’t be for everyone. It still gets a B from me and at least new readers don’t have to pay those prices of yesteryear to find out for themselves.

A love for danger is bred in her blood.
Her willful passion sends her into the arms of a stranger.
It’s impossible for a young woman with Luciana’s passionate bloodlines to lead a boring, sheltered life in London. With her parents away on holiday, she and a small entourage escape to Venice, where the mystery, danger and romance of her mother and father’s early years have always beckoned.
Tall and raven-haired, the beauty is on a secret mission and is expecting to meet with compatriots. But the dangers surround her far more than she imagined, and her father’s aged palazzo is not the sanctuary she hoped for. Her only protection is an irresistible but mysterious stranger who captures her heart. His secrets tell him to keep his distance. But Luciana will get what she wants. She is, after all, the Demon Count’s daughter.

And now for the follow up novel. If “The Demon Count” is a gothic send up then “The Demon Count’s Daughter” rips spy novels to pieces. Actually it takes some swipes at mysteries as well. It’s been years since I read it as well but knowing not to take it at all seriously raised its grade for me this time around. 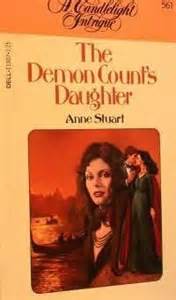 Luciana is that creature whom some romance readers don’t mind but whom others abhor, namely a modern woman in a period hooped skirt. She decides she wants something to be so and thus it must be. Conventions? She don’t need or heed no stinking conventions. Life is a game to be played, a lark to be done. I laughed however when she gets yanked by the Austrian authorities before even being in Venice for a few minutes as they already know who she is and seemingly why she’s there. It’s kind of like James Bond being a spy yet everyone knows how he takes his martinis.

The heroine, normally pluck to the backbone, somehow mysteriously
loses half her brain cells when in the presence of the hero. This leads her
to do dumb things. Lots of dumb things though somehow by the fact that God looks after fools and idiots she survives. As with the first book, it’s told in her first person POV so haters of that beware. Soon it got to be a game how many mistakes she could make and still not catch on to the reality of the situation in Venice. Let’s just gently say that neither she nor her mother were cut out to be spies.

Then there is her maidservant who seems more of an equal. I adored Maggie with her roving eye and lusty tastes in men. Wish we could have seen a bit more of that but given the brevity of the book no such luck. Still there’s no slut shaming here. Uncle Mark is basically useless but then he was the first time around too so no surprises there.

What I had forgotten about is how Lucy immediately knows her hero as soon as she claps eyes on him and the zeal with which she goes after him. Poor sap never stood a chance. The insta-love does, however, make the romance more believable in the shorter story length.

There are a few plot holes that become more evident as the book races to a close but that you just have to accept them and get on with life. The ending more than makes up for a lot. It’s definitely to be read as a tongue-in-cheek send up of OTT spy plots with a sideways glance at gothics as well. Knowing to treat it as such made this reading much more fun. B