Except for having m/m, action, and m/m action, this was a real change of pace from the previous Beecroft novellas I’ve read, all of which were Regencies. Impressively, not only is unusual setting beautifully realized, but the entire tone of the story is completely different. 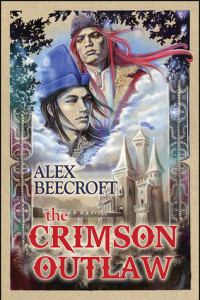 The time is 1720; the place is Harghita County, Transylvania. (I love the down-to-earth specificity of that, as well as the fact that this may be the first romance set in Transylvania which isn’t a paranormal.) The story is told from the point of view of Vali, the young and naive heir to the ruling Boyar. Although he has a contentious relationship with his father, he’s shocked to realize that Wadim is not the just ruler he thought, but a capricious tyrant. When Vali runs away and meets up with the outlaw Mihai, he finds not only an opportunity to address his father’s wrongs, but a kind of love he hasn’t even been able to dream of.

Even aside from the unfamiliar setting, this story takes a lot of risks: It’s a romance between an inexperienced 19 year old, and an older, stronger man with power over him. I thought the risks worked, mainly because the relationship is convincingly consensual, sex never occurs when Vali is overpowered, and the power imbalance between them continually shifts. Though the story does often play with the erotic possibilities of that imbalance — even at their first encounter, with Mihai holding a knife at his throat, Vali finds himself enjoying “the pressure from balls to lungs of a powerful, demanding warm body thoroughly dominating him… Lust added itself to terror in his panting breaths, and he despised himself and the bandit indiscriminately.”

Vali, perhaps like many people afraid to express their true sexuality, has actually had a captivity fantasy:

In his mind it had been a Turkish jail… one night, when he was at death’s door, the jailor had come to him… he had pinned Vali’s still-defiant fists above his head in one great hand, stripped him with the other — slowly, looking and touching every inch, ignoring Vali’s fervent protests along the way.

Then he would turn onto his stomach and think of being spread and speared, his struggle turning into surrender and then wanton enjoyment as he stroked himself… and that he was helpless, helpless to stop any of it.

But Vali isn’t always helpless; he’s got wealth, status, and extremely good fighting skills on his side. And Mihai doesn’t literally fulfill this fantasy, which Vali had already realized was ruined by the reality of prison.  After they begin a sexual relationship, Vali sees the downside of being with someone stronger than he is:

Mihai had jumped down, landing on his feet, and got hold of him again before he could move, dragging him like a deer carcass off towards the wood.

‘I must help! Let me go!’ The strength that had seemed so glorious only moments ago felt like a curse now that it wasn’t doing what Vali wanted it to do.

But even when they enjoy a hostage fantasy together, their sexual encounters have a genuine sweetness to them — especially the first one, because Vali is so happy and eager, taking the cynical Mihai by surprise:

Mihai was biting his own lip, his eyes closed, his hips driving his prick into Vali’s hand in angry little jerks. He startled back almost in fright when Vali kissed him and their eyes met. In a flash of understanding, Vali watched Mihai’s expression deepen and soften, as though he had expected no intimacy from this and Vali’s trust had taken him aback.

Despite its length, this novella was surprisingly immersive. It seemed like almost every sentence placed me firmly there — not in a strained, guide-booky way, but just in relating the small details of life: “While Mihai dozed in a patch of sunshine, Vali built a bed for them there–a hollow in the hay thickly lined with sheepskin and covered in extravagantly woven red blankets with black, yellow and white stripes.”  Just a simple visual, but it takes me to that cozy scene, and shows the trust building in their relationship.

The complex relationship between Vali and his father was also well expressed, and there’s an intriguing small sideplot about his sister, who is far less romantic than Vali, and not narratively punished for it. It’s the primary relationship that gets shortchanged by the length of the story — it worked for me, but there just wasn’t enough of it. Time I wanted to see spent on the couple experiencing love was instead given over to the plot. The fast pace of the story is also disconcerting; Vali constantly bounces back from physical abuse and right into his next adventure, almost with the speed of Wile E. Coyote.

I would definitely recommend this to anyone yearning for a change from the standard settings of romance, and for readers who enjoy action and adventure. My gut rating for it as a romance is B-, but because of its many fine and unusual qualities, I’m rounding it up to a B.