As I started this, wondering if it would grab me as much as the previous books in the series, I came across this line: “He had to form himself back up out of a puddle behind the counter after that laugh. He hoped he was subtle about it, and she didn’t realize he had melted to the floor.” And there I was, sucked in again. 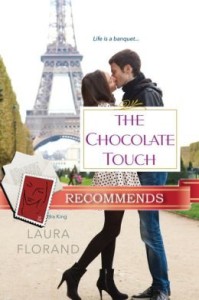 This is the essence of romance, Florand-style. The characters are so extravagant — they have feelings, and they have them all over the place. They care about art and beauty and embody those feelings in the creation of delicious food and delicious sex. Incidentally, Dominique Richard had barely spoken to Jaime when he had that thought about her. But when she asks him two weeks later how long they’ve known each other, he says “a month” — “didn’t she realize that those two weeks she’d sat in his salon counted as knowing him?” Chocolate maker Dom fell in love with Jaime while he watched her sitting in his salon eating his creations, “as if his very existence made up her happiness, as if she could spend hours soaking him in and still want more of him.” In Florand’s Paris, this is all it takes — this is everything.

Darker in tone than the previous books — even Dom’s chocolates are called “dark and cruel” by critics — The Chocolate Touch is about two wounded people. Chocolate industry heiress Jaime’s self-worth is wrapped up in activism and helping others, and after a traumatic event she no longer feels capable of it. (Did you know the chocolate industry uses child and slave labor? Like I said, dark. And potentially life-changing, if you like chocolate. And freedom.)  Dom grew up with violence, and fears replicating it if he ever forms a real relationship. (Astonishingly, this is something he’s working on in therapy, which makes him pretty much a romance novel unicorn.) Their mutual low self-esteem makes it hard for them to understand how they’ve wound up together and what it means.

Their romance left me just a little uncertain. Is their love based on anything lasting? Are they too needy and codependent? It helps that they’re aware of this problem themselves:

He saw her sitting in his salon, the still, absorbed focus of her. She had him. He was her healing. Thinking about it that way made him a little uneasy. He could feed her senses and her body, he could warm her, he could let her soak up everything she wanted from him. But… he wasn’t a doctor.

Later, Jaime promises him, “I will get stronger than this.”

Even so, I wasn’t as completely convinced of Happy Ever After as I like to be at the end of a romance. One of the aspects I loved about the previous Amour et Chocolat books is that the main characters were always on the same wavelength (whether they realized it or not.) It’s partly why the stories feel so magical — the whimsical metaphors or outrageous plans are a shared insanity on their journey to each other. There was less of that here, and less of the enchanting writing that expressed it. Instead, there’s more of an emphasis on physical sensuality — which is also gorgeously written, in that way that sort of creeps through my entire body and makes me shiver with delight. But it doesn’t have that inevitable feeling.

There are plenty of funny parts (falling for Jaime, sister of the heroine of The Chocolate Thief,  puts Dom in the position of in-law to one of his most hated rivals and the makers of mass produced American chocolates!) but even the offbeat, imaginative touches often go in a darker direction:

Sometimes he still stood in the little corner of glass and stone, smearing chocolate prints against the glass as he watched her, the poor child outside the candy shop he couldn’t quite believe he had the right to enter. The size of his chocolate prints, compared to the foggy ones they often had to wipe off the front of his own windows was… humiliating. Like his insides should really have grown at the same rate as his outsides.

Don’t you just want to kiss him on the nose and say “poor sweet baby”? My heart broke for Dom, even more when he thinks, “Even when he was six years old, the people who loved him thought he deserved what he got.” And Jaime is very touching and appealing as well. Even with some quibbles, it was lovely to see the tenderness they found with each other, and I finished the book with the precious and elusive Happy Sigh. B