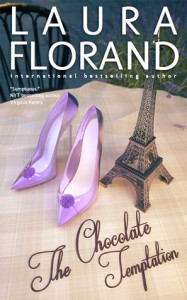 It’s always fun for me to see what will turn up in a Florand book; I hadn’t seen the cover before I started reading, so the fairy tale allusions here snuck up on me. (Hmmm…. Sarah is working on spun sugar slippers…) But there was another surprise in store, because this is not your usual Cinderella story. As always, there’s a clue in the names: Patrick and Sarah, “nobleman” and “princess.” Patrick is definitely a prince… but he’s not necessary to turn Sarah into a princess.

The story takes place concurrently with that of The Chocolate Heart (which made me a little sorry I hadn’t read that first, but it’s not vital.) In a busy restaurant in Paris, pastry chef intern Sarah Lin spends her days fiercely trying to perfect her techniques and fiercely hating her supervisor, Patrick Chevalier. (Heh… I hadn’t even noticed his last name!) Patrick’s gorgeous,  effortless perfection is galling for someone struggling under a heavy weight of disappointed family expectations and survivor’s guilt, and his seemingly casual flirtation drives her mad:

“Sarabelle,” he called laughingly, and she hated him for that, too. The way her ordinary, serious American name turned so exotic and caressing with those French Rs and dulcet Ahs, like a sigh of rich silk all over her skin. The way he added belle onto it, whenever it struck his fancy, as if that couldn’t break someone’s heart, to be convinced someone like him thought she was belle and then realize he thought everybody was belle. He probably called his dog belle, and his four-year-old niece belle when he ruffled her hair. And they both probably looked up at him with helpless melting, too.

Sarah completely discounts Patrick’s continuous care of her — the way he always makes sure she’s fed during their crazy workdays, his quick massages to ease her tense muscles, his constant encouragement. She has no idea that he’s trying to show his feelings in the only way he knows how. Not only is he her boss, in an intensely competitive field, but his own family issues make him approach everything through manipulation rather than directness: “Don’t show you want it. Never show how much you want it.” And he wants Sarah so desperately, he can’t convince himself to be noble. When his boss Luc challenges him about his behavior, Patrick thinks to himself, “I’m not harassing her, really. If she told me to stop, I’d… change my technique.”

I often have trouble with romances in which characters doesn’t think much of themselves — I tend to take them at their own valuation. Although Sarah’s self-esteem is low as only a perfectionist’s can be, The Chocolate Temptation succeeded in making me see why Patrick is so smitten with her. At first, all he can do is constantly tell her she’s pretty, but it’s really her directness and intense focus that beguile him. Sarah’s sense of being ordinary and doing everything wrong gets tiring — in fact, both of their big emotional issues do, because they both think about them all the time – but her seriousness and dedication charmed me as well. And interestingly, although she may feel humble, Sarah completely rejects the role of Cinderella to Patrick’s Prince Charming. There’s quite another role for her in that story, as she and Patrick will discover together. (Though if you relish conventional romance trappings, have no fear. Paris, The Eiffel Tower, Valentine’s Day… I’ll leave it at that.)

Despite his manipulations, Patrick is so smitten and so genuinely kind that he’s almost equally adorable. Their sex scenes are gorgeously sensual and emotional, and told in such fresh language they can go on for pages without getting dull. They’re also often a place of conflict and negotiation, because of the real and perceived power issues between them: “They were not equals. She didn’t have the right to fall in love with him…. she liked him taking over, to be honest, but it left her in a very strange place.”

I was slightly discomforted by their dynamic — him so perfect and golden to her, her so small and pretty to him — because Sarah is half Korean. (Her mother immigrated from North Korea, a highly traumatic experience.) But that may well be me being oversensitive to possible stereotypes because I’m worried about missing them. Sarah’s overachieving character could certainly be seen as stereotypical, but she’s given a lot of background history that makes it feel very specific to her situation. That history is problematic though; Sarah is a self-described Anchor child (a pejorative term, and though thematically interesting, not that likely a situation.) I discussed this with Sunita and she pointed out several ways in which the backstory strained credulity. Also, Patrick likes to tease Sarah by deliberately mixing up elements from different Asian cultures, which I think is intended to show how little importance it has to them, but I’m not sure someone who’s actually had to deal with racist microaggressions would be as patient about it as Sarah is. Overall, I didn’t get the feeling that their attraction was about her being Asian and him being white — I believed that Patrick loves her smallness because he loves her, not the other way around — but another reader with a different background might be more bothered than I was.

There are more complex themes going on in the story than I can mention, and sometimes the book felt overcrowded with meaning and revelations. I think it could have been tightened up, but it’s very sweet and fun to read. B

→ Willaful
Previous article: REVIEW: Rome by Jay Crownover
Next Post: Monday News: Blogging and free speech; pink is an illusion; historical romance in print; the ethics of using another author’s platform; and more on net neutrality