Earlier this year I read your debut fantasy novel, The Hundred Thousand Kingdoms, and enjoyed it quite a bit. So when it came time for your sophomore effort to be released, I made sure to request a copy. The Broken Kingdoms is the second book of the Inheritance Trilogy, of which The Hundred Thousand Kingdoms was the first. It’s not a direct sequel; the protagonist is not Yeine Darr. But it is related, and events of the first book set the stage for this one. I’ll try my best to keep spoilers for the first book to a minimum but as a warning, that’s not always possible. 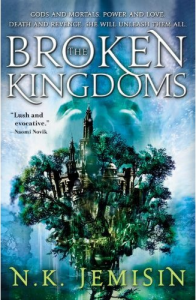 Oree Shoth is a blind artist who lives in the city of Shadow, which rests beneath the city of Sky. Well, I suppose it’s more accurate to say Oree is blind to everything except magic, which she can see. This quirk proves to be useful. In the decade since the events of Hundred Thousand Kingdoms, godlings have returned to the world. Some of them even live in Shadow. Oree’s ex-lover, in fact, was a godling himself.

Suffice it to say, Oree’s used to gods and godlings. Which is a good thing because one day, she finds a strange man in a garbage heap and takes him home. As you do. Now what do I mean by strange? I mean that he has an odd habit of dying and coming back to life. And not in the vampire or zombie sort of way. Even stranger, when the sun rises at dawn, Oree can see him because he… glows. I imagine people who’ve read the previous book can probably guess who this person is.

Meanwhile, godlings are being killed all over Shadow. This isn’t good because Nahadoth, the newly reinstated Nightlord, doesn’t take kindly to people murdering his children. Completely understandable. Unfortunately, when you’re the Nightlord and are infamous for destroying an entire continent and most of its people, paternal anger takes on a whole new light.

And so an ultimatum is delivered: find the murderer or the Nightlord will come to Shadow. No one wants the Nightlord to come to Shadow. Unfortunately for Oree, who found one of the dead godlings, this means she’s suddenly become a prime suspect and the focus of intense scrutiny. Scrutiny, might I note, that will eventually lead to revelations regarding her heritage and bloodline.

In many respects, I think Broken Kingdoms is more even than its predecessor. I can’t say for sure if that impression is because I came into this book with no expectations based on the cover copy. It is a quieter book in the sense that it doesn’t take place in a royal court. There is no battle for succession. I did not expect political intrigue and for the most part, that was indeed true. Oree is simply a blind artist who came to the city and makes a living selling novelty items. But I think that quietness is also the book’s strength. It portrays a mundane daily life made magical, by virtue of who Oree is and the people with which she surrounds herself.

Since this is set a decade after the culminating events of the previous book, it was interesting to see how things had changed and how things had stayed the same. In the previous book, the world followed one religion, that of Itempas, the sun god. With the return of the Nightlord and the Grey Lady, as well as many new godlings, it should come as no surprise to anyone that the iron control of the Itempan religion is not as it once was. Many people worship other gods. Some people dislike this. Some people would like a return to the old ways. And some others want to take things a step further and form a radical sect of the original religion. I enjoyed that aspect of it.

Much like Hundred Thousand Kingdoms, the narrative style of Broken Kingdoms is similar to that of oral storytelling. I don’t think the prose is quite as striking here, less dramatic if you will. On the other hand, I don’t think it needed to be. Oree’s story isn’t one of rulers and family dynasties and returning lost gods to the world. It’s more comforting in a way. And unlike its predecessor, however, the narrative style isn’t tied as closely to the plot and readers won’t learn the reason for it until the very end.

As for the ending itself, I expect this is the part that will get the most commentary and reaction from readers. Up until the climax of the novel, the plot featured a smooth pace that carried me along effortlessly. After the climax, however, the narrative became very choppy for me and what followed was a series of what could be called successive endings. The best comparison is to the ending of Return of the King. You’d think you were reading one ending… but then another would follow. And another. And another. I don’t know if this was deliberate — and if it was, it was very successful — but the effect was very jarring, to the point that some of these “endings” felt tacked on. I also think a certain aspect of the ending was cliche and borderline indulgent. I don’t know if it’s just me, and perhaps it is, but I expected better and more. I myself was not thrilled with it for those reasons.

But since this is a romance blog, I do think I would be remiss not to offer up the details of that ending because the second I finished this book, I emailed Jane. Jane read Hundred Thousand Kingdoms based on my opinion and was waiting for my thoughts on this book before picking it up as well. So when I finished, I knew I had to email her because the ending would not make her happy. I will make use of our spoiler tag so please, skip the paragraph that is about to follow if you wish to remain spoiler-free. It is for the ending of the novel, so please heed my warning.

[spoiler effect=”blind”]Oree eventually gets together with Shiny, who if you’ve read the previous book and picked up on my hints, is Itempas in mortal form, after the punishment laid down upon him by Yeine, who has become the new Grey Lady. But making Itempas a mortal was supposed to be a punishment that would last a long time, not eleven years. It’s not much of a trial if Itempas can find something of a contented life with Oree. So due to pressure from Yeine and Nahadoth, Itempas leaves Oree. Now, I personally don’t find this particular separation to be that surprising. I spent the majority of the book skeptical about whether Oree and Itempas would actually get together and when they did, I knew it couldn’t last. The part I found cliche is that not only does Itempas leave, Oree finds herself pregnant with his child. Romance readers, of course, are very familiar with this trope but it is most often found at the beginning of a novel, not the end. And for that reason, because this book ends with the couple separated and the woman pregnant with a child to remember the father by, I can’t not mention it. Because I know it will disappoint some readers.[/spoiler]

To be clear, this is a fantasy novel and not a romance. I don’t think it’s fair to expect an HEA because this genre does not guarantee it. But reader preferences are reader preferences, and those preferences often carry over from one genre to the next. I simply wanted to offer up the details for those who wanted them because I know what it’s like to be enjoying a book, only to reach the end and have that experience be ruined by what was presented in those final pages. I think Jane has blogged about those moments here on DA in the past.

This is a solid follow-up to what I considered a great debut. Many of the quibbles I had with the first novel have been smoothed over and polished here, although I think the ending is still a little rough, if only in the other direction (choppy and dragged out rather than rushed and cramped). I just wish the ending hadn’t been so cliche and uninspiring, but perhaps this will lead into the final book of the Inheritance trilogy, The Kingdom of Gods. One can only hope. As for a grade, I’m assigning one based on it being a fantasy novel. I imagine romance readers would have a different opinion. B