REVIEW: The Bro-Magnet by Lauren Baratz-Logsted

Updated: It is with regret that I add this addendum. Ms. Baratz Logsted wrote a post promoting the blog of a known plagiarist.  We take plagiarism very seriously. I won’t remove the review, but I will provide this alert so that others can make a decision about how they want to spend their time and money.

I saw this book on NetGalley and requested it immediately. I started laughing about about 5 paragraphs in and didn’t stop. Johnny Smith is a guy’s guy. He loves sports. He belches at the table. He wears his baseball cap backward. He hosts a weekly poker game and has been the best man 8 times. He’s like the Pied Piper of men. Yet this has not translated into many women for him. Instead he is 33 years old, single and with no female opportunities. He was interested in law at one time, but did not pursue a degree because his father fell ill and Johnny came back to take over his father’s painting business.  (Reading Johnny’s thoughts about color on the walls was a hilarity all on its own).  His oldest friend, Billy, has just married Johnny’s next door neighbor Alice, who in another book would be Johnny’s love interest. I admit wondering whether Billy and Alice would be getting a divorce. Alas no. 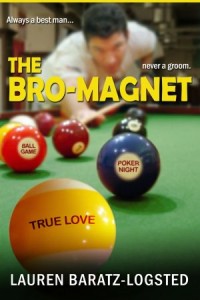 Johnny is in a rut. He wants to find a nice girl, settle down and get married but being a guy’s guy hasn’t worked out for him.  Everywhere Johnny goes, guys fall in best friend love with him and Johnny goes through a litany of things to show how men think he is awesome whereas women just view him as an asshole.

Exhibit 1: The One with All the Cars: Between the ages of sixteen and twenty-two, I owned a total of twenty-five cars. Not all at once and sometimes not even all by myself; a few of those cars I owned jointly with Billy Keller. See, the thing is, I couldn’t see the point in driving anything new or even remotely new. I excel at understanding what’s going on under the hood and I loved the challenge of finding the clunkiest clunker I could find – more than one of those cars was discovered in The Penny-Saver – and then doing the necessary work to get that baby on the road. Put in a little more work, and not only were those cars drivable but also profitable when I’d turn around and resell them. My proudest acquisition? A VW that Billy and I purchased jointly for twenty-five dollars. It’s amazing what a little duct tape and a few strategically placed rubber bands can do for a car!

The thing those twenty-five cars all had in common was that no matter how much work I put in, no matter how good a mechanic I was and still am, they all each would break down at least once, often at inopportune times, like say on dates.
Guys’ Verdict: “How cool! You get to tool around town in a different car every few months. You avoid the high costs of buying new or good used, thereby having more money to spend on partying or prime tickets to ballgames. You beat the system by never having to pay high insurance or taxes on your vehicles. Coolest. Guy. Ever.”

I’m not convinced that Johnny is an accurate rendition of any one guy.  He is likely a caricature of some sort but he’s a consistent one.  Johnny recognizes that neither himself nor his BFF Sam are going to get Johnny a girl so he turns to the wives of his buddies and through them, he changes his name (no girl wants to date a guy whose name ends in the long e sound); buys new clothes (He’s surprised at how well the J Crew attire actually looks on him); redecorates his house (the throw pillow scene at the home store made me laugh out loud); and gets a cat (the cat procurement scene is possibly the best in the book).  Morever, Johnny, err, John must suppress all affection for sports.  Johnny also asks advice from the elderly owner of the coffee shop; the guy who fits his rental tux; and just about any one else who will give an opinion on what makes relationships work.

He meets and dates Helen, an assistant district attorney.  What is obvious to readers is that Helen is not the type of girl that probably expects a guy to have throw pillows, enjoy opera, and have a cat but Johnny is too busy transforming the exterior of his person and suppressing his supposedly baser character traits to notice.  What leaks through, however, is what a genuine guy Johnny is.  He really wants to change. He really wants to settle down.  He works had at making sure that Helen is having fun and is happy.  What makes guys love Johnny made me love him too. To wit, he was a self deprecating guy who didn’t take himself too seriously but really enjoyed people.  The truth is that Helen and John are single not because they are misfits but because they haven’t met the right person and, well, both are really bad at dating.

This is Johnny’s transformation, though, and Helen remains somewhat of a mystery.  I thought the story did a good job of showing the mystery of both the man and the woman. It represented how everyone is different and that everyone’s match is different.  John would never have been happy with Alice. Sports was a big part of his life.  Wearing J Crew plaid shirts and removing his ball cap and tossing some throw pillows on the sofa were cosmetic and something fairly easy to adopt but Johnny cannot change what is essentially him. The good thing is that he doesn’t have to.  B

PS. The title and cover  are off-putting.

PPS.  I have to include the pet store scene:

The guy brings down the item and places it on the counter next to the rest of my stuff. “So you’re getting a cat and a dog?” he says.

“Then what do you want a leash for?”

“Don’t even bother,” Sam cuts him off. “He’s probably got this whole thing pictured in his head: him walking down the street, his cool new sleek black cat on the leash strutting by his side, maybe the two of them popping into the neighborhood bar for an ice cold beer for him and a saucer of milk for his furry little friend.”

Really? Am I that transparent?

The guy breaks out in a wide smile. “Man, that’s the coolest thing I’ve ever heard. I never thought to do that with a cat before. Maybe I should get one.”