Last year I gave the first two books in this series A- grades. And ever since then I’ve been eagerly waiting for Chessie’s chance to find her Mr. Perfect after being left at the altar by Mr. Asshole. Would there be revenge? Or public humiliation? Or would MaryLou work her matchmaking magic again to get us a satisfying ending? I had to wait a while to find out and the results aren’t quite up to the two previous books but I’m still fairly happy by the end.

As proprietor of the Second-Chance Bridal salon, Chessie Burton couldn’t exactly avoid thinking about weddings. But her good friends’ quest to find her a man had her running for cover. Her safe haven used to be her store, until renovator Jace Edwards—and his hammer, nails and very naked chest—invaded her space. 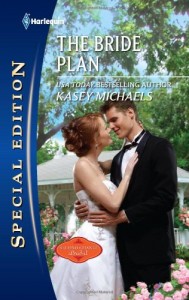 Soon Jace found himself wanting to be the only man in Chessie’s life—but he’d walked down the aisle once before and vowed never to do so again. So how could he keep things light with a woman whose business was marriage? Especially once her friends dubbed him the perfect groom-to-be!

Chessie got publicly walloped by her ex-fiance in that he left her an hour before the altar but she turned lemons into lemonade. She acted graciously at the time and has built a business out of her experience which she loves and is good at. Her triumph is her best revenge. When Rick returns, Chessie doesn’t go to pieces, she doesn’t agonize over him, she doesn’t turn stupid – she ignores him. Until he pressures her into meeting and even then, she quickly realizes that she’s grown past what happened, she isn’t going to dwell on it nor allow it to take over or dictate her responses. She acts maturely, like a woman with the sense and smarts to run her own business.

So Chessie has moved on from her first engagement, learned and matured. Jace has too. He acknowledges his responsibility in the failure of his first marriage and is wary of a second one. I love Jace’s initial thoughts on the store and the clientele they cater to – Strike Two Bridal for 1st time losers. As a romance hero he can’t be a total shit so I can accept that his fault during the first marriage lay in the fact that he was trying to established his business and taking classes thus having little time for a the demands of a relationship. I like that he shows his concern in X-chromosome ways – by puttering around Chessie’s house fixing things and deciding that she needs an alarm system.

They have the proverbial “one night of hot sex to get the other out of their systems.” Frankly I’m tired of this though it seems to be a standard romance trope I’m going to have to deal with. They then have to deal with the fallout in how they feel about this and where their relationship stands. Both are dissatisfied with the decision to just have that one night with no strings or expectations. They have some Men are from Mars and Women from Venus awkward moments afterwards as they misunderstand what the other is thinking but! they then move forward and decide to get to know the other. Despite the fact that they can “Booh” and “Yah” with the best of them, both realize that though sex is great it’s not the whole of a relationship and forge ahead to discover the rest of the other.

MaryLou is a sneaky woman. I know someone like her and love that person. Her instincts about Jace bordered on slightly stereotypical – he’s a he man just because he’s a carpenter/contractor? He’s all man because he wears a tool belt? Thankfully ML has other instincts to back up why she thought Jace would be good for Chessie in that they’re both driven people, have started and nurtured their own businesses, etc because the initial reasons don’t sit well with me. However, I do approve of the fact that ML got Chessie to spill the beans to Jace about meeting Rick. For their relationship to have a hope in surviving, the boards need to be cleared and secrets like this aired and dealt with.

Other characters from first two books are revisited and take part in this book but don’t overwhelm the story or muscle Jace and Chessie out of the spotlight so we can find out how deliriously happy they are. This also makes me happy.

It’s not that this isn’t a good book but it’s hard to maintain a series and unfortunately it shows here. Though perhaps some of my disappointment is due to the fact that the first two were so strong. And maybe because I have been waiting for this one … and waiting and waiting. No – I’m not impatient, not me. I liked Chessie and Jace’s road to their HEA but I didn’t love it with the warm furry bunny love of the first two books. B