I snatched up your debut novel, The Drowning City, when it was published last year. I’d been anticipating its release since the acquisition announcement. Traditional fantasy books about female necromancers? Sign me up! Unfortunately, the reality didn’t live up to my hopes and I found myself unable to get into it at all. It wasn’t until a couple months ago that I was finally able to finish it. Based on that novel alone, I probably would never have picked up another one of your novels. But then I saw that your sophomore effort, The Bone Palace, was getting good reviews on various venues. Enough that I grew curious enough to give your work another try. I’m very glad I made that decision. 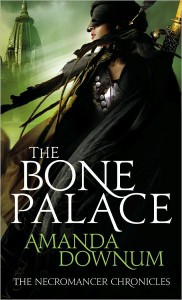 A few years after the events of The Drowning City, Isyllt Iskaldur is still a necromancer serving as an agent of the Crown. When a young prostitute is found murdered, Isyllt is the one sent to investigate. Good thing because the dead woman had in her possession a ring that once belonged to the nation’s beloved, but very dead, queen. In fact, the pretty bauble should still be in her tomb.

That little fact doesn’t leave many suspects, so Isyllt looks into the current affairs of the vampires who live beneath the city. Time is of the essence because the king is somewhat sensitive about matters involving his dead wife and while he’s currently out of the country, waging a war, he’s expected to return shortly. It’s in everyone’s best interest that the matter be taken care of before he finds out his wife’s tomb was desecrated.

Thankfully, Isyllt is able to gather enough information to resolve the case to the Crown’s satisfaction with the king none the wiser. But Isyllt finds herself unable to let go — even more so when she learns other young immigrant women have been vanishing off the streets and turning up dead elsewhere. Some pieces just don’t add up, and her continued investigation leads to a web of intrigue filled with lies and secrets, spanning back several decades.

While Isyllt investigates murders outside the palace, Savedra Severos, royal concubine to the prince, deals with assassination attempts inside it. Many members of the other noble houses were angered when, instead of choosing a daughter from one of their number, the king married his son off to a foreign, barbarian princess. But Savedra’s attempts to discern the people responsible leads her to an even bigger puzzle: a woman bearing her family’s name that no one remembers. Even odder, no books hold any mention of who this woman might be, not even the family records. Or perhaps more accurately, no books within her reach because Savedra’s quest for knowledge soon reveals that nearly every book that may hold the key to the woman’s identity is missing.

Where Isyllt’s and Savedra’s storylines intersect rests a vast conspiracy involving things both human and not, the political and the magical, the living and the dead, and love and revenge. And to Isyllt’s everlasting regret, her mentor, teacher, and former lover, the royal spymaster Kiril Orfion stands at the heart of it.

How glad am I that I gave your work another try! If I hadn’t, I would have missed out on a very refreshing read. I simply loved how many women were found in the pages of this book. Not just in major roles but also in background roles as well! Any long-time fantasy reader will know that it’s been an uphill slog to get equal representation of the sexes in the genre, let alone representations that don’t reduce female characters to damsels in distress or targets of victimization. Even when we find strong female characters, there are often only a few of them against an army of male characters. The Bone Palace upends that convention and I am glad for it.

Even better, there are women of all kinds: immigrants like Isyllt and the missing girls, women of color like the police investigator, transgendered women like Savedra, an unorthodox princess who loves to fight but who isn’t reduced to the tomboy archetype. And not only that, but there were relationships between them, relationships that were not based on competition and jealousy — even between Savedra and the princess! In addition, there are sexualities of all kinds. It’s all really just wonderful to see and read, especially when none of these things are treated as out of the ordinary and no one is made out to be a freak. Because let’s be honest, other novels involving trans characters often reduce them to such roles.

Another thing I loved were the vampires. These are not the sexy men and women urban fantasy and paranormal romance have made popular as of late. These are monsters. Creepy monsters with alien ways of thinking. And I loved how terrifying the vampire queens were. (Oh yes, did I mention that there were vampire women as well?)

I also thought the setting was used to great effect. There are lots of creepy undertones, what with vampires living under the city, many haunted locations, and nasty, malicious magic. The last item also extends to the antagonist whose use of magical abilities were innovative and original.

I was very ambivalent about the relationship between Isyllt and Kiril. I think I was meant to be more invested in it based on what I read in the narrative, but I honestly didn’t care about the state of it. It had nothing to do with the age difference. It didn’t even have anything to do with the fact that he was her teacher and she was his student. Maybe if we’d actually seen that, I would have been repulsed but it was far enough in the past and we’d seen enough from Isyllt’s perspective to know that she was the instigator, that it didn’t bother. I wish I could have been more interested in the relationship because I think it would have made the novel’s climax more hard-hitting. As it was, I simply rolled my eyes at Isyllt and what she chose to do.

In the end, I’m glad I gave your work another try because I would have missed out on a great read. As far as I’m concerned, this is a step up from your previous endeavor. Best part of all? It’s a genuinely standalone novel, a rarity in fantasy these days, so no previous knowledge of The Drowning City is required to give this one a try. B