REVIEW: The Betrayal of the Blood Lily by Lauren Willig

I’m late, I’m late, I know I’m late in getting to and reading this installment in the “Pink Carnation” series but after my slight disappointment with “Night Jasmine” I’ll be honest and say I wasn’t eager to jump into it. Now that I have, I will cheerfully say it’s my bad that I waited so long. 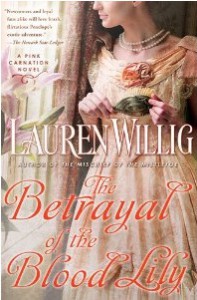 Penelope Staines, nee Deveraux, is stuck with the results of her flirting and outrageous behavior. The tabbies of the ton got what they were waiting for when she was caught with Lord Frederick and the Dowager Duchess of Dovedale ramroded the marriage into being. In order to try and avoid the scandal surrounding them, Lord and Lady Frederick head off to India where Freddie will be a special envoy to the Resident of Hyderabad.

Captain Alex Reid has the unhappy task of arranging transport and accompanying the pair to their new post. Alex is a long time resident of India, knows and loves the country, and also realizes that the political situation into which Freddie is headed is a powder keg just waiting for an idiot to set it off. And guess who Alex thinks the idiot is. He’s also not that impressed with Lady Frederick despite how well she can ride and the fact that she unhesitatingly dove into a river to save a servant. They’re both trouble – Alex just knows it.

Up to this point, Mary Alsworthy has been my favorite heroine. She still is, by a hair, but Penelope is going to give her a run for her money. Which surprised me a little since I didn’t particularly care much for her in “Night Jasmine.” But here we get to see into what makes Penelope tick and act as she does. Penelope is feisty but not stupid, speaks her mind, rides like a demon, can think on her feet and, after Charlotte, is a breath of fresh air. She’s a strong woman in a world where strong women aren’t admired but that doesn’t stop her. And any cobra who gets into her room better watch out because she’s a damn good shot.

Alex is a delight. He’s just the unconventional man who not only needs Penelope but is needed by her as well. He sees into her and realizes who she really is. These two are like tender and flint, no make that like a match to a keg of black powder. Even though each is initially suspicious of the other, and with good reason, together they are two halves of a whole. Any agitating warlords better watch out for these two. And I’m sure Alex will help Penelope practice her Hindi as well.

I also liked the flip on the usual practiced rake and innocent virgin scenario. Penelope is the one practiced in the arts of “come hither” and in using her feminine wiles to get what she wants. Alex is the initially “wooden at romance” character who has to be loosened up and coaxed into a relationship. And it’s here, when the coaxing works and the loosening is achieved, that some readers might baulk. I, however, applaud you.

The political situation in India at the time would probably need a PhD to keep it straight
though you do a good job in distilling it down. But still, there were times when I found my attention wandering. As complicated as the events were and as little as probably most Westerners know about it, I doubt it could be helped.

There is a lot going on in this book. The romance, the wilting marriage of Freddie and Penelope, Alex’s family, the political situation and, oh yeah almost forgot, the Marigold. This character and the importance of finding out who it is seem to get lost for long stretches of time as the other events muscle onto center stage. When this plot point is finally taken up again, it had almost slipped my mind. I do like the way Alex handles it all and agree with Penelope’s reasoning that it might not be perfect but it’s best all around answer to the mess.

I also enjoyed the modern part of this book better than the last one. Colin and Eloise are progressing despite Eloise’s faux pas in matchmaking. There’s also a bit more to Colin’s backstory in the form of a complicated familial relationship. I actually could have done with a bit more of them but perhaps that’s to come.

All in all, I like this book much better than “Night Jasmine” and am very enthused about continuing on in the series. Considering that you’re now up to book 7, 8 if the shorter book “Mistletoe” is counted in, that’s saying something. B