REVIEW: The Beginner’s Guide to Rakes by Suzanne Enoch

I’m not certain who named your book but I am convinced it is by someone who has never read it because you can tell by the first chapter that the heroine is no ingenue who needs lessons in handling men. The really wonderful thing about this book is the challenging heroine who blackmails, connives, and fraudulently achieves stability for herself in a world in which women can ordinarily only achieve security through birth, marriage or the selling of her person. 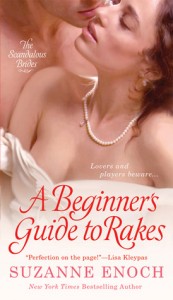 Diane Benchley’s family married her off to the Earl of Cameron, Frederick Benchley, a man who gambled so much that they had to flee England and then he died, leaving her destitute and alone in a foreign country. She sought solace in the arms of Oliver Warren in Vienna and she loved him.  Oliver Warren did not feel the same way and when  he inherited the marquisate, he ran away from Vienna without a word to Diane. Feeling battered, rejected, she picks up the pieces of her life after a bout of serious of depression and starts anew. Forging her husband’s signature, she bequeathes herself Adam House, an unentailed residence of the Benchleys. She creates an alliance with a notorious gamester, to provide with her 5,000 pounds to start a unique gaming house staffed by all women. The notorious gamester dies and leaves Diane in a fix.

She decides to blackmail Oliver Warren, now the Marquis of Haybury, into funding her start up costs and training her staff of women dealers.  Oliver agrees because Diane’s blackmail is fairly potent and because Oliver Warren has never really gotten over Diane.

Why this romance works is because neither Diane nor Oliver really care about society. What Oliver feared was being tied down to a traditional woman and while he may have had feelings for Diane, he did not want what he thought she represented and at the time that they had originally met, that may have been true but adversity had changed Diane into a different person with different perspective.

I loved that the heroine was the blackmailer this time rather than the hero.  It was a fun twist on an old trope.  Another fresh outlook was that Diane didn’t intend or really care about being a haven for women who are looking for a safe place but she becomes a haven.  Initially she wanted only safety and security for herself but she gained a certain amount of enjoyment as she began to see that her gaming club became safety and security for others (these are obviously heroines in future stories).

However, I would have liked to have seen more of the heroine’s road to self reliance. Her character arc seemed more about overcoming her fear of losing her independence and learning to trust again. His was more about coming to terms with his feelings.  One element I found odd throughout the story was the way in which Diane kept throwing how Oliver broke her heart back in her face.  I felt that showed her soft underbelly to someone whom she thought was cruel and heartless. Why would she expose herself repeatedly like that?

The hero was a bit more of a standard romance hero. Wealthy, bored, and dissatisfied. He liked the trappings of his title, the money, but he wasn’t interested in being part of polite society. He wasn’t looking forward to fulfilling the obligations of his new responsibility.

Oliver and Diane engage in not only a business partnership but a courtship with each one trying to keep the other off balance. Diane does a better job of this because she is now acting in a way outside of any woman in Oliver’s experience. While she often makes him fume, he can’t deny the appeal of this new cagey Diane.

When Diane’s enterprise starts to become profitable, her security is placed in jeopardy by her brother in law, the new Earl of Cameron who is suspicious of Diane’s inheritance of Adam House.   While this plot provided some suspense and urgency in the story, the way in which it was resolved was farcical.  Given the thoughtfulness of the rest of the story, the hamfisted way in which the danger to her finances etc was resolved put a pall over the ending. “Really” was all I could mutter when I read it.  This is a B read for me because of the smoothness of the prose, the freshness of the heroine, the ripe sexual tension.  But there are definite flaws throughout the plot that reduced my enjoyment so it could easily have been a B-.