REVIEW: The Bad Boy of Bluebonnet by Jessica Clare

KaetrinB ReviewsContemporary / novella / self-publishedComments Off on REVIEW: The Bad Boy of Bluebonnet by Jessica Clare 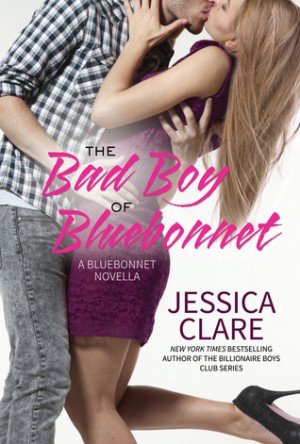 I bought this self-published novella for 99c. It’s book 4.5 in the Bluebonnet series but can be easily read as a stand-alone.

Emily Allard-Smith runs The Peppermint House, the only bed and breakfast in Bluebonnet. It doesn’t get many patrons but fortunately, she has enough money that it’s not a big deal for her. She loves to bake and generously shares her cakes, muffins and cookies with the local police and pretty much anyone else who wants them. She dreams of opening a bakery. I reckon she should. There aren’t enough bakeries in the world. This is my firm belief.

Her ex-husband Braden and she bought the old Victorian house as a fixer-upper when they were still married. But shortly after they moved in, Braden was offered his own reality tv show, ghost-hunting around the country. He took off and they divorced. She got the house in the settlement. Braden was always into ghosts and one of the things he always told Emily was that the house was haunted. She is lonely and this is only magnified when there are no guests staying at The Peppermint House. She regularly hears thumps and scrapes coming from the attic in the middle of the night and her lights flicker. She’s terrified Braden was right and there are actually ghosts. She’s worn out her welcome with the local police who generously attended her house a few times in the middle of the night to check (although, I must say they did a pretty ordinary job of it) and Braden is too far away and wouldn’t come anyway. In the middle of the night when she feels she can’t call on anyone for help, her loneliness is the worst.

Jericho Lozada has recently come to town and is staying with friends while he works out if there is enough business in Bluebonnet to sustain a handyman/plumber and while he decides if he likes it enough to stay. He looks like a bad boy – with tattoos and piercings, a mohawk and a Harley. Emily, on the surface at least, looks like his exact opposite. She’s buttoned up in old fashioned cardigans. Nevertheless, an attraction sparks when Jericho does some handiwork of the carpentry variety at The Peppermint House and she bakes him cookies. When she calls him in the middle of the night to check the attic he comes right on over and… let’s just say he solves a number of her problems. Ahem.

It’s sexy and fun and cute and a pleasant evening’s entertaining read without being anything particularly earth-shattering. It delivered exactly what it promised and that’s nothing to complain about.

The copy is mostly clean but there was a continuity error in that when Jericho comes over in the middle of the night he’s still wearing his Scooby-Doo sleep pants (adorbs!) but in the morning they’ve suddenly turned into jeans.

There is little conflict between Emily and Jericho once they start talking to one another and it works as a novella quite well. Braden is no serious threat to their happiness and that situation resolves quickly. I liked it and it’s certainly worth the 99c pricetag.  I give The Bad Boy of Bluebonnet a B.