REVIEW: The Anatomy of Death (aka A Dissection of Murder) by Felicity Young

“At the turn of the twentieth century, London’s political climate is in turmoil, as women fight for the right to vote. Dody McCleland has her own battles to fight. As England’s first female autopsy surgeon, she must prove herself as she proves that murder treats everyone equally.

After a heated women’s rights rally turns violent, an innocent suffragette is found murdered. When she examines the body, Dody McCleland is shocked to realize that the victim was a friend of her sister – fuelling her determination to uncover the cause of the protestor’s suspicious death.

For Dody, gathering clues from a body is often easier than handling the living – especially Chief Detective Inspector Pike. Pike is looking to get to the bottom of this case but has a hard time trusting anyone-including Dody. Determined to earn Pike’s trust and to find the killer, Dody will have to sort through real and imagined secrets. But if she’s not careful, she may end up on her own examination table.”

Is this to be the start of a new series? It seems like it and may I be selfishly honest and say that I hope so. I’ve got to get a replacement for my historical forensic mystery fix since Ariana Franklin’s death. 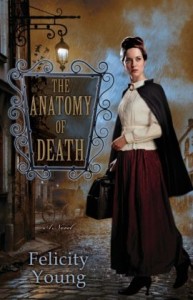 The story is chock full of lots of details about the time, place and events. I know a little about the British women’s suffragette movement but not much. The background info you provide is greatly appreciated and I think you accomplished easing it into the narrative without coming to a full stop to do so. I have to agree with Mrs. McClelland, Dody’s mother, that rights are fought for by the rich and privileged while food is the main worry of the poor and downtrodden. Lord love us with a father like Mr. McClelland.

Pike could have been written as a man with moody angst but instead he buttons it all up and holds it in. I think he’d be almost embarrassed to be seen as angstful, much like going outdoors in nothing but his drawers. He’s got just enough opposition and problems to deal with on the force balanced with his sense of purpose and seeking justice and the truth. I totally believe that he’s the kind of man who would feel ashamed of any tiny infraction so when he hides evidence that would show his own daughter is a wannabe suffragette, I feel his inner conflict over it. Chief Inspector Shepherd is a piggish “keep women in their places” type but Pike appears to know how to get around him and his roadblocks. I would hate to think that Churchill was in on all the police violence at the rally. Pike’s also human – he doesn’t always know how to get along with and speak to his teenage daughter and enjoys a night playing piano at the local pub. It all makes him more human to me and to Dody, once she learns all this.

Dody is strong minded enough to get through medical school and find a speciality that would accept her but practical about not rocking the medical boat. She’s also got her doubts about the tactics of the suffragette movement and the lengths toward which they’re headed. She keeps her head down and forges on, remaining as invisible as she can in order to get as far as she is able. One problem I had with her backstory was that I felt as if I stepped in halfway through Dody’s off again romance with Rupert the weenie. Frankly, I wasn’t sorry to see him go early in the story. Dody also has to contend with her fiery sister Florence who is totally on board with the more militant suffragettes who are ready to seek the advice of Fennians and resort to outright violence to further their cause and gain notoriety.

Dody and Pike are both outsiders – she because of her gender and her, frankly, cuckoo family while Pike was not a gentleman who rose to be an officer in the Army only to have that held against him in the Met. But they’re both truth seekers who don’t shirk from dirty work even if it’s hard to do and hard on them. They start to work together even before they realize it – each determined to get to the bottom of Lady Catherine Cartwright’s death and “helping” each other along by turning a blind eye to “after hours” sleuthing. Even if she doesn’t entirely trust him as a police officer and he is appalled at the suffragette movement. Each takes a sly dig at the other – he in presenting her with the details of the execution of Dr. Crippen and she in daring him to watch the forced feeding of the hunger striking women. Yet they’re both fighters, in their own way, determined to make a difference.

Forensic and police investigational science have certainly progressed and the conditions under which Dody and Pike have to work certainly highlights it. There definitely won’t be any Forensic Files type case cracking here. Nevertheless it’s all fascinating to read about and again shows how keen Pike and Dody are to take advantage of whatever might help them solve cases.

I have a silly question. Would an aristocratic family have the last name of Cartwright? Wouldn’t that be a laborer’s last name?

I tend to agree with Dody that slow but steady and not blowing up things is the way to seek positive social change but given the attitude of some of the men, it’s hard not to see how the more militant suffragettes arrived at their beliefs. Most of the secondary female characters served to illustrate one aspect or another of how the law still favored men even with the easier divorces now available. Dody’s dreary rounds at the hospital – dealing with women who died of septicemia from botched abortions or helping women suffering from the delivery their tenth child in that many years – showed another side of how hard it was to be a woman then. Even jail privileges are unequal. One thing that I realized early on was that due to the setting of the book (1910) I had to tamp down my disappointment that it wasn’t going to be in this book that the vote was won.

The mystery of who killed Lady Catherine is more something that propels other things in the plot than the main focus of it all yet I, along with Pike and Dody, still wanted to know the answer. And the answer is a wee bit anti climactic and soap opera-ish. The villain turns out to be one of those who change fairly quickly and suddenly start foaming at the mouth before conveniently spouting off about why they did what they did. Still the final section of the story unfolds in a way that slowly and relentlessly cranks up the tension. I knew what was coming and was still quickly flipping pages as Florence got deeper into trouble while Dody and Pike raced to save her.

As I mentioned at the beginning, I hope to see more of this series and am excited that you’ve chosen to set it during such a tumultuous era. Pike and Dody have caught my attention as professionals as well as – perhaps in the distant future – possible romantic partners. Only time will tell. B