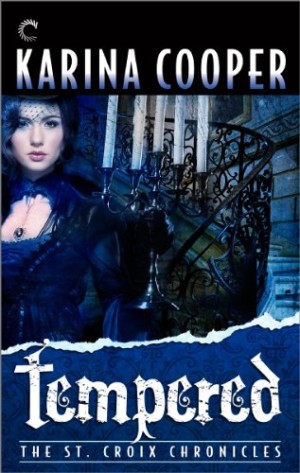 Once again I find myself writing to thank you for a compelling, if difficult to read story.  While relatively new to your writing – I stumbled on the second in the historical St. Croix Chronicles series by accident – I’m not a stranger to the love of a good, hard story.  No pun intended, of course.  You didn’t disappoint in the least with this fourth book in the series.

The end of the last book found our intrepid heroine in a carriage, bound for who knows where, with her erstwhile, if mostly absentee, guardian, Mr. Oliver Ashmore.  In this, we find our heroine fighting for her life once again (as if she hasn’t done that often enough) – though this time, it’s from a different foe.  Under Ashmore’s direction, Cherry St. Croix has no choice but to dry out and give up her opium addiction, far away from her beloved London streets.  It is, as anyone might imagine, a long and difficult road that unleashes the demons she’s tried to keep buried for so long.

Her convalescence isn’t without its upsides, however.  For the first time in quite a long time, she gets a chance to be free of those selfsame London’s streets, in a place where she is cared for – as much as someone in the throes of detox can be.  During her confinement, she’s reunited with her beloved friend, Maddy Ruth, and discovers that there certainly are things worse than what her father, and her past, have put her through.  Barely recovered, she must face demons of wholly different stripe, including the specter of her deceased mother and grandfather, as well as rediscovering that things aren’t always what they seem.

As I was reading, in the back of my mind I kept thinking of the title should have a subheading:  Cherry St. Croix Learns Alchemy – and Other Things She Never Wanted to Know.  I’m a fan of Jim Butcher.  I’m a fan of other writers who like to put their main characters through the wringer.  Yet I’ve never quite come across an author who thoroughly desiccates their characters with quite as much glee as you do – nor one who makes me feel just about every single thing the heroine does.  As Cherry was overcoming her addiction(s), I felt physically sick at times just reading about what she was going through.  It was raw and surprisingly real, for fiction.  I think some readers may have a bit of an issue with this – things aren’t sugar-coated, they aren’t couched in polite language.  You put it all out there, warts and all, for everyone to see.

But one thing I just love about your books is the way the reader can watch each painful step of Cherry’s growth and maturation process.  She’s been broken down and broken, many times, and yet she keeps coming back stronger than before.  Each word seems to be a handhold she’s grabbing to haul herself up out of the hellhole she called life before.  Each new skill she learns is something she needs – something the story needs.  There’s nothing gratuitous, nothing extra.

This book felt a bit like a transition novel.  We have the Cherry of before, as strong as she was, she was injured and, for the most part, at the end of being truly alive in so many ways.  And by the end of this book, there felt like a new hope, a new chapter in Cherry’s life that’s just beginning.  Of course, as with any book, there were a few things that I didn’t care too much for – though most of them were personal quibbles rather than any true issue with the work.  There were times when the story felt a little too convoluted, even for a paranormal historical romance.  And there were times when it felt less like a paranormal and more like a Regency gone bad – though some folks might like that kind of thing.  There were, however, just enough twists and turns to keep me reading and keep me wanting more.

I look forward with great anticipation to the next book in the series and again thank you for writing such wonderful, viscerally satisfying stories.  B