REVIEW: Starting Over by Sue Moorcroft 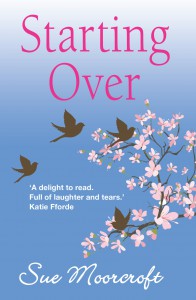 Since I’ve been having good luck with contemporary British authors lately, I decided to check out your latest book, “Starting Over.” Things were bubbling along nicely until right at the end when…well, we’ll get to that in a minute.

Tess Randell is starting over. Her fiance dumped her by email just days before their wedding, she miscarried then suffered physical after effects for months while living with her smothering parents – who also seemed to have more sympathy for the bastard ex-fiance then they should have. While driving to her newly purchased country cottage, she rear ends a wrecker and damages her car. Life just keeps getting better. < /sarcasm>

The owner of the wrecker tows her into town then helps her lug her stuff to her house after which Tess starts to try to assimilate into her new life. New town, new house, new people around her but same old friction with her parents and, amazingly, old fiance showing up looking contrite. Will Tess take him back, settle for just being friends with a new possible someone or dare to try one more time for love?

Even though this initially sounds like a first person Chick Lit book de jour, it turned out to be very different. It’s not first person and there’s no immediate hero in sight. Plus Tess and the person who does turn out to be the hero don’t either instantly love each other or fight an attraction by pretending they don’t like each other. I was a bit stunned as the narrative flows on and months pass with no romance in sight. Yet I was enjoying watching Tess fit herself into her new life so much that none of this bothered me. In fact, I was tickled to be reading something different.

I also like that Tess isn’t in some dead end and boring job she hates. She’s actually a talented illustrator who is in demand and respected for her talents. And then there’s Ratty – Miles Arnott-Rattenbury – though one would never know it at first glance. The tattooed owner of a very successful garage dealing with vintage cars hides his posh background well. But then Ratty’s not posh in either attitude nor actions. He’s more a working class man whose father just happens to be a solicitor. The fact that you have the authorial guts to let time slide by without forcing sparks or attraction between Ratty and Tess delights me. And there’s no sudden about face at the end of the book with Ratty being elevated in status. No long lost Duke nonsense at all. Ratty is as he is and stays that way.

I mentioned in my review of Rosy Thornton’s book, “Crossed Wires,” that I like seeing a different country through a book. I like reading about petrol, bonnets, boots and the M5, village life, pubs and fetes, ticking things off lists, ringing people and wearing knickers. It’s nice to feel like I’ve actually traveled to a different place even if it’s just though the pages of a book.

Another good thing is that neither Tess nor Ratty are wholly likeable characters. Both of them do things which make me want to bash their heads. Ratty can be, as his mother warns Tess, very manipulative in getting his way and Tess tends to take off and flee when the going gets tough. This made some of the reading hard going but I can say that neither character bored me. Nor did I feel that this was a book I’d read a thousand times before.

I feel I need to talk a bit more about the above paragraph though. What is done to precipitate the romance does initially make me see red – as it does Tess. But I end up accepting it, as does Tess, because it gets her what she really wants and it shows how much Ratty wants a relationship with her. Plus I like that you don’t have Tess flounce off in a tiff as would happen in so many romance books.

Tess’s actions, when a past event threatens their romance, also initially makes sense given what her ex-fiance put her through. But the extent of it before she wises up and heads back to face the music put a damper on my enthusiasm for the book as a whole. She ends up way past a reasonable response and deep into selfish territory. What gets her back in my good graces is she does face what she’s done and she’s not let off lightly by those she hurt.

Good onya for writing compelling characters who are engaged in a complex relationship. While it doesn’t totally work for me, as I outlined above, I still found it fascinating and so different from the norm that I hope readers will be willing to sit back and go with the slower pace of this story to discover its nuances and charm.

Proviso: Smashwords is having a huge sale because it is International eBook Week (or something like that). Anyhoo, this book is 50% off right now which makes it all of $3.00.

→ Jayne
Previous article: REVIEW: Born to Be Wild by Christine Warren
Next Post: Spring 2010 Giveaway for Putnam and Riverhead