The YA dystopian subgenre is fast becoming glutted. It seems like so many titles fitting the category are coming out these days. But sometimes I wonder if that’s because they genuinely fall into that category or are just being placed there for marketing purposes. When I first heard of your novel, I was given the impression it was just another dystopian. Upon completing it, however, I realized it was less dystopian and more science fiction. 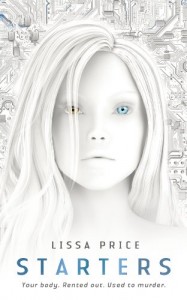 In the future, technology has made great advances. People can live until 200. You can leave your body and take over someone else’s while their consciousness “sleeps.” Unfortunately, not all technology has positive, or even neutral, uses.

At some point, wars took place all over the world. The one most relevant here were the Spore Wars. During this conflict, a biological agent was released in the U.S. that resulted in the deaths of everyone between the ages of 20 and 60. This led to society being split into two distinct groups: the Starters (people under the age of 20) and the Enders (people above the age of 60).

Life is difficult if you’re a Starter but it’s far worse if you’re an unclaimed minor. Callie, our heroine, is one such person. She and her younger brother have been living on the streets since their parents died during the Spore Wars. It means scrounging around for food and supplies while avoiding rival street gangs and the law enforcement agencies that make daily sweeps through the slums, rounding up kids to work in factories. In this world, Starters have become second-class citizens.

But as their situation grows dire, Callie becomes increasingly desperate. She eventually takes up an offer to rent out her body to wealthy Enders who want to re-experience the joys of being young again. Most of the time this means partying, clubbing, and athletics.

The money is good so Callie decides to accept the deal. Unfortunately, complications soon arise. Namely, the chip in her head that allows the “renting” to take place malfunctions and Callie finds herself in control of her body again. This should be a dream come true. Big house, servants, fast cars, and lots of money — what’s not to be excited about? Except the more time Callie spends pretending to be an Ender in a Starter’s body, the more she realizes that partying is the last thing on her Renter’s mind.

I think I liked the idea explored by this novel more than the novel itself, if that makes sense. The ethical dilemmas were what kept me turning the pages. There’s a huge gulf between the very rich and the very poor. It’s an echo of issues we’re seeing played out in current events. In the world of Starters, the Enders’ fear of the younger generations usurping their place in society too soon is what led to the relegation of the Starters to second class citizens.

It’s this opinion of Starters that gave rise to “renting.” Poor Starters see it as a quick easy way to earn money. Enders have to sign a contract that ensures their body be taken care of. Any damage results in heavy fines. And it’s expressly prohibited to have any sexual contact with Starters while inhabiting a Starter’s body. So no fears about coming back and discovering you’re pregnant. Plus, you get a makeover.

But how messed up is that? Does society really value youth so much that people would be willing to take over other people’s bodies just to get it back? The social commentary here is pretty evident. I appreciate that because it balances out the novel’s other implication: the young have no power and are convenient slave labor for the old. On the other hand, I can see why the latter would be a popular idea for the target audience.

For the novel itself, however, I’m of two minds. There are parts I really enjoyed. I loved the sections where Callie would “wake” up and find herself in control of her body again. Sometimes she finds herself lying on the floor of a nightclub. Other times she discovers she’s holding a gun.

The thriller aspects are the strongest parts of the plot. The sections where Callie tries to figure out what’s going on while she has control of her body are suspenseful. How long will she have control of her body this time? What has her renter done now? The plot enhances the fears we all have about losing control of our own bodies. So many things could be done to Callie’s body while she’s “asleep.” Given what her renter is doing, she could die or find herself awake in a prison cell.

By contrast, the romantic subplot bored me. It should have interested me since it was a complicated situation. Callie’s an unclaimed minor and Blake is a Senator’s son. She’s pretending to be an Ender renting a Starter’s body so the people who buy into this lie are disgusted by the relationship. Not to mention that it’s against the rules laid out in the contract. Blake thinks she’s a rich girl even though she’s anything but. Even to him, she’s also telling a lie. All the complications here should have kept me riveted.

Instead I was utterly bored because Blake was the blandest love interest ever. I suppose you could say there were plot-related reasons for this but for the majority of the novel, I failed to understand the attraction. But then in the final pages of the novel, there’s a reveal that makes everything before extremely creepy. I would have been on-board with that except Callie’s reaction to this revelation made no sense to me. [spoiler]If you discovered the guy you spent all this time with was in fact someone else inhabiting his body, would you actually want to spend more time with him? He has no memory of you and your memories of him are not actually of him. Isn’t that the least bit bizarre?[/spoiler]

On top of this, there’s a tacked on love triangle. Like many readers, I’m bored by love triangles. They’ve become formulaic and an easy way to add emotional conflict. But the one in Starters is so half-hearted, I couldn’t help but wonder what the point was.

Though the novel has its weak points, I found elements of it very compelling. I especially found some of the ideas really interesting and wished there’d been more attention given to them. Of course, I suppose that’s why this is a YA novel rather than an adult SF novel. All things considered, this is a B for me.

→ Jia
Previous article: Fan Fiction: A Personal Perspective
Next Post: REVIEW: Choose Me, Have Me, Want Me by Jo Leigh