Sometimes I think a reader connects to a writer in ways that can’t quite be articulated.  I’ve felt that way about your work for a while so I don’t know how reliable of a recommender of your books that I am.  What I connect with is the authenticity of the characters, the fresh take on people not only falling in love but figuring out how they fit together.

This is a story about opposites: vivacious Vivienne Jansen and taciturn, wounded soldier Ross Coltrane. 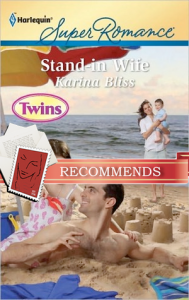 Vivienne Jansen is an identical twin but she and her sister, Merry, have never been close.  Merry has always fit in and Vivienne was just a bit too colorful for the rural New Zealand farming community where she grew up.  In fact, Vivienne hated being a twin.  She sought out her own group of friends and pursued very different activities than her sister.  In her family of three children, she was the least responsible and the most flighty.  Vivienne moved away and became a very well known costumer designer for movies.  Because she’s disconnected with her family, she rarely comes home.  But when Merry calls on her for help, Vivienne flies from New York to New Zealand.  Merry has broken her leg while interviewing for a job in a city an hour south and she is afraid that if Charlie finds out she’s thinking about moving away, he’ll sue for full custody.  Thus begins the twin swap.  Vivienne pretends to be Merry only the swap is only supposed to be for a few days.  Through a set of circumstances, Vivienne is forced to pretend to be Merry for much longer of a period of time, negotiating a reconciliation with Charlie and trying to handle the tasks of being a parent to two kids (the older daughter sussing out the fraud right away).

The only thing that matters in Ross Coltrane’s life is getting back into active service with the SAS, an elite branch of the Australian military and his brother Charlie.  Unintentionally, perhaps, Ross played a big role in Charlie and Merry’s breakup.  After Merry confessed that a man at her work had kissed her, Charlie went straight to Ross who asked him whether the two were in love in anymore and perhaps subtly encouraged Charlie to leave Merry.  You can’t blame Ross.  His father remarried a bitch of a woman who absolutely treated Ross like dirt.  Ross’ view of marriage is a dim one.

Throughout the story, Ross and Merry navigate Charlie and Merry’s problems, talking about what makes a marriage work.  They’ve picked sides, of course, but because they are outsiders, they aren’t as defensive as Charlie and Merry would be.  When Ross points out that Merry didn’t allow for any mistakes, Vivienne jumps to Merry’s defense but inwardly agrees. Vivienne, herself, has always felt that Merry has impossibly high standards.  When Vivienne says that Charlie stopped paying attention to Merry, Ross disagreed but also wondered if Charlie shouldn’t try to exert himself more.

As Vivienne and Ross take up the parts of a fueding married couple, the subtext is their mutual fear of commitment.  Ross, in particular, is driven to get revenge for the loss of two of his fellow SAS brothers who died when an IED  exploded under a Dumvee he was driving.

“How do you do it, Ross? How do you make peace with death?”

The same accident injured Ross’ leg to the point that no one but Ross believes he can ever achieve active duty status again.  Vivienne has always had a hankering for Ross but, in general, Vivienne doesn’t commit.  Primarily because no one has ever expected Vivienne to stick but the twin swap puts Vivienne through a fiery trial of responsibility and commitment.  There is a HEA in this book but it’s not a traditional one.  But it fit the characters.   Plus, these two talk to each other.  They argue.  They disagree.  The way in which they converse is proof to me that their problems won’t be brushed under the carpet.  One  will always call bullshit on the other.

Ross took off the whistle. “Tell Til I’m sorry. Take over. I thought I could put a lid on this, but I can’t. I can’t.”

“Don’t walk away,” she said. “Only you can fix this with Tilly.”

“I can’t even fix myself,” he said harshly.

Viv took a deep breath. “You know your pity party is getting really old.”

“Life’s chosen another path for you, so suck it up and quit blaming my brother and the unit for not letting you play out your revenge fantasies,” she said brutally. “Steve’s and Lee’s deaths were tragic, but using anger to fill the void left by their passing won’t solve anything. Deal with your grief, Ross.”

She had to dig her hands in the pockets of her sweatpants not to touch him. “You’re still a soldier,” she said crisply. “It’s only your mission that’s changed. Quit serving the Iceman’s ego and serve where you’re needed. And right now, that’s here.”

I genuinely enjoyed reading about Ross and Vivienne.  Vivienne was colorful and fun, but she had a big heart and was willing to make herself vulnerable time and again.  Ross was dedicated but he also had  a wicked and perverse sense of humor.   My biggest complaint is that I think there was a little too much going on in this short space.  Like Here Comes the Groom, I felt like the story could have used another 10,000 or so words to give us a little more private Ross and Vivienne time.   Still, maybe that is because I like the characters so much that I am loathe to let them go.  B

P.S. Harlequin, you have some of the most godawful titles, covers and blurbs in this line.  If there is ever a line that is SCREAMING for a makeover, it is this line.  It really needs some help.  Plus, I wouldn’t be adverse to a little more sexiness to the stories.  After all, these are all adults.