Note: This review contains major spoilers for Waking the Witch, the previous book in the series.

I’ve been a fan of yours ever since Bitten was first published. In the years to follow, urban fantasy exploded as a subgenre which was great for you because your Women of the Otherworld series found a marketing angle. And while I think the peak of the urban fantasy trend is behind us, your adult urban fantasy books are ones I still pick up, even after I’ve long grown weary of the subgenre. There’s just something about your characters that I love. 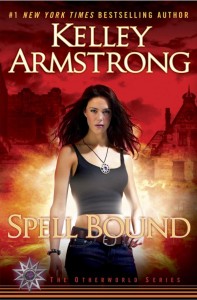 In Waking the Witch, we were introduced an adult Savannah Levine. Savannah’s been a staple of the books, having been introduced at the tender age of 12. We’ve literally seen her grow up during the series. But even though we’ve seen her get into scrapes and dangerous situations, the one thing we’ve never seen is her be tested.

After the events of Waking the Witch, Savannah has lost her powers. And as the daughter of a powerful witch and sorceror, her powers were nothing to scoff at either. In fact, you could say Savannah’s grown accustomed to having them. Without her magic, she literally doesn’t know what to do.

So now Savannah has to find out why her powers disappeared and how to get them back. This on top of witch hunters who want to kill her, a task now made easier by the fact that Savannah has essentially become a normal human being. Throw in an underground group of supernaturals who want to reveal their existence to the entire world, and she’s got a lot to handle.

Looking back on it, I think I liked Waking the Witch in spite of the weak plot because of the characters. Your character portrayals have always popped off the page. That’s a quality I like in my books. Spell Bound has a much better plot but having read it, I realize these three final Otherworld books need to be treated as a trilogy. A traditional fantasy trilogy to be exact. I don’t know why I didn’t recognize that immediately. Traditional fantasy is my bread and butter, but I guess I wasn’t expecting to see the classic structure brought over into urban fantasy. What do I mean by the fantasy trilogy structure? This: the first book introduces the situation; the second book bridges the conflict and builds it up; and the third book (theoretically) fights the big battle.

Knowing that Spell Bound is the penultimate book in the Otherworld series, with the next Savannah book being the finale, made everything clear. I finished Waking the Witch feeling that the conflict resolved with little impact. I now realize that’s not true. The conflict of Waking the Witch didn’t resolve with that oomph you expect because it led directly into this book. The small case Savannah pursued leads her to something bigger, something that could change their world forever.

On the other hand, knowing what I do now, Spell Bound did read like a set-up for the climax book. It suffers from “middle book” syndrome. It bridges the introduction to the finale. With everything that was brought together, I hope the finale lives up to expectations. I did feel like there was a lot going on, so I don’t know how you intend to wrap everything up in the next book. Of course, I always feel that way about fantasy trilogies so that’s not unique to Spell Bound.

This book is definitely not a good entry point into the series. There are a lot of cameos of characters from previous books. For some of them, prior knowledge is unnecessary but for others, it absolutely was. I had to jog my memory a couple times to remember who some of them were and their significance to the world and other characters.

As for Savannah, I really enjoyed her internal conflict. It’s true. She’s never been tested. So when she loses her powers, she loses sight of who she is. She’s used to being known as the daughter of that bad witch and the Cabal sorceror, used to being the young woman with the strong powers. Take that away, and what does she have? Toss in the fact that she has unresolved abandonment issues, and it’s a mess waiting to happen. But it is a mess that needs to be faced and resolved in order for her to evolve. I definitely like it when characters are forced to grow and change. Savannah does that here in a very human way that I appreciate.

The Savannah and Adam angle is both sweet and frustrating. On one hand, I know that it has to progress slowly. She’s been in love with him since she was 12 so there’s the awkwardness of those feelings changing from those of an immature crush to something more mature and deeper. Then there’s the age difference between them. Does Adam still see her as a child? Will he only ever see her in a platonic light because of it? These are the doubts that eat Savannah and keep her paralyzed about acting on her feelings. But never fear, romance readers: there is progress. It’s subtle. No overt declarations for these two, but we’ve moving in the right direction. I suppose something has to be saved for the finale.

A part of me does wonder if I’m missing some context because I haven’t read the young adult novels set in this world. There were sections where I wondered if something I’d just read was a reference to those books or if I was simply projecting. I’d be interested in hearing from people who’ve read both series. If I was missing context, I don’t think it hurt my understanding or enjoyment of the novel. That said, I did get the sense that I was missing some connections and that sort of thing tends to bug me as a reader. (I unfortunately have completionist tendencies. Even if I swear off a series, I still look for spoilers to see what happens.)

While certainly not the place to start the series, Spell Bound was a great improvement over the previous installment. It doesn’t stand alone, but none of the Savannah books do. I’m looking forward to seeing how you plan to conclude this long-running series. There’s a lot of threads to bring together. Hopefully, it’ll be worth the wait. As for this book, it’s a B for me. Your characters are still magical for me, even after all these years.

→ Jia
Previous article: REVIEW: The Man She Loves to Hate by Kelly Hunter
Next Post: REVIEW: One Good Reason by Sarah Mayberry