Last time I checked, it was an axiom in the romance publishing world that unusual locations don’t sell (I do not exactly have my finger on the pulse of the industry so this may have changed, but I doubt it). Like most axioms of this sort, if they are true at all, there is a corollary: there exists a (perhaps small) group of romance readers who will give a book a try solely due to an unusual setting. I’m one of those readers. I’m wary of new authors the way a picky 7-year-old is wary of unfamiliar green vegetables, but the minute I saw “Salzburg, 1804” on the first page of Song of Seduction, I was determined to give the book a try. What I found was a very mixed bag – there were aspects of this book I absolutely loved, but there were also some significant problems for me. 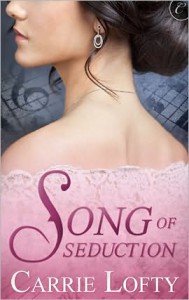 The heroine, Mathilda Heidel, is a recent widow who resides with a friend, Ingrid, and Ingrid’s diplomat husband. One night at a party she encounters Arie De Voss, a Dutch-born musician and composer of some renown. Mathilda is captivated – as a musician herself (she is a violinist), she has long admired Arie from afar. However, their first encounter does not go well; Arie is rather lacking in the social graces, and he manages to put Mathilda off with his awkward abruptness. Nonetheless, she impulsively asks if he will take her on as a student. Arie, intrigued by Mathilda and perpetually in need of money, agrees.

Mathilda’s decision to return to the violin after not playing for years is a difficult one for her. Mathilda, as Arie discovers at their first lesson (after insulting her by suggesting that she is really there for an assignation), is a musical savant, able to play a piece perfectly by ear after hearing it only once. Her talent has been more of a torment than a boon in the past – her music masters regarded her with distaste, as if she were a freak, or even worse, with envy. Arie is the first person in a long time to appreciate her talent and demand that she nurture it; that keeps Mathilda coming back to him even though their relationship is fraught with tension and Arie continues to behave boorishly. Mathilda’s mixed feelings about Arie increase when he forces her to perform in front of a crowded music-hall audience, revealing her secret to the local society.

Arie has his own secret, one that torments him. I’ll spoiler-bar this, though it’s revealed early in the book (it’s referenced in the book’s blurb, as well):

[spoiler]Arie gained fame with a brilliant symphony called Love and Freedom, but he did not actually write it; it was written by his aged mentor and Arie appropriated it after the man died.[/spoiler]

Arie’s secret intrigued me because I did honestly find his behavior shameful; it made him less likable but at the same time it lent him an appealing humanity. Romance hero flaws are usually pretty rote, and often not really portrayed as flaws at all: stubbornness, jealousy, distrust – they are either secretly virtues or the result of old hurts that the heroine is able to magically heal. Arie is allowed to be selfish, craven and greedy. He is redeemed somewhat by what he suffers for it – he is desperate to write a symphony that will prove that he is worthy of the accolades he receives but does not feel he deserves.

Mathilda has her own complicated backstory, one that explains her desire for respectable anonymity. Her parents’ marriage was a scandal than ended in tragedy, the husband she married for security was murdered and her unique gift has left her feeling like a freakish outcast. Both of the characters have significant obstacles to overcome before they are ready for happiness, and that’s the way I prefer it.

There were so many little details that I liked – for one, the hero’s believable and necessary quest for redemption. Also, the fact that he, Dutch by birth, sounds vaguely foreign at times talking to the heroine (in German); it lends his speech an interesting abrupt quality:

He regarded her with the disconcerting physical interest he had revealed at the Venners' ball. "Why are you here, really? Do you wish some intimacy with me?"

With so much to like about this book, I wish that I could recommend it unreservedly. Unfortunately, the writing overall was a pretty significant roadblock. I’m rather picky about prose, and I found Song of Seduction way overwritten. Occasionally, certain sentences and passages really shone:

The entire two sentences are very evocative but it’s the detail of the “yellow-and-pink stuccoed facade” that really brought the setting alive for me – I’ve mentioned before that I’m not a hugely visual reader, so I’m always impressed by writing that does conjure a mental picture.

But I quickly grew weary of the surfeit of adjectives and the lack of simplicity in the prose. Take this passage:

Limiting his amorous encounters to female admirers who aggressively sought his attentions, he had never pursued a woman. He restricted his use of sexual play to situations in which his partner had already decided the outcome. Now, when his fascination approached a dire crest, an absolute lack of meaningful experiences left him inept and stranded in dark ignorance. He longed for any meager flame to guide his way.

There’s not any one thing wrong here (well, maybe “his fascination approached a dire crest”), but the whole book is written like this. I liken it to overseasoned or overly rich food – it’s something that tastes good in small doses but starts to pall quickly. It’s unfortunate because it really did interfere with my enjoyment of the unique characters and situations. I actually like the sentiment in the passage – the whole “he never pursued a woman” is pretty standard for romance heroes, but I love the more honest conclusion that you don’t usually find in a romance: Arie has no idea how to seduce. I just wish it could’ve been said in a simpler way.

Other than that, Song of Seduction really had very few negatives for me. I wish the heroine’s background had been explored a bit more – her father was a Jewish musician and it’s so rare to find a heroine with Jewish roots (even if she would not have been considered Jewish since her mother wasn’t) that I would’ve been interested to know more explicitly how it affected her (given the setting) and whether she felt any connection to the faith. The hero’s father had been hanged for treason when he was just a child, due to some military conflict that I didn’t understand that well. The reader is eventually given a sense of how this affects Arie and plays a part in the choices he makes, but it came rather later in the book than I would’ve liked. That sort of thing is probably just personal preference – I don’t mind a character’s history and motives unfolding throughout the story but if there are key details that explain their personality a bit I prefer that they be revealed by, say, the halfway point.

I was a little confused about the murder of Mathilda’s husband – I think I assumed that there would be some sort of story behind that, and while I appreciate very much that the book didn’t turn into some suspense/murder mystery/heroine in peril story as so many romances seem to, at the same time it seemed like an odd choice to have him die that way and not have any explanation of how or why (that I can recall). Perhaps this is part of a series and this will come up again in another book. There is a background character, Oliver, who seems like hero material for a future book.

I found echoes of a couple of my old favorites in Song of Seduction – it reminded me vaguely of Megan Chance’s The Portrait and Judy Cuevas’ Bliss. Both books featured troubled genius heroes and heroines who were either student or muse or both to those heroes (Mathilda is both to Arie). I can’t help but think that readers who are less picky about prose might love this book – as it is, I will give it a very qualified B.

| Books on Board | nook | Carina Press