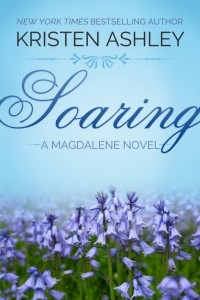 I pre-ordered Soaring and was a little bummed I had to wait a few days before I could dive in once it downloaded to my reader.  Your books have become a kind of comfort read for me.  I’ve a fair idea of what I’m going to get and I know I will be entertained.  Of course, what makes it different than a true comfort read is that I haven’t read the book before – and as I’m not a big re-reader this is a perfect hybrid for me.

There are a lot of similarities to your work, but I find it a feature, not a bug. I know I am going to get some convoluted sentence structure which, on occasion, I may have to read more than once to understand.  I also know I’m going to get wonderful female friendships, a large and loving family (either born or made) and a sense of community.  Much to my surprise, it turns out those things are big attractors for me.    Add to that, alpha heroes who are devoted to their ladies and to their family and, very often,  to their community, and laugh out loud funny humour, well it’s not a wonder I not only pre-order your books but I actually read them too. (These days making it to my TBR is but one step in a process which most often doesn’t result in the book ever being opened.)

Soaring was an enjoyable read and had all my favourite things – the female friendships, the big loving family which only got bigger over the course of the book, the humour and the sparkle between Amelia, the heroine, and Mickey, the hero.  I didn’t like it quite as much as The Will – I think Jake and Josie had a better conflict and Jake had his head up his ass less than Mickey – but it was still a lot of fun.  For those who enjoy Kristen Ashley books, it’s a solid addition to her list.

Having recently read/listened to the first three Rock Chick novels, I’ve come to realise that one of the things I love best about your books is that they are so inclusive.  More people are added to the family and the table gets bigger. No-one loses their seat – the family just expands and everyone is welcome.  I love the magnanimousness of it.  In Soaring, when Amelia first moves to Magdalene, she is alone.  She is estranged from her two children because when her marriage broke down she lost the plot and became very difficult to be around.  In Magdalene, she not only finds herself, she also reconnects with her children, makes fast friends with Josie and Alyssa (from The Will), renews her existing friendship with her previous BFF, Robyn, and meets Mickey and finds love and more family with him and his two children.  While I don’t hold with the idea that a woman has to be married with children to achieve happiness (and I don’t think your books argue for that necessarily), I do love the portrayal of the HEA as being more than just finding romantic love.  There is a holistic feel to your stories which make the HEA payoff at the end so much more fun for me.

The main conflict between Amy (aka Amelia) and Mickey is her wealth.  She comes from money on both sides of the family and has THREE trust funds which mean she never has to work for cash and can buy pretty much anything she wants.   Mickey is a self made man and works very hard for a boss he doesn’t like much in order to volunteer as a firefighter for Magdalene.  He loves his town and his community and he has always wanted to be a firefighter.  (Magdalene can’t afford to pay anyone in the fire department a wage, except for a part time salary for the Chief.) The times Mickey walked on the wrong side of the dick line were when he was stressing about Amy having more money than him and that he couldn’t give her everything she needed because of it.  The notion was a little too retro (and not in the good way) for me.  I’d have preferred it, I think, if Mickey didn’t come from money either.  As it was, the Donovan family wealth made the conflict harder for me to buy into.

In The Will, Jake Spear isn’t rich and he works very hard to support his family.  Josie is very wealthy (mostly from her inheritance from her Gran, but she wasn’t hurting for cash before then) and I don’t recall there being too many fights between them about finances.  Yes, Jake (*mild spoiler alert*) thought she was out of his league but wealth was only a part of that.  Perhaps I’m misremembering but it didn’t feel like it was as big a deal for them to negotiate as it was for Amy and Mickey.

Apart from the money thing, there wasn’t much keeping Amy and Mickey apart.  They each had family stuff to deal with and, in Mickey’s case, work stuff, but none of those things were a huge barrier to the relationship.  While I like a low conflict story every now and then, my favourites of your books tend to be where the stakes are higher.

Again I could be misremembering, but it seemed to me there was a bit of snark between Josie and Alyssa I hadn’t picked up in the previous book and it surprised me a little.  Josie didn’t come across to me as quite so judgemental in her own story.

Amy is 47 and Mickey is 48 and I loved this. Being *cough* around that age *cough* myself, I find myself extraordinarily pleased that there are stories with protagonists who are my vintage and who aren’t portrayed as old. (Because I’m not old dammit.)  I don’t think Soaring is inaccessible for a younger-than-mid-40s reader either.

Boston Stone turns up again and plays the one note villain – he doesn’t have much to do in the novel and he’s fortunately not in it much.  On the other hand, I liked where the story went with Rhiannon, Mickey’s ex-wife.  Amy’s ex, Conrad, is a complete dick but he’s mostly a good dad and I liked how that became apparent in the book.  Unlike Boston Stone, Conrad had some nuance to him (mainly at the end of the story, it has to be said).

I thought there were a few loose ends – which, considering the size of the epilogue (not a complaint) is surprising. I had a couple of questions about Mickey’s future career and his firefighting role and what happened with those. This is mildly spoilerish so I will put it under a tag

I wondered why Mickey didn’t just volunteer full time with the fire department once his money issues had been sorted out. Also, did he actually become Chief?

Even though Mickey occasionally annoyed me with his forays into “my dick must be the biggest dick” posturing, he also charmed me with his devotion to his children and to Amy and he earned many points from me for this:

“You’re not ready, Amy, then you decide the time. But you’re eventually gonna have to share how he got your kids from you, baby.”

I felt every inch of me grow solid and Mickey didn’t miss it, couldn’t, and his arms grew snug around me.

He also dipped his head so his jaw was no longer resting against the side of my hair and he said in my ear , “If this is not the time, it’s not. But I’ll say now, this is what this feels like it might be, you gotta learn there’s no safer place than in my arms and when you’re here, Amy,” his arms gave me a squeeze, “you can give me anything.”

Also, Amy pushed back and didn’t just let Mickey walk all over her (not that he tried incessantly or anything) and he didn’t always get his way.  This is a thing I liked very much.  I don’t mind an alpha hero but if the heroine is a doormat, I invariably end up hating the both of them.  An alpha hero with a woman who stands her ground and pushes back is far more interesting and loads of fun for me.

While I liked The Will better than Soaring, this book still hit the spot for me and I found it easy to sink into and enjoy. It delivered for me exactly what I was expecting and after three duds in a row immediately prior, I can’t even tell you how much I appreciated that.

→ Kaetrin
Previous article: REVIEW: By the Sword by Alison Stuart
Next Post: A letter to the DA Readership