When reading your romantic suspense books, one thing I can count on is that the underlying reason for the suspense plot won’t be too far out in Never Never land. Perhaps there might be a slight lift of my eyebrow or the beginnings of a question on my face but overall, the basis for the whole sound and light show generally makes sense and might happen in real life. And that is an accomplishment.

“On a sweltering summer afternoon, Sophie Barrett walks into a nightmare. A sniper has opened fire on a college campus. When the carnage is over, three people – plus the shooter – are dead and dozens more are injured. Sophie escapes virtually unscathed. Yet as details emerge from the investigations, she becomes convinced that this wasn’t the random, senseless act it appeared to be. No one wants to believe her – not the cops, not her colleagues at the Delphi Center crime lab, and definitely not Jonah Macon, the homicide detective who has already saved her life once.

Jonah has all kinds of reasons for hoping Sophie is mistaken. Involving himself with a key witness could derail an already messy investigation, not to mention jeopardize his career. But Sophie is as determined and fearless as she is sexy. If he can’t resist her, at least he can swear to protect her. Because if Sophie is right, she has made herself the target of a killer without a conscience. And the real terror is only just beginning….” 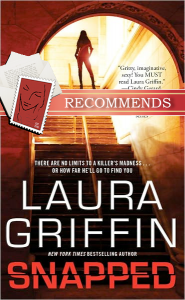 Shootouts at college campuses are, unfortunately, not new. When I read your letter that came with the arc, the personal inspiration for this novel chilled me. But turned sideways a little, you’ve made it into the basis for a suspenseful book. We’ve got the background of the Whitman sniper + teenage hackers + something already being done in the everyday world – though maybe not on people yet + greed + a ballooning house mortgage. Yep, events that have and are happening.

The attraction between Jonah and Sophie has been smoldering for months which keeps the romance from seeming too quick for me. They are physically and sexually attracted to each other but both keep a lid on it except when Sophie wants to manipulate Jonah into something – then she pulls out her sexiness and red bra. Plus she’s good at directing conversation where she wants it to go. Okay, it’s blatant sexism but it’s her tried and true weapon to get men to do what she wants. Still, Jonah knows that the badge will get you tail and tail will get the badge if an officer doesn’t watch his ass so he tries to keep things at arms length and is successful for a long time.

And while Jonah and Sophie admire each other’s physique, they also admire the person behind that hot bod. Sophie knows Jonah is a good, steady, thorough cop who won’t let go of something until he understands it all and has all the pieces. When she tells him what she saw, he does follow up on it even if he doesn’t push it to all his fellow officers. He balances what she thinks she saw with evidence and doesn’t just blow her off. Jonah admires how Sophie pulled herself together after the terrifying events in “Unforgiveable” and how she’s attempting to move up in the job world. In other words, it’s not just lust at work here.

The sex, when it finally arrives, is hot and flaming. And only one time was an “inappropriately timed” sexual encounter.

Sophie’s earlier brush with death has affected her as does this one too. Sharp sounds, like the bullets that cracked all around her on campus, make her jump now and anything that reminds her of being handcuffed or stuffed in a trunk set her off. She also isn’t afraid to tell Jonah what she suspects even though she doesn’t get immediate approbation for it. She sticks to her guns and even gooses Jonah with the TV interview. However she then lowers her IQ, IMO, by running several times and doing other things that make me think WTF? I’m thinking, just paint a bulls eye on your forehead lady and get it over with. Jonah is furious at her and I am too. Sorry but no amount of splaining will get me to see this as anything but silly.

“Snapped” has lots of secondary characters. Some are from previous books, though here they serve a purpose in this story and aren’t just there to show how damn happy those characters are now, and some new to this world. I always have fun guessing who might be teamed up with whom in a future book. Allison is cool and I love her “good cop/bad cop” routine – out of sight of the hidden cameras.

Another thing I enjoy in this series is the contrast of the idealized crime fighting done in the Delphi Center vs the cash and time strapped real world of the SMPD. Sophie’s realization that 24/7 witness protection is only for the movies and TV shows is a black humor reality check.

One of the highlights of your books for me is always the final, climactic scene when the evil is finally subdued. It doesn’t disappoint me here either. Call me a geek but I love all the sniper info that each person uses and how Sophie is ready to take out anyone coming after her.

The writing is compelling, the characters interest me even with their flaws, nothing about the basic plot seems too made up or eye rolling, and the tension is palpable when the whole ball of wax unravels. Yes, I know that last bit makes no sense. If not for Sophie doing a runner when she shouldn’t my grade would be higher but “Snapped” still gets a B from me.