The city of Leiodare is unlike any other in the post-climate change United States. Within its boundaries, birds are outlawed and what was once a crater in Appalachia is now a tropical, glittering metropolis where Anna Armour is waiting. An artist by passion and a factory worker by trade, Anna is a woman of special gifts. She has chosen this beautiful, traumatized city to wait for the woman she’s lost, the one she believes can save her from her troubled past and uncertain future. When one night Anna creates life out of thin air and desperation, no one is prepared for what comes next-not Lucine, a smooth talking soothsayer with plans for the city; Lucine’s brother Eugenio who has designs of his own; Seife, a star performer in the Leiodaran cosmos; or Rory, a forefather of the city who’s lived through outbreak, heartbreak, and scandal. Told through their interlocking stories, Smoketown delves into the invisible connections that rival magic, and the cost of redemption.

This book is published by Blind Eye Books, which alone was sufficient recommendation for me to start reading it. I think of it as a fantasy with the elements of ff romance. If you are looking for explicit ff romance, look elsewhere, but if you have read other books by this publisher, you know that they do not usually publish the stories with explicit sex in it, be it ff or mm, so it should not come as a surprise. 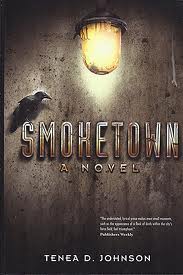 The blurb tells us that Anna is hoping to be reunited with the woman she loved, they are apart for the vast majority of the story and in fact we do not see Anna’s beloved anywhere but in her memories for the most of the story. I think the book shows Anna’s longing for her very well, but I do not feel like we got to know that woman well at all, so in the end  I actually was not that satisfied by the romantic angle, it is probably because I did not see them together long enough to feel romantic chemistry between them, but again if they were together before that time comes in the story, the story would have been completely different. I am trying to evaluate the book which was written, not the book I wanted it to be and for this story them being apart worked for the plot, but not for my emotions if that makes sense. I actually liked Anna’s chemistry with another character a lot.
If I think about this story as a fantasy with romantic elements however, everything worked much better for me. I guess the reason why I struggled initially with lack of romance is because Anna’s love so clearly drives her actions, but the object of her love is not there. Anna also has powers which I actually do not remember seeing in fantasy for quite some time, I would say her powers have a mythological basis, but I am not going to tell you what they are because it would be spoilerish. I  really like how blurb describes her powers – complete truth, but not 100% openness.
“Anna focused past the image of herself and onto the city. Already the night looked lighter, as if dawn were a short nap away and here she sat, a crime on her lap and unleashed power in her hands”

The world building is fascinating. I was immersed in the city of Leodaire and what it and its people were going through almost from the beginning. The city of Leodaire outlawed birds because of something that happened in the recent history of the city. The writer took an event that could and did happen in reality and more than once and took the consequences in the interesting direction. Mythology, magic, public health issues are all mixed together in this story and I really liked the result.
There are not that many characters in this book, who played important part in the story – most of them are named in the blurb, if you do not count the whole city of Leodaire as a character, and while initially it seems that they have no relation to each other, very slowly we see that they are connected to each other and city of Leodaire. I loved that the author was revealing the connection slowly and that it all made sense, it did not feel forced at all.

I wanted to talk about the other characters some more. I wanted to talk about how exactly Eugenio and Lucine met, and how their skills end up helping the city. I wanted to talk about Rory’s pain, and him doing the right thing at the end, but I realized that the actual talk about each of those characters would actually end up being a pretty big spoiler and I decided not to do that.
The characters each had not exactly a secret, but maybe a small mystery behind them, which are  first hinted at and then revealed in each individual’s “song” which is played in the main symphony. I say “song” not because every character in the book was singing, but because at time the writing felt very musical and very passionate to me.
“Foreign words that she and Peru had learned together, virtus that they had completed, other people’s dreams and nightmares upon which they’d spent their youth and bankrolled their adventures bubbled up from her despair and popped behind her eyes in brilliant flashes of color, as if she had a migraine unrivaled by any in her past”.
I truly did feel that city of Leodaire was a living breathing thing in this book; city which was still hurting from the traumatic event of its past and which finally started healing at the end of the book.
I really loved how the hope and darkness are both present in this story and that hope eventually prevails.