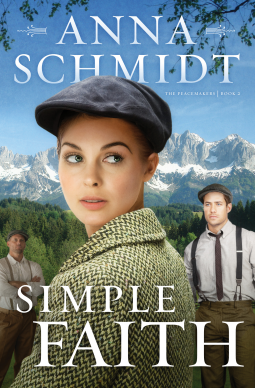 After losing her beloved husband and daughter and surviving Hitler’s Sobibor death camp, Quaker widow Anja Steinberg dedicates her life to helping others and keeping her son safe. As a member of the resistance, she helps displaced Allied airmen get back to their units in England. The journey is rigorous and filled with danger and there is no time for romance. Then American Peter Trent parachutes into her life. She must face facts—her heart did not die with her late husband and true love could be hers again. But will a romance hurt Peter’s chance of escape from the Nazis—and endanger her life as well?

I keep an eye out for your books ever since I discovered you through your Harlequin Historical Love Inspired novels. Quite by chance I happened to have watched a documentary a few months ago that detailed the story of a former American fighter pilot who was shot down during WWII and who by chance and luck was kept from capture for several months while he was sent along the Comet line in Belgium – one of the escape routes used to send Allied airmen through Belgium, France and Spain to return to Britain. When I saw the blurb, I knew I had to read this book.

The action gets going immediately as Peter Trent bails out of his crippled plane then watches as it slams into the ground and explodes. He’s concerned about which other crewmen might have got out in time but also with the fact that he’s been shot in the leg and the fireball of the crash will lead the Germans straight to the site. Desperately trying to remember his escape and evasion tactics while waiting to pull the ripcord of his chute, he calculates his odds and they don’t look good.

Luck is with him and the farm family first hides then takes him in. Anja arrives while the Germans are still searching the grounds of her grandparents farm and joins in the deception that must be flawless for them all to avoid imprisonment, interrogation and death as the network tries to help Peter heal, keeps him concealed and then transports him south.

Anja’s instructions to Peter as she teaches him the ways the Germans will try and trip up people they suspect, the pass offs, couriers, safe houses and, at times, brazen methods the people of the Comet line use all tally with what I’ve seen and read about resistance groups. The constant fear under which they all live is palpable. The danger is everywhere and anyone but as they tell Peter when he asks, it is what they can do to try and win the war.

I was surprised but enthusiastic that the book went far beyond what I was expecting. The group starts in Brussels, escapes detection with an elaborate ruse in Paris, splits up to Bordeaux, winds up near Limoges where fate stretches the escape to the breaking point. And then, the mountains! And details of how the route worked beyond the Pyrenees that I didn’t know the specifics about wind up the third section of the book. It was informative, it was immediate and again capture and death lurked at every turn.

The plot unfolded in a way that makes sense that Anja and her son needed to travel along with and at some times parallel with Peter towards Spain. There is time for these two to get to know each other before the “I love you’s” and the marriage proposal was timely and actually necessary to the final escape. I also like the ending which hints at the work needed after the war and fits in with Anja’s Quaker determination to help with that.

The religious aspects of the book are shown to be central to Anja’s life and part and parcel of the work she does. She shows her beliefs to Peter by her actions and the way she lives rather than any preaching at him and by extension, at me. Another nice thing is that even some of the Germans are shown as people too with their own dreams, fears and hopes. No group of people is ever just black or white. American Peter also comes to realize how arrogant he initially appears and learns some lessons about following instead of always trying to lead.

Anja is a strong heroine as well as an intelligent one. Peter gets to see and appreciate the bravery of those who would risk their lives to save total strangers. He and Anja help others escape and find love as they form a new family and a spotlight is shown on the role of the Belgians during the war. It’s a win for me. B

→ Jayne
Previous article: 81. An Interview with Kati D from DearAuthor
Next Post: Daily Deals: Maeve Binchy, a Tartine cookbook, and a historical with conflicting reviews