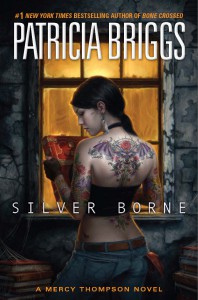 I’m pretty amazed and delighted at the consistency of your writing. Even though you have increased your writing schedule to include one more book release, it still seems the quality of your work has remained the same. As my fellow reviewer, Jayne, would say “Huzzah”.

I’ll confess that I found the book to be very romantic from the growth in the relationship between Adam and Mercy to the secondary storyline which I will try to keep from spoiling for other readers (particularly given our reader discussion yesterday).

For those unfamiliar with the series, Mercy is a coyote shapeshifter who has a natural immunity to magic. She has been courted by her neighbor, the Alpha werewolf of the Tri-Cities Pack. Mercy lives her with friend and former lover, Samuel, one of two sons of the Marrok who rules all North American werewolves. Samuel is a doctor and works at the local hospital. Samuel has struggled with loneliness for a long time. He had wanted Mercy primarily because she was a coyote and possibly could bear children, something female werewolves cannot do.

Mercy is still recovering from the events that occurred two books ago and her completed bond with Adam and his Pack is working erratically. Recently she’s been having confidence issues with Adam, her place in Adam’s life, her position in the Pack. Is she undermining Adam? Is she creating more danger for him and his Pack? She is acting strangely, in ways that baffle Adam and herself. Her internal voice or voices are driving her to try to both protect Adam and to rebuff him for failing to understand her puzzling behavior. (paranormal PMS?)

Worse, when Mercy needs Samuel to provide some insight into Pack behavior, Sam has gone off the deep end. Samuel’s wolf is exerting dominance over Samuel. His lone wolf status is coming to a head. No wolf can survive forever outside a Pack, not even Samuel. Samuel begins to spend a great deal of time in wolf form which complicates matters when a reality TV bounty hunter comes to town with werewolf name on the warrant and silver bullets in his guns. But it isn’t silver bullets that presents the most current danger for Mercy and her friends. It is a more sinister and powerful and unknown combatant who wants something Mercy supposedly owns.

Mercy’s connections with the humans becomes more tenuous when she realizes that her world just isn’t safe for the fragility of her non magical friends such as Gideon, the seventeen year old young man who works part-time for her, and Gideon’s family.

While the story initially seems episodic, the scenes serve as foreshadowing and preparation for the suspense and ultimate climactic portions at the end of the book. The tying up of seemingly loose plot ends was very nice although I still haven’t decided whether the suspense was resolved by a deux ex machina.

As I mentioned in the beginning of the review, this particular entry in the Mercy Thompson series had a very romantic overtone. There was a great deal of internal agnst Mercy displayed over her relationship with Adam, wanting to be what she presumes Adam wants while at the same time trying to preserve her own identity within the pack. Further, a secondary storyline appears for a popular character and that secondary storyline appeared weighted with romance overtones. Problematically, those romance overtones seem to be redundant of some in the past: wounded chick makes wounded mate whole again. To some extent both the Mercy series and the Alpha/Omega feature these tropes.

I really enjoyed this entry and while I thought that some of the ending seemed a little trite, it’s still one of my favorite urban fantasy crossover series. B