There is nothing like a 2100-mile road trip to give you the opportunity to listen to a really long book. At 26 hours, I think this is officially the longest audiobook I’ve completed. After several previous starts and stops (from last year!) I finally managed to crack the back of this novel. Liz McC and Miss Bates have both written about their experiences reading Shirley, and both are far more competent than I to talk about it as a novel. I approached it as a lover of 19thC literature but not a lover of Brontë. 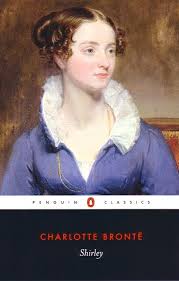 I really did need all those hours driving alone to stick to Shirley, because my goodness there is a lot of bloat in this thing. Or not bloat, maybe, but there are at least three books in this book. There is the nominal plot, about the mill and the changing economic conditions of the region. There are the relationships between young women, young and old women, and women and men. And then there are the many, many didactic passages (entire chapters, even) by the omniscient narrator, on everything from gender to nature to politics to religion (established, pagan, you name it).

I thought I was getting a book on riots and social change and suddenly William Blake (or is it William Wordsworth?) showed up. I am not a fan of William Blake (or Wordsworth). But then Blake/Wordsworth would be elbowed aside by Mary Wollstonecraft, which was better but still unbelievably didactic. And even worse, sometimes they emerged through dialogue. No one speaks this way! No one ever spoke this way! Certainly not barely-educated Yorkshire maidens.

This feels like a book written by a very angry woman, but an angry woman who in the end is writing two romantic storylines with HEAs. The romantic parts undercut the gender parts for me, because as miserable as Caroline is, and as independent and strong-willed as Shirley is, their emotions, thoughts, and actions are shaped so thoroughly by their love for specific men. I couldn’t help but think that Caroline would have had fewer emotional and physical crises if Robert had just had a bit more economic success from the outset and been able to act on his love for her. I’m not sure what Shirley’s point was supposed to be, as a character (readers, I warned you about my literary-analysis ignorance). She’s rich and independent and apparently highly motivated to be a good landowner, but then she’ll stop for pages and pages, falling into a trance and thinking about Adam and Eve, or just Eve. And then three-quarters of the way through the book we find out that she too is pining for a man.

It strikes me that this is the kind of story that makes people disdain the romance genre. The strength and complexity of the young female characters is completely undercut by their unfulfilled passions for their beloved objects. And the spinster women are rendered in such a way as to make me think that Brontë thinks their lives have been wasted. So what if society thinks ugly, good-works-directed women are to be pitied? A lot them them didn’t pity themselves (including in this book). Isn’t that what matters? I’m not putting this well, but something about the way women’s work was portrayed bothered me a lot.

After I finished it was clearer to me that Brontë was railing against the constraints women faced, but as I was reading her anger and motivations were overshadowed by what I felt were dismissive, one-sided portrayals. Of course that era stifled and constrained women, and that’s worth getting angry about. But those constraints don’t make Miss Ainley and Miss Hall (or even Hortense) pitiable to me. I felt the narrator sometimes elided that distinction.

I’m complaining, but I’m not at all sorry I’m read/listened to it, especially after the excellent conversation about the book and the Brontës more generally at my blog. After that discussion I feel as if I understand the tensions and contradictions of the novel much better. Bentinck’s narration is excellent, and there are some wonderful passages and scenes. Once I adjusted to the idea that I was reading a manuscript as much as a finished book in the modern-day sense, I found the digressions and meanderings easier to take (although the devoir section just about finished me off). It does reinforce my belief that a reader falls into either the Austen or Brontë camp. Not that you can’t like both, but if you do, you like them for very different things and you tend to prefer one over the other. Reading Shirley is like reading Sense and Sensibility with Sense removed and Sensibility doubled.

In the end, there wasn’t really much about riots or social change. Brontë seems to favor the millowners over the displaced workers; she feels for the latter in the abstract, but she doesn’t show much empathy for the individuals she writes, or render them as unique persons (with a couple of exceptions). The last third of the book seemed to concern itself primarily with the two romantic storylines, which was fine. Shirley’s romantic arc was both more interesting and more unsettling. Robert Moore became more sympathetic to the concerns of displaced rural people, but it happened almost entirely offstage. Still, it was good to see an integration of relationship issues and larger social issues. It was also interesting to read what is essentially a historical novel, since Bronte was writing about an earlier period than the one in which she lived. Some of the political and social issues felt more grounded in her era than the date in which the story was set, which gives the reader a doubled historical experience.

This is not an author I’m ever going to connect with emotionally or intuitively, I don’t think, but I value the insight into a personality and writing that is so different from my usual fare. And while the book is a big, unwieldy mess of a read, more people should give it a shot. It’s worth it. It seems strange to give a classic a review grade, but since that’s what we do here, it’s a Grade: B.