REVIEW: Shadows on the Moon by Zoe Marriott

I’m always on the lookout for books featuring nonwhite characters so when I stumbled across your new novel on NetGalley, I had to request it. I know my previous encounter with your work was so-so but the experience certainly wasn’t enough to turn me off to the possibility of giving you another try. I’m so very glad I did. 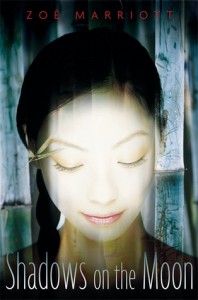 Shadows on the Moon tells the story of Suzume, the daughter of a noble family. When the book opens, she’s looking forward to celebrating her birthday without the oppressive presence of her mother, who’s currently away visiting a bereaved relative. Unfortunately, what was supposed to be a happy day turns to tragedy. Soldiers attack her family and everyone is killed.

Everyone except for Suzume, that is. (After all, if Suzume died, there’d be no story.) Suzume manages to survive and reunites with her mother, who arrives by the side of powerful lord Terayama who was also the best friend of Suzume’s father. Terayama takes in both Suzume and her mother and as perceptive readers can guess, soon her mother and Terayama marry.

Suzume throws all she has into forgetting what happened and becoming a perfect daughter and lady. That plan falls apart when she learns the truth: Terayama was responsible for the death of her beloved father and cousin. It’s something Suzume cannot forgive. And so she casts off her entire identity in order to seek revenge.

This was one of the more original retellings of Cinderella I’ve seen. I’m not even referring to the setting, which is a fantasy world loosely based on what I believe to be Heian era Japan. The interweaving of Suzume’s quest for revenge with her psychological trauma and burgeoning magical ability against the original Cinderella story was well done. I also found it interesting that the wicked stepmother and fairy godmother roles were genderflipped and assumed by male characters here.

I also thought it was refreshing that Suzume’s prince was not actually the Prince Charming character. In fact, the Prince Charming analogue is rather bland — something Suzume acknowledges, but she sees him as a means to an end rather than her one true love. Instead Suzume’s love interest was another prince entirely. It was great that he was not only nonwhite but also the African analogue of this setting. It’s still relatively rare to find interracial romances between nonwhite characters (versus the more common white/nonwhite couple), and I liked seeing that representation here.

Speaking of great, it was also nice to see a trans woman as a major supporting character, especially when she wasn’t portrayed as a freak. It’s still 50/50 these days when it comes to portrayals of transgendered characters. (And maybe I’m being generous with those odds.) While Akira is infamous, it has more to do with her past role as the lover of the previous Prince than her gender in and of itself. It was nice that Shadows on the Moon didn’t just focus on diversity in race but also queer diversity. That’s more inclusive.

I found Suzume’s trauma over the family massacre, as well as her guilt over surviving it, to be handled pretty well. As a reader, I felt how damaged she was and saw how it ultimately led to her cutting. And a warning to readers sensitive to depictions of cutting, there’s a lot of it, especially in the first parts of the novel where Suzume is the most freshly traumatized by her experience. I wouldn’t say it was portrayed in explicit detail but it’s definitely present and Suzume relies on it quite a bit.

I appreciated the effort to leave certain Japanese terms untranslated. Because it’s true; some things are lost in translation due to there being no English-language equivalent. For example, Japanese honorifics like -san or -chan. Translating these terms can be clunky and awkward so I favor leaving them as is. On the other hand, there can be such a thing as including too much. If there’s a direct English translation of a Japanese word, I see no reason to leave it in the original Japanese. For example, baka means idiot or stupid. There’s no reason why that can’t be translated. I realize it’s a fine line to walk. Some prefer more original Japanese language while others like none to be included at all.

Revenge stories are one of my favorite narratives so I stayed glued to the pages until the end. However, the more we approached the end, the messier the plot became — and I don’t mean in a good way. It seemed rushed and anticlimatic. It’s not that I thought Suzume’s ultimate revenge against Terayama to be inappropriate; I found it fitting, in fact. But the narrative tension lost some steam when a certain reveal took place right before the climax.

Retellings are fairly common, and Cinderella is often a popular choice. Despite this, I thought Shadows on the Moon brought something new to the table. The choice of setting, the diverse cast of characters, and the heroine’s personal trauma and determination to seek revenge no matter the cost made this a worthwhile read for me. B