REVIEW: Sex and the Single Fireman by Jennifer Bernard

For the record, the first two books didn’t really work for me but I picked this book because I wanted to read about the female firefighter. There were some moments of gentle humor and real hilarity and the romance was sweet. 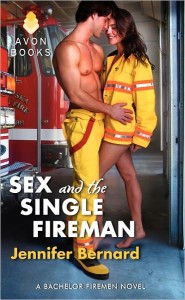 Sabina Jones is one of two female firefighters of the San Gabriel firehouse Station 1.  Or the Bachelor firehouse.  The Fire Chief is upset with all the publicity Station 1 has been receiving and feels like it is demeaning to the fire department.

This firehouse has become a national joke. I hear they call you the Bachelor Firemen of San Gabriel. You’ve even been on America’s Next Top Model. Girls infiltrate the premises so they can meet you.

Rick Roman had been brought in as the Battalion Chief and acting training officer for Station 1.

Rick Roman lost his wife in 9/11 who was also a firefighter.  He takes a job with the San Gabriel Fire Department so that his baseball mad son can play baseball year round.  Sabina and Rick enjoy a one night stand only to face each other at Station 1.  That Sabina was a firefighter isn’t the only thing that she is keeping from Roman.  Sabina is actually a famous former child actress, Taffy McGee, who left the movie world behind to pursue a firefighter career.

The conflict is that a) he is her superior and b) he has been brought in to reduce the media attention that surrounds the San Gabriel Firehouse. Worse, Sabina’s old manager wants to do a reunion show which Sabina resists.  But the manager is a manipulative SOB and leaks the information that Sabina is Taffy McGee.  Sabina has to deal with her inappropriate attraction toward Roman (Under her San Gabriel FD T-­shirt, her nipples pushed against her sports bra. He’d seen her naked from the waist up. Oh God. The new training officer knew exactly what her nipples looked like. He knew the sounds she made when she got turned on.), the media attention, and her co workers fascination and disappointment she didn’t share the information earlier.  Oh and that awful B movie she made right before she stopped acting altogether.

I totally dug Sabina whose transformation from child actress who hated the life forced upon her by her mother to firefighter was completely believable. She was competent and the men in her Station respected her.  She gave as good as she got from Roman.

The guys in Station 1 were entertaining – a mix of bravado, vulnerability, and friendship.  Sabina’s best friend is Vader, a big, burly guy who confides in Sabina about his relationship problems.

The one discordant note was the running gag about homophobia in the book.Vader is dating a girl who thinks he is homophobic because he got angry when a gay guy hit on him. The girl has a gay brother.  Vader wants Sabina to vouch for him, which she does, but Sabina also tries to help Vader by taking him to a gay bar.  When the two are there he starts kissing her against her will because he’s scared of all the guys hitting on him. In another scene, Roman’s son tells his father that he beat up another guy who said the father was gay.

I wished that there had been a better discussion of homophobia in the book since the issue was raised.  Being called gay is not the worse thing if you are a man. Being called a rapist or a pedophile might be, but not being gay.  I wish that the son of the hero would have not beat up some kid for calling his father gay because there is nothing wrong with being called gay. That is not a slur (or it shouldn’t be).  That’s the message that Roman should have conveyed to his son and it wasn’t.

I believe the book was trying to make a point that being gay isn’t something to be ashamed of and that the steroid using firefighter who was afraid his own masculinity was being challenged is something of a mockery, but I do think it could have been handled better.

Roman’s plays the role of a jealous beta. It’s hard to explain. He has these neaderthal thoughts but knows better than to voice them.  His thoughts run to the primitive, but his manages to rein them in to act like a  human being:

Sabina’s outgoing message answered the call. Her husky voice told him, “You’ve reached my cell. I’ll get back to you. Eventually.”

Eventually. Not good enough. Savagely, he ended the call without leaving a message. What could he say? If Todd Dane even thinks of asking you out, I’ll beat his ass into the outfield and back again. You come here where you belong. In my bed. I’ll let you out when I’m good and ready.

God, he was a primitive beast of a man. Sabina was an independent, intelligent woman who wouldn’t appreciate playing prey to his hunter. Finesse, Roman, Finesse.

There is also the scene where Roman is fantasizing about Sabina but then remembers that she is in a cast so readjusts his fantasies to take into account her immobility. This scene struck me not only as realistic but humorous.  Roman’s character arc was fairly predictable.  You can guess in the third or so chapter how the workplace conflict will be resolved.  Still, I had a lot of fun visiting with Roman and Sabina and the crew at Station 1.  B