When I saw your book featured in the upcoming releases at Netgalley.com, I was intrigued. Although the Napoleonic War is pretty heavily mined territory for historical romance novelists, the prospect of a cross-class romance appealed to me, and I’m always on the lookout for new authors.   While the story starts out much the way many Regency-set historicals do, it is far from a cookie-cutter plot, and as the story develops it comes very much into its own. 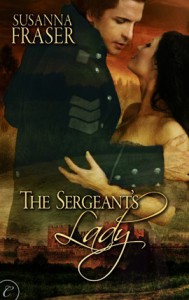 Anna Arrington is the niece of an Earl, the sister of a Viscount, and a considerable heiress in her own right. She is also unhappily married to Captain Sebastian Arrington and following the drum as he serves in Wellington’s Spanish Campaign.   Anna meets Sergeant Will Atkins, an innkeeper’s son who serves in the 95th Rifles, when she assists him in a difficult childbirth in camp.   Will and Anna are immediately drawn to one another, but even after she is widowed, their differences in rank and background, both in the army and in general society, preclude them from pursuing a relationship.   When they find themselves alone after escaping from French captivity, they give in to their feelings on the journey back to British lines, and they secretly continue their seemingly doomed romance until Anna returns to England.   In the second half of the book, Will continues to serve in Spain, while Anna tries to reestablish a life at home and faces unexpected events.   When Will is invalided out of the army after the Battle of Badajoz, he and Anna are finally both in England, but the social differences that kept them from openly declaring their feelings in the army loom even larger.

I admit that my heart sank during the first chapter, because the Spanish woman giving birth was named Juana. As I’m sure you are well aware, there was a real Juana, married to an officer in the 95th, and her romance was fictionalized in Georgette Heyer’s The Spanish Bride.   Perhaps you meant the name as an homage to both Juana Smith and to Heyer, but it pulled me out of the story. Luckily for me, you quickly established a very different story with characters with unique and well-drawn attributes.   The narrative arc is unusual for a romance. The hero and heroine realize their feelings for each other quickly, and they communicate them.   The conflicts that keep them apart are serious and authentic to the period, and I was genuinely unsure how you were going to bring them together for an HEA. That is no small feat for a romance novel.   In addition, the scenes of army life and the Peninsular context are very well done and reflect what we know from scholarly research and the historical materials of the period rather than romance conventions and shortcuts.

Anna is an interesting heroine. She is beautiful, rich, and vivacious, but you show us how those attributes have   brought her grief as well as advantage. I didn’t find her easy to warm up to, but I admired and respected her. Will, on the other hand, won me over completely. His sense of honor and his fight to retain that honor in the face of temptation were well realized.   And they are a wonderful match for each other. The scenes where they realize their own feelings, discover that the other reciprocates those feelings, and then act on them, are incredibly romantic.   Their conversations are delightful,   and their internal monologues are illuminating without going on and on.

Once Will and Anna are separated, however, the book shifts gears, and not altogether for the better. They really live in separate worlds at that point, and even if they are thinking about each other, there is no interaction, such as through letters, for the reader to latch on to. This break makes complete sense in the context of the story, and it gives the plot suspense (How will they get back together? Can they really make it work?). But it means that the romantic elements have to be sustained through things that happen to each other separately. And the things that happen to them are frequently depressing or stressful, so that takes us further from the romance. Paradoxically, I think that because you did such a good job with the romance in the first part of the book, I missed those scenes more in the second half. When Will and Anna finally get back together in England, the scenes between them felt all too short.   That said, the way you found to bring them together was ingenious, especially since it incorporated a part of Anna’s background and interests which you had presented much earlier in the book. And it felt historically appropriate as well.

I had a hard time giving this book a grade, even more than I usually do. It is a terrific debut novel, and I will definitely watch for future novels and stories by you. The sections that focused on Will and Anna together were enormously satisfying in terms of the romance. But I hesitate to recommend this unreservedly to readers who want the romance to be the primary focus of the book; even though the events that occur when Will and Anna are apart are influenced by their relationship, many readers will find those parts less satisfying. With that caveat, I can definitely recommend it to fans of historical fiction and to readers of historical romance who enjoy Peninsular-set English historicals and would like something a little different.   B