REVIEW: SEALed With a Kiss by Jill Monroe

One thing that I often find lacking in romances is seeing the actual courtship, particularly if you read paranormal romances with soulmate stories. I think that is why I like the friends to lovers trope or the marriage of convenience trope because we get to see the two characters navigate from viewing each other in one light to awakening to feelings that weren’t there before. SEALed with a Kiss is neither a friends to lovers trope or a marriage of convenience, but I really felt like I got to see two characters actually fall for each other and I believed, at the end of the story, that they not only belonged together but that their end would indeed be happy. 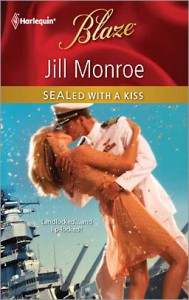 Rachel Sutherland is one half of the Sutherland sisters. It was her idea to rescue Sutherlands, a bed and breakfast that had been in her family for several generations. Now that Sutherland’s has been saved and is flourishing in the San Diego region, Rachel feels anxious and unsure of herself. Her feeling of discontent is heightened when Hailey, Rachel’s sister, prepares to welcome home Hailey’s husband after a six month deployment. Rachel has enjoyed their sisterly solitude but recognizes that she likely won’t see Hailey emerge from the inn for at least a week. Hailey convinces Rachel to come down to the pier to welcome home Riley, a fellow SEAL and best friend of Hailey’s husband, who won’t have anyone to great him.

Rachel gives a token protest but given that she’s been attracted to Riley ever since Hailey and Nate hooked up (SEALed and DELIVERED, in case readers were wondering), she ends up on the pier with a box of cookies.

Riley Wilkes tells himself that he doesn’t care that he doesn’t have someone to greet him; that he isn’t jealous of Nate’s new marriage to Hailey; and that he’s enjoying the neverending smorgasbord of women who throw themselves at Navy SEALs. Seeing Rachel, someone that he has secretly lusted after ever since Hailey and Nate hooked up, waiting for him brings out feelings he’s tried to deny.

Rachel wasn’t here waiting on some other guy. No, she had stood there for over an hour waiting for him.

Something deep and elemental punched him in the gut. This was what it was like to have someone waiting for him. His return.

Riley is the youngest of six children and he equates family with chaos and neglect. He’s been on his own, enjoying his solitude, or so he believes but when he finally gets a chance with Rachel he deviates from his usual, casual relationships. The problem is that Rachel sees Riley as one night stand material. She wanted him; she had him; and now she’s unsure why he’s back asking for more. Riley’s even more disturbed when an ex girlfriend calls him the “good time guy”. A guy doesn’t become a SEAL, however, without the ability to pursue something to the exclusion of all others, overcoming seemingly insurmountable obstacles.

Thus begins Riley’s courtship of Rachel. He gets to know her, her dreams and what makes her tick and vice versa as Rachel and Riley travel around California visiting other B&Bs who have turned to Rachel for renovation advice. During these trips, Rachel brings along love letters she finds in the wall of the Sutherland Inn and reads them while the two are driving.

What I found interesting wasn’t Riley’s sudden reversal from rake to responsible family guy but the reasoning behind it. As the youngest of six kids, he received the leftovers of attention from his family, particular his mom and he undervalued himself. With Rachel, Riley realized he wanted to be the special person in her life. Rachel, however, struggled with allowing anyone in because her parents had a great marriage and she was waiting for that epiphany as to who would be the ONE for her.

I felt that some of the pacing was a bit slow and that the story used sex to fill in the transitions. While I appreciated that the one night stand was used as a source of conflict later (Rachel wonders aloud how she can trust her feelings when the encounters between her and Riley seem to be sex and more sex), I did wonder whether the multitude of sex scenes weren’t a crutch in the story. This may sound contradictory to my paragraph above where I thought that they scenes were well done but it isn’t. The sex scenes were well done. I just thought that perhaps character development took a backseat to the sex scenes from time to time.

I also felt conflicted about the use of old ancestral love letters found by Rachel in wall of Sutherlands. Obviously these were used to push the conflict along, but the letters combined with the playing cards that Rachel and Riley used (Fate cards) seemed a bit too artificial. Yet, I did like the letters and how the ancestral romance played out.

While no new ground is broken in this book and there is no subversion of romance tropes, I still found this gentle, sexy story to be quite romantic. Maybe it was the letters. Maybe it was the sweet way in which Riley wooed Rachel. Maybe it was the road romance traits. Whatever the reason, I thought this was a worthy follow up to SEALed and Delivered despite my conflicted feelings toward some of the plot elements. B