Sea of Tranquility is about a high school senior who moves in with her aunt about two hours from her hometown. Her transfer to a new high school is intentional. She wants to remove herself from everyone who knows her and everyone she knows. She doesn’t speak. Her parents agreed to this plan because the girl hasn’t spoken in nearly two years and they are desperate for her to be “better.” 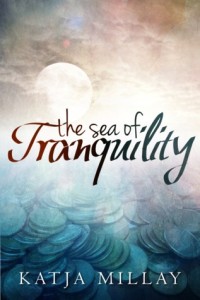 She dresses up as goth girl barbie: tight fitting clothes and a ton of makeup. Her goal is to alienate everyone and be left alone. (I didn’t understand that if she wanted to be antisocial why she would choose to dress in stilettos and skirts that barely covered her ass. These were attention seeking outfits and even at the end when Nastya was being fully honest with herself, this wasn’t addressed).

At the age of 15, Nastya Kashnikov was nearly beaten to death by another boy when she was walking home from school.  The reason why she does not know. He’s never been caught.  Nastya believes that she died and now she is this other being; the one without a dream of Julliard.  Barely able to make it through the night without nightmares; barely able to walk through the day without terror, Nastya writes down her assault every night believing it keeps her sane.  Her intent was to be alone but at her new school she is inexorably drawn to Josh Bennett.

Josh is an emancipated 17 year old boy who is best friends with a popular jock but interacts with almost no one else.  Nastya is intrigued by his solitude during school, the respect the students seem to pay him, and his almost force field like ability to keep everyone at bay. One night she goes running and ends up at his house where she finds Josh woodworking during the midnight hours.  When he doesn’t make her leave, she keeps returning.  He doesn’t understand why she is there, but the mystery of her makes it impossible for him to turn her away. Josh is an incredibly lonely young man. In some ways he is more nihilistic than Nastya but in others far more optimistic and open.

Other students play fairly large roles in the story.  Drew, Josh’s best friend, is an unrepentant man whore but becomes close friends with Nastya.  Sarah, Drew’s sister, is one of the evolving mean girls at school.  Nastya reluctantly becomes the subject of a amateur student photographer. There is a sort of Breakfast Club feel to it.  No one is exactly who they appear on the outside.  Drew isn’t just the manwhore.  Sarah’s anger toward life stems from resentment toward Drew that is only acknowledged late in the book.

What I liked so much about this book was how it was brought home for me.  Nastya acknowledges that she had been wallowing in self pity for three years instead of healing.  Josh makes a tough decision regarding Nastya and his relationship, one that is very mature.  Drew and Sarah’s secrets are revealed and make them three dimensional. The characters, even the villain, were nuanced.

The biggest problem is in the pacing. It takes a while to lift off, but I felt like the characters were very genuine. They talked about tough issues such as the existence of God, forgiveness, healing. Even though I chafed at the pace, in retrospect I am not sure what to cut. I would have missed reading out on some scenes. I do recommend the book, but I recommend it with caveats that it is slow and takes some time to delve into the characters’ point of view.

While the characters are in their teens, this definitely had a New Adult feel to it, in part because there is almost no parental involvement. Josh, as I stated above, is emancipated and Nastya’s aunt works nights, leaving the two alone together for large swaths of time. It was an emotionally satisfying book in large part due to the ending. There is no cliffhanger here. B

Previous article: Friday Film Review: Different for Girls
Next Post: A Sampling of What Dabney Read in October