Older women-younger men must be the new vampires. I’m seeing quite a lot of it in the past few months but that didn’t stop me from picking this one up. What can I say, I’m weak for (hot, hunky, muscled) sports heroes. 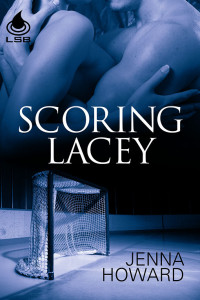 So, um plot. Older heroine who hooks up with her younger brother’s best friend who is ten years younger than she is. Shayne is a hockey player but – a goalie! He’s got great hands but can’t shoot for shit. He is hot for Lacey now that she’s tossed her two timing asshat husband out for shacking up with a twenty-two year old twinkie. But as much as Lacey’s loving the incendiary sex, she knows that this relationship is doomed. He’s younger, he’s her brother’s best friend, plus her youngest daughter is pissed about Lacey’s upcoming divorce and thinks her mom’s the villain while her dad can do no wrong. There’s just no way this can end well. Can it?

Well, you certainly set the {scene} for the type of sex we’re going to see in this book. I mean right off the bat from page one with Shayne’s sizzling hot mental images of what he’d like to do to and with Lacey. Most of which, if not all of which, eventually gets done. I hope Lacey enjoys it during the off season because I’m just not sure that any man, even if he’s only twenty nine, can keep up this level of sexing and a pro hockey career going at the same time. But Lacey’s the perfect age to appreciate his skills. And he certainly is skillful. Lacey produces more cream than the combined dairy herds of the entire state of Wisconsin as Shayne brings her to yet another mind bending orgasm. All women should suffer such a fate.

Initially the fact that Lacey is ten years older than Shayne didn’t bother me. When you threw in the fact that she used to baby sit for him and her little brother, that did get a touch skeevy. But these two are also fully aware of how the world will view their relationship. And also aware that they themselves don’t think it will last. So when it keeps lasting, and their hearts ache at the thought of separating and they agonize about the whole thing, I felt a little better that they weren’t blowing off the issues or papering over the problems.

Lacey’s relationship with her daughter Carmen is one reason I never wanted to become a mother. I don’t think I could stand the pain of my flesh and blood hurting so much and taking the opportunity to hurt me back. Mothers deserve medals for making it through their daughters’ teenage years. But what Shayne tells Lacey is so true – that Carmen acts out and acts up because she knows Lacey loves her regardless and will always love her and deep down, Carmen loves her mother just as fiercely.

There’s ample abundance of just how well Shayne and Lacey get along sexually. But I like that you include non sexing scenes of them. Scenes that show how much these two are truly coming to care for and love each other. When Lacey is hurting, Shayne’s first thoughts are to get to her quickly and do whatever he can to help her. When Shayne is losing it on the ice, Lacey can’t bear to be so far from him. And also some scenes of just how hard this relationship is going to be to keep going. The reality moments and less than perfect times that every couple share. I’m not quite sure how they’re going to work out forever since the book is rather open ended but I’m sure they will.

The “I’ve known him since he was four years old” aspects of the story still sort of squick me and Lacey’s brother certainly gets a touch womanly in his ability to parse through what’s ailing Shayne and in urging Lacey to fix her relationship with Shayne but I ended up liking the story and seeing Shayne and Lacey stumble towards their HEA. I just hope Lacey’s going to be able to handle those steamy Houston summers. B