I’ve been wanting to read more YA; the genre seems to have changed so much since I was a, well, young adult. There are so many fresh and exciting YA books being written these days, and that’s exciting to me, especially when I’ve just finished my umpteenth uninspired English historical. Even though some of my favorite YA novels of the past several years have been set in alternate realities (The Hunger Games and sequels, the Megan Whalen Turner series, Dia Reeves’ A Slice of Cherry), I tend to pass over such books when looking for something to read. I usually only read paranormal/fantasy books on the recommendation of other readers; maybe it’s just that such books absolutely glut the romance market and have for seemingly ages, but the minute I read the phrase “shape-shifter” or something like that in a book blurb, my eyes start to roll (yes, I know someday they’ll get stuck that way) and I begin sighing a put-upon sigh. Can’t I just read a normal book, about normal people? 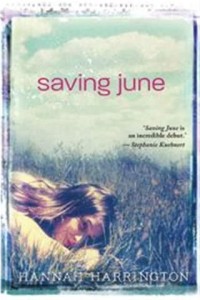 That sentiment is what brought me to your YA novel, Saving June – the blurb contained no fairies, vampires or magical goats. Rather, Saving June was about a teenager trying to cope with her older sister’s suicide. This sounded like a relatable, if grim subject. Harper Scott is sixteen years old; her sister June was just a year older, and about to graduate from high school, when Harper found her in the family garage, dead from carbon monoxide poisoning. In the aftermath, Harper is numb, her mother is coming apart at the seams, and her father (estranged from her mother and in the process of divorcing her) has withdrawn from the scene entirely.

It’s at the gathering after June’s funeral that Harper conceives of the idea of taking her sister’s ashes to California. California was a fixation for June, a destination as different from her small, dreary Michigan town as possible. June wanted to go to college in California, and Harper decides that California is where what is left of June belongs. She comes up with a plan with her best friend Laney to liberate the ashes and go on a road trip. The only problem (well, the only one they can think of; I thought of several, myself) is the lack of a reliable vehicle – Harper doesn’t drive, and Laney’s car is not up to a cross-country trip. That’s where Jake Tolan comes in.

Harper doesn’t even know Jake when she encounters him at June’s wake; later she vaguely remembers him from high school, but she was unaware that he knew June at all, never mind that he was close enough to her to be making her CD compilations and giving her CDs of some of his favorite artists – Tom Waits, The Kinks (artists that our young protagonist seems entirely unfamiliar with; man, I am old). It turns out that Jake made the CD compilation that was playing on the car’s CD player when June died.

Harper is pulled out of her ennui by her road-trip plan and by her curiosity about Jake and what seems to be his mysterious connection to June. Jake denies a romantic relationship with June (who had broken up with her cheating boyfriend shortly before her suicide), though he’s not exactly straightforward about the nature of their association.

Harper, Jake and Laney eventually head out on their road trip with June’s ashes in tow. I had some issues with this; even though neither of Harper’s parents was especially sympathetic, stealing all that they had left of their dead daughter seemed to me to be a heartless act. Strangely, this is not addressed until the end of the book, when Harper indicates that she hadn’t really thought of what taking the ashes would do to her parents. Which was oddly realistic in context; Harper’s a teenager after all, with a teenager’s occasional great lapses in awareness and tendency towards self-obsession.

This was actually a larger theme with Harper, one I had to work out my feelings about. She was a bit of a difficult character for me to warm up to, and I struggled with whether I thought her depiction was realistic. It was the old problem of the first person narrator; I can be a bit thick as a reader and can find it difficult to separate the first person voice of the narrator from the author’s intent. Harper’s worldview is very binary: June was perfect and she, Harper, is the screw-up. Laney is beautiful and outgoing, while Harper is plain and awkward. The black-and-white contrasts felt trite to me, but I had to remind myself that this was the world the way Harper viewed it, not necessarily objective reality as created by the author. I’ve known enough teenage girls to know that they aren’t always big on nuance, particularly if lack of same gives them an opportunity to sulk. Still, Harper’s relentless focus on how awkward and socially inept she is and how perfect everyone else appears to her to be became aggravating.

The road trip aspect of the story, I think, lightened the heaviness of the suicide theme for me. The trio have interesting little encounters along the way, some of which deepen their relationships or give a bit more insight into who June was as a person. In a sense, even though her suicide is the reason behind the trip, the trip itself allows Harper, and thus the reader, to sort of put off dealing with it.

When they finally arrive at their destination, in San Francisco, Harper is forced to confront both letting go of June and the secret Jake’s been keeping from her. The secret felt a bit anti-climatic to me; its purpose seemed to be to cause conflict between Harper and Jake, more than anything else.

I felt ambivalent about the resolution of the mystery of June’s suicide – there is no real resolution, and while the reader in me wanted something dramatic and emotionally cathartic, ultimately, again, the truth was more realistic. There’s no resolution because there was no single mystery: there was just a girl who kept a lot of things inside, and was in more pain than anyone around her realized. That’s not the reality of all teen suicides, but I’d guess it’s not a rarity in such cases, either.

There were events in Saving June that objectively felt trite: most notably, the resolution to a late-in-the-book crisis for Laney. In general, I guess the whole road trip dynamic was kind of trite, though it’s still very effective. Music plays a big part in Saving June; music is hugely important to Jake and it’s largely how he communicates with the people he cares about. During the road trip, the three bond and argue over their musical tastes in turn. As a lover of music (including some of the music mentioned in the book; Jake has eclectic tastes), I appreciated this aspect of the story a lot.

I don’t know that the hopeful ending is quite the right note; the suicide of one’s only sibling seems so devastating to me that it’s hard to imagine any sort of closure of the sort depicted in the book could be achieved in a few scant months. This is a case where an epilogue several years out might’ve worked better for me. Still, Saving June is a solid effort, and a welcome respite from fairies and werewolves. My grade: a high B.