Elinor Harriman is the quintessential elder sister of romance. To wit, she is desperately trying to keep her little family together by protecting, guarding and working herself to the bone. Simultaneously, she is, of course, trying not to let on to her younger, more beautiful sister, Lydia, exactly how desperate their circumstances have really become. These circumstances are entirely due to their frivolous mother. Years ago, Lady Caroline Harriman was divorced by her husband, Baron Tolliver, and her daughters disowned all because she was so brazenly unfaithful. Since that time, they have been living on the largesse of Lady Caroline's boyfriends or living on the hope of Lady Caroline getting herself a boyfriend. But now, due to their mother's past frivolity and current syphilitic madness, the Harriman sisters are in dire straits ("money for nothing and your chick for free"). They are living in precarious circumstances in a rotting neighborhood in Paris with only their beloved Nanny Maude and their man of all work, Jacobs, both who are less servants than family. 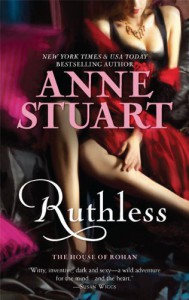 The book opens with Elinor returning from a lawyer's office. Their father is dead and though he never provided for them in life, it seems he has left them something in death. Unfortunately, that something is in England and with the family finances as they are, it might as well be in Timbuktu. To make matters worse, Elinor arrives home only to find that Lady Caroline has managed to arise, like a syphilis ridden Lazarus, and abscond with the last of the family jewels. Forced to follow, Elinor and Jacobs "borrow" a coach and drive off into the night, knowing full well where Lady Caroline is headed. She's gone to the house of the Comte de Giverney, the notorious Lord of the Heavenly Host-‘a group of aristocrats who throw orgies the likes of which populated the imagination of the Marquis de Sade, or so the rumors go. But into the fray goes Elinor, after her mother and her money. She doesn't have a choice, after all.

Like all good rakes, Francis Rohan, Comte de Giverney, is suffering from ennui. I understand. I mean, there are only so many mock, Satanic rituals a man can go to before it's like, same old same old. This is really a classic Stuart-ian set up. Ennui-ridden rake, whose reputation is almost as bad as the aforementioned de Sade, meets spinister-ish, put-upon Virgin, who's just trying to do her job, damnit, and keep her family together. Satanic rake can't figure out what the attraction is. I mean, she's not really his type, all that innocence, etc. And hell, she's not even that pretty. But there's something about her . . . maybe if he shags her the strange feeling will go away. Oh my god, no! It's only gotten worse and now it's being accompanied by some foreign and hitherto unknown need to protect her and smell her hair. Panic! Panic! Flee! Hey, dude, at least you're not suffering from ennui anymore, eh? Eh? -wink, wink, nudge, nudge-

Francis Rohan is a Stuart hero, para-excellence. First of all, he is clearly a Scorpio. Second of all, well, I'll just let Elinor explain the second of all, shall I?

The King of Hell was everything they said he was, both less and more. He was reputed to have the ability to seduce an abbess or the pope himself, and she could see why. It wasn't his physical beauty, which was considerable. He had dark eyes behind a fringe of ridiculously long lashes, pale, beautiful skin, the kind of mouth that could bring despair and delight-‘and what the hell was she doing, thinking about such things?

If I ever meet a man who has a mouth that can bring both despair and delight, I'm going to chloroform him and marry him in a barely legal marriage ceremony in one of Las Vegas' more tawdry chapels. But I digress.

So Elinor is understandably attracted to Rohan. However, this is not a state of affairs she likes much. She distrusts men in general. A natural enough reaction considering her absent and uncaring father, the parade of debauched protectors her mother has gone through and her own experience with a Sir Christopher Spatts. So when Rohan starts generously sending the Harrimans things like groceries and chairs, Elinor is naturally suspicious. Moreover, she can't help but believe the person Rohan is really interested in is her sister, Lydia. This, too, is a natural enough reaction considering the fact that Rohan purposely flirted with Lydia to make Elinor believe just that. We, of course, know better. And in any case, Lydia has no interest for the reprobate Comte. All her attention has been taken up by his friend, Charles Reading, who is equally smitten with her.

Further tragedies await all these people before their relationships can evolve into a HEA, including, but not limited to the mystery of who is out to kill Francis Rohan, the Harriman sisters' mysterious cousin, the new Baron Tolliver, and the death of their mother, Lady Caroline. The last puts them further at the mercy of the nefarious, Rohan, who takes them in after she dies-‘and certainly not out of the goodness of his hear. Oh no! He's obsessed with Elinor at this point and trying to get her out of his system. Ha!

I admit it. I totally love this kind of plot-‘aging spinster meets rakehell-‘and usually, you do it so well! But something was missing for me in Ruthless. It's your own fault, Ms. Stuart. I've come to expect a lot from you. It wasn't so much that this particular plot deals with one of you oft-treaded themes. No, I've read most of you backlist and I never get sick of this scenario. That's not the problem here.

See, all authors-‘and I do mean all authors-‘have one plot/theme they are utterly obsessed with. Everything they write is an attempt to perfectly render this one plot/theme. This is true of everyone, regardless of genre or time period. Sometimes, they have more than one plot/theme they do this with, but usually there is only the one. For example, Othello is Much Ado About Nothing is Cymbeline is The Winter's Tale (wrongly accused of infidelity, woman dies or "dies"). You get the idea.

In this ever-pressing quest to manifest the plot/theme perfectly, there is the risk that you don't get it right sometimes. Or that sometimes it works for some people and sometimes it works for others. It's one of those mysteries of art that can never be solved. It isn't about originality (which is a silly notion, in my opinion), because romance deals heavily in archetypes and we often see the same plots over and over. This doesn't detract from the pleasure or the excellence of a well-told story.   What it is about is some kind of magic-‘the magic between the author and the story, the text and the reader that just makes a book . . .   marvelous. And I'm afraid that Ruthless suffered from a lack of   . . . something that missed that magic for me. This is where it gets tricky to articulate but I'm going to give it my best shot.

I think my main problem was that I just didn't believe in Francis. Everything hangs on Francis. It is Elinor's reactions to Francis that frame the story. It is her meeting him that changes their lives. In the case of this book, a lot hangs on the hero. Francis uses the fact that he believes he's bad as an excuse for pretty much everything he does, but after the umpteenth time he says he must be doing these out of characteristic things because he's bored, I failed to believe that was the reason. Or more to the point, I failed to believe that he believed that was the reason. I didn't really believe he was bad, and I couldn't believe that he believed he was bad nor could I believe that Elinor couldn't see he wasn't bad. So much depends upon Francis being able to trick both himself and Elinor into thinking he is a rotten son of a bitch, when in fact he's not. This is at the heart of the barrier between him and Elinor, and at the heart of Elinor's resistance to him.

For instance, in The Devil's Waltz (my favorite of yours) I completely believed that Christian was absolutely and indisputably capable of doing something really awful to Annelise. Even though I knew there would be a happy ending, I felt the risk of it going all horribly wrong. You made me feel that there was a real threat of loss and pain, not only in the greater story but in the moment when Christian says, "I don't speak French," I felt the sting just as much as Annelise did. That risk of pain and heartbreak that you executed so well in The Devil's Waltz just did not present itself in Ruthless. To me, Francis Rohan was like Neil Patrick Harris-‘he only played the rake on TV. And man, I wanted to believe in he was that bad. Or at least believe that Elinor or Francis believed it, which I couldn't quite get my head around.

That's not to say that I didn't enjoy the book. I did. Just not as much as I had hoped to. B.

This book’s official pub date is August 1 but it is already shipping and likely in stores.