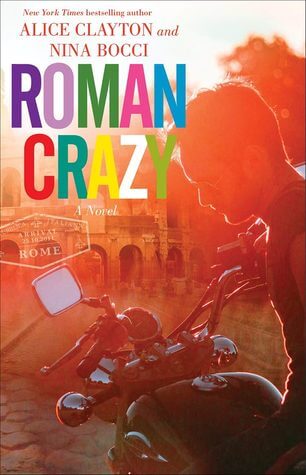 Avery Remington caught her husband, Daniel,  in flagrante delicto boning his secretary in his law office. She decides to leave him but it’s for more complicated reasons than that he was a cheating cheater who cheated. The passion between the two lovers was galaxies away from anything she had shared with Daniel. Avery takes a good long look at her marriage and realises that she lost herself along the way, immersing herself in making Daniel’s life just so and taking virtually nothing for herself. (There’s a reason for that as well but as it is revealed late in the book I won’t spoil it here.) Dissatisfied with her wealthy but shallow life and uncertain of what she should do next, she leaves Boston and travels to Rome where her BFF, Daisy, lives.

Daisy is an architect for a large firm based in Rome but she works all over the world, particularly on projects which involve preserving and restoring historical buildings and pieces of art. Daisy and Avery met in college where Avery was studying art history and conservatorship. It was always Avery’s plan to work in an art museum restoring pieces to their former glory, and to continue to sketch and paint, for fun if for no other reason. But Avery hasn’t picked up a pastel or a paintbrush for many years – it was part of a life she left behind and she is suddenly desperate to find it, and herself, again.

Avery had always wanted to travel around the world and soak up the history and art in all the classical places. She had spent a summer in Barcelona during college but after she returned, things happened and she ended up marrying Daniel pretty quickly and travel was mainly to beach resorts. A first world problem, sure, but not what she had planned.

In Rome, Avery comes alive again. She rediscovers her love of art. She immerses herself in the scenery, the passion and the people of Rome and in doing so, finds herself – an older and wiser version of her 21-year-old self certainly, but also a much happier and vibrant person than who she had been in her marriage to Daniel. (Daniel wasn’t all bad – there were reasons things didn’t work between them and Avery takes responsibility for her part in how things ended up.)

Avery, now going by her maiden name of Bardot, also finds something else in Rome. Or, I should say, someone. Marcello Bianchi is also an architect and it so happens that he and Daisy work at the same firm. But Avery knew him first. When she was a college student in Barcelona nine years earlier, she and Marcello had a passionate affair. She left Barcelona intending to find her way back to him but event overtook her plans and she ended up staying in Boston and marrying Daniel. She never broke things off with Marcello – she did the fade away and broke his heart. And she never told a soul about it. Not even Daisy.

It’s clear from the start that Marcello and Avery have scorching chemistry. But before that can be explored, Avery needs to apologise and Marcello needs to forgive her for leaving him in Barcelona. While that happens quite early in the story, it surprised me that the explanation for why was significantly delayed. I struggled a little to understand why either of them were content to let the elephant hang out in the room go for so long.

The story is told from Avery’s first person POV and there were some things about Marcello which remained somewhat mysterious to me because of that. To reveal one of them would be too spoilerish but there was one thing in particular I wanted nailed down which was left a little too vague for me. That said, there was a lot of dialogue and Marcello’s actions, in the main, spoke volumes of his love for Avery. I had no difficulty in believing in their HEA by the end of the book. And there is a HEA – I think the story has a large dollop of women’s fiction to it, it is absolutely a genre romance as well.

While I dislike the term “women’s fiction”, it is nevertheless a term DA readers would be familiar with. A large part of the book was about Avery rediscovering herself and her life, of moving on –  from her marriage to Daniel and the things which had led to its demise. Indeed, this was the backbone of the story. Ultimately, Avery started to put herself first and advocate for her own needs, wants and desires. Over and above a happy ever after with Marcello, she also found her feet professionally and artistically and personally.

Rome itself was a major character in the book. (I so want to go there now.) Roman Crazy had a wonderful sense of place. It pervaded all aspects of the story. Gorgeous descriptions of Rome and Romans peppered the book.

We weaved in and out of the Piazza di Santa Maria’s labyrinth of streets. Glittering mosaics that were baked into the masonry glinted as the fading sunlight blanketed the buildings in a golden glow. The centers of the streets were filled with terra-cotta planters, ivy, and bright red flowers pouring over the edges. In the approaching sunset, they were bathed in gorgeous golden hues.

And pedestrians. Hundreds walked about like a Roman heartbeat livening up the city as they took in dinner menus or window shopped. Some shared a gelato or a glass of wine. It was nice to see people out enjoying their city, just for the pleasure of it. No one seemed to walk simply to enjoy Boston anymore. We were always in a rush or had a faceful of technology. But you could tell that for the people who lived here, Rome was their backyard, their front yard, their living room, their dining room . . . and maybe even their bedroom.

The descriptions spoke so eloquently and lovingly, it seemed to me that one or both (probably both) of you had spent some time in Rome soaking up the atmosphere (and possibly trying to get a glimpse of George Clooney).

I’m a romance reader first and foremost so of course my major interest in the story was the developing relationship between Avery and Marcello. I did have some discomfort however. Daniel cheated on Avery – probably many times – but Avery actually cheated first. She and Daniel were dating when she went to study in Barcelona. It took a while, but eventually (and I was glad for this) Avery herself acknowledges this.

That was the thing, though. This little sticky sticking point. I had cheated. Years ago. So was I mad that Daniel had cheated? Yes, but was I more mad that it made us the same?

But when I cheated on Daniel with Marcello . . . oh my God I’d do it again in a second.

Perhaps it is a more realistic story because none of the characters are perfect, but I admit I prefer a hero and/or heroine who does not cheat.


Given that Avery had cheated as well as Daniel, I was glad that Daniel wasn’t painted as a complete demon. While he was far from perfect, he wasn’t a stereotype and he was clearly capable of deep emotion.

Speaking of deep emotion, there was another thing (to do with the first spoilerish thing I referenced above she says vaguely) which lacked some detail and I’d have liked to know what actually happened there. Or rather, how.


I thought it was serendipitous indeed for Avery to be offered work in Rome restoring works of art. She had not done any of this work in nine years after all and, in fact, had never done any of this work outside of college. While I am well aware from personal experience that jobs are often about who you know and not what you know, it seemed a little too far-fetched that she would be so ready to dive in and for her to be so universally accepted in doing so.

Notwithstanding my discomfort with the cheating and the lateness of the conversation which explained all to Marcello, I did find the connection between Avery and Marcello charming and sweet, as well as sexy and hot. Avery does jump into a full on relationship with Marcello almost straight after deciding to end her marriage to Daniel and perhaps that wasn’t the wisest course, but in the end I was convinced that she was making a good decision being with Marcello and she wasn’t just rebounding.

While the book has two authors, I could detect no obvious shift in style or tone as the story progressed. It read very smoothly to me – as if one person had written the whole.

I loved the setting and the romance and I enjoyed Daisy and her friendship with Avery. And, I loved how the story ended. It demonstrated just how much Avery had grown in the book and tied into the other story aspects as well.