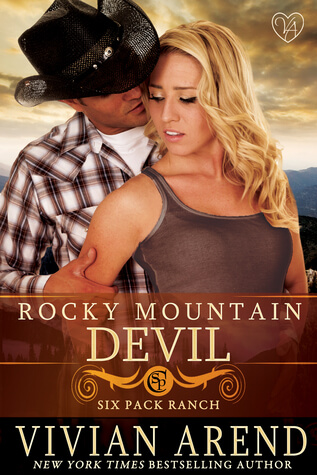 Note to readers: If you are sensitive about pregnancy loss, this may not be the book for you.

I’ve been a fan of your Six Pack Ranch series for a while. We are nearly coming to the end of the Colemans alas (only Jesse’s book is left). Rafe Coleman is the youngest of the “Angel Colemans”. His best friend since childhood is Laurel Sitko.

Around them, the children from his kindergarten class ran and screamed, laughing and burning off energy before they got pulled back into the portable trailer that was their classroom. But here in the sandbox he’d found a quiet refuge.

She tilted her head to one side, long white-blonde hair in pigtails glowing in the sunlight as she examined him. Her pale blue eyes sparkled, and she nodded firmly as if happy with what she saw.

And then she spoke, and even her voice was different than the other children’s. Sweeter, and kinder, and perfect.

“Want to build a racetrack?”

Laurel is a PK (preacher’s kid) and after high school graduation, she’s headed to Bible College away from Rocky Mountain House. Rafe is ranching with his brother, Gabe, on the family’s land, and desperately trying to avoid continuing confrontation with his father, Ben.  The night before Laurel leaves, she and Rafe kiss (and more) for the first time but they make an agreement not to hold off living their lives when they’re apart. If they’re both single when (or if) Laurel comes back home, then they will see where this attraction will take them.

The main story picks up when Laurel returns to town three years later. They are both single and agree to date. Rafe wants to take things slow as they explore their changed relationship but he quickly realises there is competition for Laurel’s affections, in the form of Jeff, an ex-boyfriend from Bible College, who is a candidate for youth pastor at her dad’s church. Laurel doesn’t appear to want anything to do with Jeff but Jeff isn’t taking no for an answer. (Jeff is a dick.)

Readers know from the prologue that there has been a death in the Coleman family. Just exactly who dies isn’t revealed until nearly the end of the book but it wasn’t terribly hard to guess. (For those who might be worried, it is not one of the previous heroes or heroines.) Readers also gain a tantalising glimpse of just what has been up Jesse’s ass for months and months – although there is plenty more to be revealed in the next book (because you are a meanie secret-keeper Vivian Arend!)

The theme in the book is very much around parents and children and the griefs and joys associated with those relationships. Rafe doesn’t get along with his dad at all. Ben Coleman became bitter and awful, drinking heavily and mean with it, after his eldest son, Mike, died. Rafe is terrified he will end up just like his dad and this is something he needs to work through before he and Laurel can reach their HEA.

While the romance is relatively low-angst, there are some heavy topics canvassed in the story. There was a particular conversation between Allison and Laurel which struck a chord and rang very true. I found certain parts of the story very difficult to read but I thought you showed a deft hand here, neither glossing over something important nor overdoing it.

As always, the sexual connection between the main characters was strong and the intimate scenes were creative but also fun, which fit with the longstanding friendship between Laurel and Rafe.

Perhaps if some of the subject matter hadn’t pushed a couple of my personal hot buttons, I’d have enjoyed the story a little more. Even so, Rafe and Laurel’s journey was well worth my time, albeit a little heavier than I had been expecting and it is always nice to catch up with the wider cast of the series.