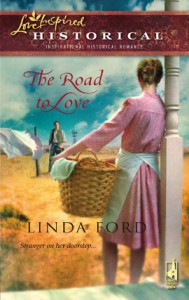 It’s hard to read the blurb for “Road to Love” without mentally comparing it to the Mother of All Depression Era-Widow-Marries-Ex-Con-Hero novels but I think your book will stand on its own merits. Initially upon reading the blurb I thought, “I’ve read this before. I’ve seen it done excellently
before. What else is there to write about this plot?” The answer is: a lot.

It has great period details (at least from what my mother has told me about growing up in that era) and a realistic view of what women alone faced then. The patronizing attitude as Kate tried to discover the truth about the robbery, the patronizing attitude of Doyle feeling he knows what’s best for Kate and her children and that she’d give in and let him run her life, her fears of revealing too much about her widowhood to any passing man. And of course the same problems that still face today’s women such as balancing work and home life, child raising, and being both mother and father to their children.

This is life before antibiotics, before baby formula, before drip dry clothes, before huge grocery stores. Death from diseases was common, women had to sweep their floors and wash dishes by hand after boiling the water to do it in, families were much more dependent on what they grew or raised themselves and even young children were expected to pitch in and help in any way they could.

Hatcher has let guilt drive him down the back-roads and rails for 10 years. In this age of shrugging off responsibility to others for our own actions, it takes a shifted mindset to try to understand how he’s let this go on for so long and how he still doesn’t plan on letting go of his burden and remorse. I like that you don’t build up a mountain and then present us with a molehill for Hatcher’s past. He did have problems, he did get into the fight and grievous harm resulted. He does have reason to feel guilty. Perhaps he dismisses the harsh words his father spoke to him a little quickly but he’s had ten years to feel the responsibility was his and that he doesn’t deserve forgiveness.

Kate is such a strong person but I’m glad you didn’t turn her into a superwoman capable of running her farm single-handedly or being unwaveringly serene in the face of the issues confronting her. She has moments of self doubt, times when her children try her patience and instances when no matter how hard she tries, things just don’t go her way. She works things out as best she can with the skills and feelings that seem realistic for 1932.

I can certainly understand her need to keep her farm. After a rootless childhood, security and a roof over her head would be things she’d cling to at all costs. Plus this is the Depression when so many lost their homes and farms. Kate’s seen hobos tramping by her farm for years and she wants to spare her children that fate. The fact that she’s willing to trade all this to help Hatcher speaks of how deep her love for him is.

Children usually don’t work for me in romances but I liked Dougie and Mary. Though Mary tried my patience as much as she probably did Kate’s, her reactions to stress and change reflect the loss of her father. And thank you for having them act and speak as real children. No lisping angels here.

Kate’s dragging courtship with Doyle gave me a few problems. How could she have not seen anything about his possessiveness and dictatorial style? Or had she just brushed it off, knowing she didn’t want to marry him and being willing to put up with it for a man’s companionship to public events?

I felt the conflict was reasonable and character based. Hatcher won’t allow himself to stay in one place as he doesn’t want to bring trouble to anyone, including himself – and doesn’t feel worthy of having a home or people to care about anymore. Kate can’t get anyone to understand just how much the farm means to her and that even with all the hard work involved in keeping it going, she won’t easily give it up.

This is a faith based romance and despite your stated intentions not to preach at your readers, I still wondered how I would feel about reading a “Steeple Hill Love Inspired Historical.” I think you manage to tell a story of two people who have strong faith without turning the story into a pulpit. The frequent Biblical quotations make sense in a book set during an era when church attendance was higher and memorizing scripture a more common thing. I didn’t feel the story was too platonic without any bedroom scenes nor did I miss them. I did feel a connection between Kate and Hatcher. One that I’m certain will be fulfilled. B