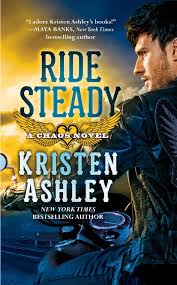 I don’t know what it is about your biker heroes, but they seem to work for me on almost every level. I loved Tack Allen from Motorcycle Man, and have really enjoyed the Chaos series heroes as well. Turns out, Joker is no exception.

Carson Steele is abused. His dad is a nasty drunk, they type who beats on his kid when he overindulges. Carson just wants to get through to his 18th birthday and get the heck out of dodge. In the meantime, he’s in school and has a real interest in cars, and in Carissa Teodoro, even though she’s way out of his league. She’s a cheerleader, and popular and beautiful and everything clean and right in the world. While she’s nice to him, she would never consider dating him.

But after a particularly nasty fight with his dad, Carson determines he’s got to get out of the house  now. He packs up, says goodbye to the only two people, his neighbors who have ever been kind to him and takes off for parts unknown. But before he goes, he sees Carissa. They have a really nice exchange where she asks him if he’d like to go get a bite to eat. He turns her down, and she realizes he’s leaving town. She wishes him a beautiful life and watches as he leaves town.

Flash forward nine years. Carissa is stranded on the side of the road with her baby, Travis. The tire on her piece of crap car is blown and she has no idea what to do. The baby is fussy and she can’t put him down, but needs to get the tire changed so she can get a move on. When a big bearded man on a motorcycle stops to change her tire, she’s both nervous and grateful. The biker introduces himself as Joker, and tells her that she should bring her car to Ride and they’ll get her hooked up with new tires. She’s blown away by both his kindness and how good he is with her baby. So she heads to Ride, where she’s taken under the collective wing of a group of bikers, which is good for her.

You see, Carrisa married her high school sweetheart, Aaron. Aaron is the child of a judge, and became a prominent attorney himself. This was before he hooked up with a much younger model of Carissa and kicked her out of his house and made it so she received no child nor spousal support. Carissa now lives in a ramshackle, sketchy apartment and works at LeLane’s, a high end grocery store, as a check out girl. Her life is nothing like she thought it would be. She can’t afford a good attorney, and the latest one she visited suggested that she could render payment on her knees. So Joker’s kindness paired with the kindness of a group of scary looking bikers is both welcomed and horrifying to Carissa. She determines that she’ll need to repay Joker in some way, but has no money. So she dresses up, bakes a pie and heads to Ride to express her gratitude. Joker is standoffish when she arrives, but she perseveres, trying not to take his coldness personally. It’s not until she takes a ride on someone else’s bike that Joker acts on his feelings for Carissa. He begins a full out pursuit of her, helping her in a variety of ways, including helping her find a new, safe home, taking care of her baby, cooking for her, and finding her affordable daycare. Of course, Carissa falls for him immediately, having never had kindness from a man before. But what will she do when she realizes that her biker is actually the boy from high school that she had a crush on?

This is one of your quieter books. The story is focused squarely on Joker and Carissa’s love story, which works perfectly well for me. I’m a fan of your alpha heroes, so Joker’s pushier behavior didn’t phase me at all. What I loved is his Caregiving Alpha vibe, and the way he provides unwavering support for Carissa. Her ex-husband starts out the book as a jerk and you warm him up some at the end. Not enough for me to root for him, but enough that I bought that they could get along. Overall, the story has all of the things that I love about your books. A strong, slightly overbearing hero, a heroine whose internal monologue is funny and sweet and a romance that keeps the focus squarely on the couple. Ride Steady gets a B+ from me and a strong recommendation for fans of relationship focused romances.

→ Kati
Previous article: REVIEW: The Girl Next Door by Amy Jo Cousins
Next Post: REVIEW: Anything for a Cowboy by Jenna Bayley-Burke