(Dabney’s disclaimer: I know Jennifer and occasionally attend a book club she runs.)

I’d wanted to read this book for quite some time. Jennifer Lohmann entered Harlequin’s “So You Think You Can Write” contest in 2011 and was offered a contract. I’d met Jennifer earlier in that year when I interviewed her about being chosen as RWA’s Librarian of the Year. Since then, I’ve gotten to know Jennifer through a Romance Novels book club she runs at the library where she works. When I heard she was publishing a romance of her own, I asked for a copy. I was hoping I liked the book and am pleased to say I do. It’s not perfect but it’s got winning leads, an interesting conundrum, and a wonderfully clear sense of place. 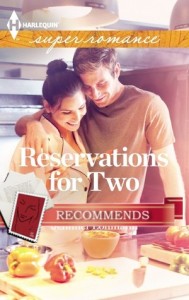 Tilly Milek is living her dream: just a few years out of cooking school, she’s opened a restaurant of her own in her hometown of Chicago. The restaurant, a gourmet Polish place called Babka, is just getting established when, much to Tilly’s fury, Chicago’s most influential restaurant critic, an anonymous blogger with the moniker The Eater, writes a scathingly negative review of it. He writes that, the night he and his party were there–and Tilly and her staff have no idea who they were–a stray cat and a diner’s dog got into a fight on the restaurant floor. That, however, was not his biggest problem; he claims the food at his table was oversalted, “each  dish he had ordered was like a salt lick.” Tilly is sure he’s lying or wrong or something for the food from her kitchen is always perfect. Furthermore, the Eater has broken a cardinal rule of restaurant reviewing -he’s only been to Babka’s once. Thanks to this jerk, she fumes, Tilly’s dream is about to tank.

The Eater is a guy named Dan Meier. Dan comes from an uber-wealthy family (“Meier Means Dairy.”) that he has deliberately chosen not to work for. He and three of his friends from college work together on their popular blog, CarpeChicago, and Dan’s made quite a name for himself as a food critic. He considers himself an ethical critic and is defensive when his friends tell him his review was unfair. One thing he’s sure of: no critic worth his sea salt ever questions his reviews. But Dan’s ethics–and his conviction that Tilly’s place serves poorly prepared food–are put to the test when he meets Tilly (at first he doesn’t know who she is) the Saturday after his review at Chicago’s huge food festival, Taste of Chicago.

Dan falls for Tilly almost immediately. She’s an unusual and intriguing woman and he can’t stay away from her. As he pursues her, he jiggles his ethics, telling himself that he isn’t really doing anything wrong. He debates with himself constantly which leads to something I’ve noticed happening more and more in contemporary romance: the Oprahfication of exploring a character’s psyche. This trend doesn’t do much for me. I tend to zone out when there is sentence after sentence of “here’s what I’m thinking and why.” I like Dan; I especially liked that he’s not making the best choices in the first half of the novel. His behavior is fairly crappy–he doesn’t tell Tilly who he really is which creates a huge power imbalance in their relationship–and he knows it. I enjoyed watching him first fail and then, with great effort, begin to succeed at not being so self-centered; I would have enjoyed this even more had I heard less about it as it plays out in Dan’s head.

Tilly is a nifty heroine. She’s incredibly driven and takes her responsibilities in life–her restaurant, her employees, her family (I really like her family.)–very seriously. So seriously, in fact, she’s turned into all-work-and-no play Tilly. It’s clear she needs some fun in her life. When she meets Dan–before she knows he’s the Eater–he makes her feel fabulous. Tilly is admirable and easy to root for. She never lets her desire for Dan compromise her dreams or her sense of what’s right. Even when the future of Babka seems bleak, Tilly soldiers on, cooking amazing food, marshaling her staff and her resources. Plus, I love her bright blue hair.  (It’s irritating that Harlequin put a brunette on the cover.)

Though she had stopped being self-conscious about her hair all the time, she had attracted a different type of male attention since the change to blue—the two-eyebrow-piercings-tongue-stud-with-a-tattooist-named-Butter type of men who expected her to buy fetish shoes at the Alley.

Men seemed to think she was wild, when in reality she was a thirty-year-old woman stuck with a bet she had made when she was eighteen.

Tilly and Dan as a couple felt read to me. Their relationship evolved slowly–they both have full lives apart from each other–and I believed in the ways they fell in love. One of my favorite scenes between them takes place right before Dan repairs the clogged pot sink in her kitchen.

Dan was waiting by the front door when she came down the stairs, a large toolbox in his hand. He was dressed in a pair of old cargo shorts and an olive T-shirt, and she could see he had an athletic shape, with strong arms, powerful legs and a muscled chest. Tilly didn’t need any imagination to picture the flat stomach or the ridges of muscle hidden under his clothing.

She stopped on the stairs and swallowed. Dan looked like a page out of a man-of-the-month calendar—large, masculine and ready to come to a woman’s aid.

Is he going to kiss me again?

Hell, I’m a modern woman. Am I going to kiss him?

The thought of another kiss—and the possibility of more—made her feel as if she were standing in front of the hot stove on the sauté line in July in Miami.

She was staring, openly, blatantly staring. How embarrassing. For all she knew, she was drooling, too. It would be the perfect story to tell Renia—a gorgeous man agreed to help her repair her sink and she rewarded him with drool. She shut her gaping mouth and searched her brain for something clever.

“You look better than my plumber.” Not clever at all.

Didn’t cover up the drooling. Shoot.

“You look better than my plumber, too.”

Ms. Lohmann does an exceptional job of creating a sense of place in this book. Chicago is, well, Chicago. She also presents cooking and the restaurant world with pin point accuracy. This sense of place makes Reservations for Two an interesting and educational read. I finished this book happily knowing far more about Polish cuisine than I did when I began it.

I did struggle some with the pacing in this book. Part of my problem stemmed from all the internal chitter-chatter and part came from the plot. I liked the plot, but I felt the story would have been stronger had Ms. Lohmann been sparser in her prose.  The novel is just over 300 pages; I think it could lose about fifty of those and be a more compelling read.

Overall, I enjoyed Reservations for Two. There’s an interesting mystery as well as the whole “How does Dan undo his bad review” storyline. The novel feels current and viable; the leads are likeable. The HEA is blessedly proposal and babies free. I give the book a B.