Reader Statch recommended your books a few weeks ago.   Fortunately for me two things existed.   First, the four books preceding Red Hot Renegade were already digitized and easy for me to purchase and download. (FN1).    Second, I didn’t have long to wait until the fifth and final book in the series was released, namely Jacob’s story.   The second was almost more important than the first because Jacob’s failed marriage to Jianne   plays an important part in some of his siblings’ reluctance to form permanent relationships thus seeding the burning desire of this reader to know exactly why Jacob and Jianne’s marriage did not last.   Of course, I did have to buy Red Hot Renegade from Mills&Boon UK but what’s a little international purchasing when it comes to fulfilling a reader’s desire for a book? 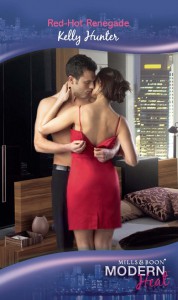 Jacob Bennett and Jianne Xang-Bennett were married shortly after Jacob’s parents died and left him with four siblings to raise. For a multitude of reasons, all dribbled out throughout the course of the book, Jianne left Jacob and the two have been separated for twelve years. Neither has made any attempt to legalize the separation.

Jacob has always felt an enormous amount of guilt at bringing Jianne into his household and thus holds few feelings of animosity toward her. He is a bit resentful that he learned after they were married that Jianne’s personal wealth rivaled that the GNP of small countries. What he does now feel is longing, want. Jacob lives a life of austerity, both in spirit and in deed and thus denying himself is easy and of long standing habit except when faced with Jianne.

Jianne also feels guilt for not staying. She was unsure of Jacob’s love for her and unready to be the mother figure to four teens; but her desire for Jacob never waned. Immature when they married, Jianne never fully understood Jacob and she didn’t stick around to learn. Of course, believing that Jianne was better off without Jacob, he never pursued her leaving Jianne to believe Jacob was as unhappy in the marriage as she.

Fast forward twelve years. Jianne has caught the attention of a very shady character from Taiwan who deems Jianne to be the next perfect acquisition to his collection of beautiful objects. Jianne’s uncle seeks out Jacob and suggests that if there was ever a time to take action on Jacob and Jianne’s separation, it would be now. In other words, does Jacob love her and want to rekindle their relationship or should he not let her go. This brings Jacob and Jianne face to face for the first time in twelve years.

Initially it seems that nothing has changed. Jianne refuses to ask for what she wants and Jacob is uncomfortable in Jianne’s wealthy surroundings.

Jianne recoiled as if he'd struck her.

Jake gritted his teeth and prayed for mercy. "Must you flinch every time I look at you?'

"Must you glare every time I open my mouth?' she replied in kind. "People pay rent when they live in a place that's not their own. Why is my offering to do so such an insult to you? Is your pride such an enormous thing that there can be no room for mine?'

At its core, Jianne and Jacob’s initial problems seem to consist of uninformed expectations and maturity. The question that always remained in my mind was why the twelve years of separation? Did it take both of them twelve years to grow up? Maybe.   They both act like a couple of martyrs from time to time. Jacob calls Jianne on it, but no one really calls Jacob on it.

I can’t say definitively whether readers unfamiliar with the previous books will find it hard to start with RHR, but I think it’s fairly self contained.   In fact, there were times that I wish the stories had been slightly more referential.   For instance, I didn’t see any acknowledgment by either Jiane or Jacob that their failed marriage had affected Jacob’s siblings relationships.

My enjoyment of the story was tempered by the things I felt were missing in the story.   I would have liked to have seen more of the initial courtship and marriage.   I wished that there was some explanation for why the separation was so long.

One of the more compelling sides of the story was Jacob’s dark nature and how he had funneled his energy and desire for violence into training karate. In taking on a street kid by the name Po, we see Jacob’s natural leadership and caretaker tendencies come to the forefront, no matter how easy going Jacob tries to portray himself.   Jacob has this belief that Jianne is too innocent, too pure to be exposed to his dark side.   Jianne, after deciding that she could no longer live without Jacob, set about making a place for herself in Jacob’s life.

The story had a lot of build up from the previous books and generally, the final book in a series falls flat because of the increased expectations.   Red Hot Renegade, though, for all its flaws, delivered a strong emotional story. Both characters are very likeable.   I enjoyed the Singapore setting, the slight multicultural feel, and I adored the speech that brother Lucas gives to Jacob toward the end of the story.   Finally, I gave the book a “B” because I really had my doubts that the fifth book about the heart of the Bennett family might fall on its face and it didn’t.   I ended the book with a good feeling.

FN1. The five titles in this series include Red Hot Renegade and these others (all of which I enjoyed):