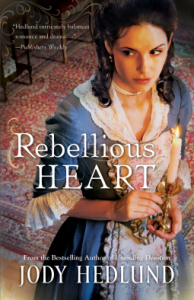 In 1763 Massachusetts, Susanna Smith has grown up with everything she’s ever wanted, except one thing: an education.

Because she’s a female, higher learning has been closed to her, but her quick mind and quicker tongue never back down from a challenge. She’s determined to put her status to good use, reaching out to the poor and deprived. And she knows when she marries well, she will be able to continue her work with the less fortunate.

Ben Ross grew up a farmer’s son and has nothing to his name but his Harvard education. A poor country lawyer, he doesn’t see how he’ll be able to fulfill his promise to make his father proud of him. When family friends introduce him to the Smith family, he’s drawn to quick-witted Susanna but knows her family expects her to marry well. When Susanna’s decision to help an innocent woman no matter the cost crosses with Ben’s growing disillusionment with their British rulers, the two find themselves bound together in what quickly becomes a very dangerous fight for justice.

It’s rare to find a romance these days set in Colonial America and when I do, it is usually set during the Revolution. So I was delighted to see this one taking place in 1763 and including a lot of the tensions that would eventually lead to the break with the Mother country. It also features a hero and a heroine who are mature enough to not hold past grudges against the other – or at least not for too long. What a nice change.

There are lots of sources of conflict both between Susanna and Ben and between the Mass Colony residents and the Crown. I do wish that Lt Wolfe wasn’t quite such an ass but he’s leavened with his kind hearted Sergeant and with Ben’s merchant friend thus showing that not all Englishmen of the time were jerkwads towards the Colonists.

I enjoyed seeing a man looking to marry up for status since so many romances feature women more or less “on the make.” Ben has ambitions but no social status and is well aware that Susanna – in years past – and her mother – now – don’t look favorably on his suit. The Reverend and his wife aren’t being maliciously cruel in turning Ben away, just concerned that their daughter be able to live in the lifestyle to which she’s accustomed. I would have found it strange of Susanna herself hadn’t shown a bit of reluctance as well. Even after Lt. Wolfe and his men ransack the Smith household, she still lives a lot better materially than she initially would married to Ben.

Then there’s the plotline of Ben’s verging-on-treasonous anti-British activities and Susanna’s efforts to help the runaway indentured servant. Both of these put them at odds with the Crown authorities. Ben’s a lawyer charged with upholding the law but he can’t stand by and watch the Colonists treated as sulking children while Susanna has been raised by her parents to acknowledge those in authority over her – her parents, the Crown and God – and not to question what she’s told by them to do. Treason sticks in her craw and it takes the heartbreaking case of abused runaway Dotty to start her along the path of rebellion.

The book loving quotes which Susanna and Ben exchange warm my heart as does his book lending to her and his pleasure in her wit and intelligence. Her thwarted desire for a better education reminds me to be thankful that times and opinions on women’s education have evolved. The methods by which justice are carried out also makes me happy that we’ve come a long way from branding, pond dunking for unmarried pregnant women and ear cropping.

In their quest to help Dotty, Ben and Susanna have to face some hard truths about themselves. How far does one go to protect the innocent even if it means breaking the law? When does injustice require sacrifices that might include your own freedom? How free are they truly when they have so little recourse against British authority? And if Susanna is willing to defy the law to protect Dotty, how can she tamely submit to marrying a man of whom her parents approve but who leaves her cold? The way Ben and Susanna answer all these questions tells me much about their integrity, strength of character and the love that will hopefully fill their lives together.

The book is an inspirational but I didn’t think I was being converted or hit over the head with religion. These are religious people in more openly religious times who call on their God for strength and help in times of trouble rather than people who question their own faith or that of others.

The final resolution of all the subplots came down to the wire and I did wonder how on earth you’d bring it off without a grave injustice to anyone. People, both good and evil, do suffer the consequences of their actions but in the end, truth prevails and it’s managed in a way that is believable. B