I picked this up even though I had to buy it direct from the Ellora’s Cave site and even though I have never read you before (although my records indicate I purchased a book by you that was published in 2002, Price of Pleasure).  The motorcycle club angle intrigued me as did the comparison by the reader recommending it to Kristen Ashley’s Motorcycle Man which I consider to be the KA gateway drug.  I’ve never watched one episode of Sons of Anarchy and know next to nothing about Motorcycle Clubs but from what little I’ve read they appear to be breeding grounds for unhealthy misogyny and crime. 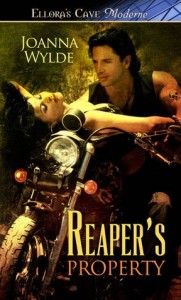 Reaper’s Property brings both those elements to life within the confines of a romance story.  Will this raise a reader’s hackles? It did mine but the authenticity of the world in Reaper’s Property and the interesting power struggle made the story more compelling than most. I’d recommend this book to readers so long as they know what they are getting into.  The story is told primarily in first person from Marie’s point of view, although there are several scenes told from Horse’s point of view, in the third person.

Marie took one hit from her husband’s fist but no more.  She left him and moved in with her brother, Jeff, into the trailer where they grew up.  Their mother is in jail for assaulting a police officer. Marie is without a job.  Unbeknownst to her, Jeff has begun to do some work for a motorcycle club called The Reapers out of Coeur d’Alene, Idaho.  The Reaper is a huge, well, gang even though the word is never used in the book. Their power structure spans several states and their reach includes Eastern Washington, Yakima Valley where Marie lives.

The motorcycle club comes to visit and one of the members, Horse, is attracted to Marie. Horse visits her over the space of a month or so, infrequently given that she lives about three hours from his home base in the Idaho. She is intrigued by him but is insulted by his constant use of the term “sweet butt” which she knows is no endearment.  She bristles at the idea of being someone’s property and frankly, Horse has a violent edge to him that is scarier than her soon to be ex husband has ever emanated.

Jeff gets in serious trouble with the MC and the MC offer her the opportunity to either be Horse’s “house mouse” or Jeff will be killed. Marie agrees to go with Horse. There are a lot of other shenanigans that happen but essentially it is a) does Marie come to accept living within the confines of the MC rules? (yes) and b) does she begin to trust that her relationship with Horse can have some equality? (yes, but).

In many ways, this is a story of dominance and submission.  Horse wants Marie to submit, but not just to him but to his world.  He tries many times to explain to Marie that being his property isn’t the same thing as she perceives it to be.  His paradigm is different from hers.  To be his property, he declares, is to be cared for him and by the club. “Seriously, a biker’s old lady is like his wife. She’s his woman, his property, and if anyone fucks with her the entire club will come down on them. Hard.”

Marie resists and her resistance pulls at Horse all the more.  Horse uses the word “tribe” frequently to describe the club.  Within the tribe, different words have different meanings, or at least that’s the refrain that Horse tries to sell Marie.  Marie plays role of the reader. She’s unfamiliar with the MC.  She doesn’t like the idea of being property.  She struggles with the offer she is being made and doesn’t understand the significance.

How much one enjoys this book depends on how willing they are to accept Marie’s consent. Marie is no doormat and indeed, the entire book rests upon Marie standing up for herself, frequently.  Horse’s overbearing dominance would look even more menacing contrasted against a weaker female character.  Marie’s refusals and independence invoke outbursts of temper by Horse and there were times I felt Marie was in jeopardy.  But Marie’s willingness to resist Horse is part of what makes her so attractive to him.  And importantly, at every juncture of Horse’s dominance, there is obvious willing consent on Marie’s part. In other words, his dominance turns her on and when she tells him to stop, he stops.  Always. Most importantly, Marie can leave Horse.

Horse has only two real rules – don’t denigrate him or the club.  He encourages Marie to get a job and an education.  He provides the funds and ability for her to do so.  These sorts of actions mitigate against the idea that Marie’s only life would be as Horse’s appendage.  Through the daughters and wives and old ladies, Marie understands how to gain agency within the club.

However, much of the agency Marie derives is premised on Horse’s emotional servitude to Marie and that is true for most of the women who aren’t “sweet butts.”

“…. We’re gonna practice every day until you’re comfortable with it, can do it without thinking. This gun is part of you now. You got me?”

“Oh baby, you have no idea,” he replied ruefully, brushing back my hair and tucking it behind my ear. “No idea at all. Now let me watch you shoot. Chicks with guns are hot.”

This story came off tightly written and well researched. The motorcycle club rang authentic and even though I recoiled at some of the story, at the same time, I appreciated the grittiness of it. If you are going to have a motorcycle club story, why whitewash it?  Make it work for me in all the non PC glory.  I wouldn’t ever want to live in a MC or have a partner like Horse but visiting was a wild and compelling time.  B