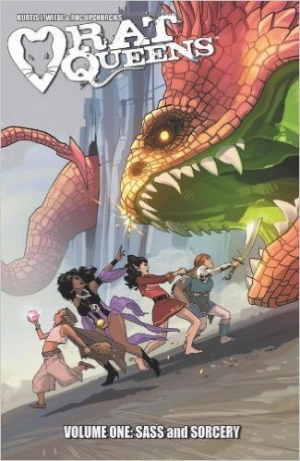 Who are the Rat Queens? A pack of booze-guzzling, death-dealing battle maidens-for-hire, and they’re in the business of killing all god’s creatures for profit. It’s also a darkly comedic sass-and-sorcery series starring Hannah the Rockabilly Elven Mage, Violet the Hipster Dwarven Fighter, Dee the Atheist Human Cleric and Betty the Hippy Smidgen Thief. This modern spin on an old school genre is a violent monster-killing epic that is like Buffy meets Tank Girl in a Lord of the Rings world on crack! Collecting the first five issues of the sold-out hit series at the special introductory price of $9.99!

I was introduced to “Rat Queens” as part of my Hugo reading packet, but let’s just say that I could not enjoy it fully as a PDF file and ended up going to the bookstore and buying a good old-fashioned paperback. Reading a paperback was a much more enjoyable reading experience for me.

I do not read comics very often, so my knowledge of this genre is not very good, but sometimes I am interested and “Rat Queens” could not have come at a more appropriate time, because I really loved it.

There were review quotes on the back cover of the book and I just want to quote from one, because I completely agree with it.

“It’s the portrayal of realistic-looking female characters. Different body types that women see when they look in the mirror, not in Photoshopped ads from shopping magazines. It’s clothes that look like they’re made from actual cloth rather than form-fitting bodysuits.”

I invite you to check out the picture on the cover of the book – I believe you can see it on Amazon and whatever other retailer you may be considering purchasing the book from. I could not find it available for Kindle, so I am not sure if you can check out any other pages, but I think you can at least get an idea of how these women look. The introductory pages of the paperback have gorgeous individual portraits of all four of them, and if you are in the bookstore, take a look. They are warriors, so of course they all look fit, but they truly do look different from how women are portrayed in a lot of comics. Yes, I know that I said that I do not read comics that often, but honestly even from what I remember this one is different in a good way.

Let’s talk about the story for a little bit. The city of Palisade’s council and mayor have decided that its peace, quiet and commerce have been threatened – too many young people are drinking in bars and getting into fights. Actually, apparently some other “core problem” needs to be eliminated first, so several merry bands of mercenaries who keep the city safe from external threats are given several assignments (Quests) to complete. The Rat Queens ‘assignment’ is to “clear the gobbling out of Hindman cave,” while other Mercs are supposed to “slay one armed Ogre”, “sack the Bandit Camp out off shore road,” and do other delightful stuff.

Very quickly the Queens realize that their Quest was a trap which was intended to get them killed. On their way they realize that other missions were also highly problematic and left people dead for no reason. Pretty much the rest of the story is them figuring out who wants them dead and why and trying to deal with that threat. This is the gist of the story in the first volume, but we learn a lot about the Queens and get some tantalizing hints about their past, which I hope will be more developed in the next volumes of the story. The dialogue is often very funny. This is a little snippet between Hannah (elven mage) and Violet (dwarf fighter) in the middle of the battle:

“How in all hells did this thing sneak up on us?
You’re the one with elven eyes! Elven! Eyes!
Don’t pull that sheet on me! My mother is near sighted and I’m just a product of familial traits! I suppose you just love dwarven ale… because you’re a dwarf!”
You know I only drink wine! And do you seriously think my people only brew one kind of beer and then, with the creative imagination of a donkey’s cock, name it dwarven?!
Well, I only know one dwarf who drinks wine as a matter of principle, and it’s really goddamned obnoxious, you know that?”

This is a story about mercenaries, so it goes without saying that it has violence and gore; it is an action/adventure comic after all. Queens fight, sometimes to the death, and it is drawn in detail, but somehow all the violence never disturbed me. I do not know why, but violence in comics, graphic novels, and yaoi is easier for me to stomach than in text-only books. One would think the contrary would be true since visual representation is more in my face, but that’s how it works for me. I’m not sure whether other readers will have the same reaction. And this specific story still had an overall light touch for me, so I am sure that played a role too.

I was impressed by how well the authors managed to give all four main characters enough depth to make me want to learn more about them. There is no romance yet, but there are indications of potential romantic storylines for two of the women already (I tagged the book as f/f, but this was really half a page, maybe three quarters of a page overall. One of them is trying to engage her past romantic interest on one page and at the end it looks like there is a chance that their romance may restart). There is also an indication that Captain of the Guard is very interested in another Queen and that she may return that interest. Having said this, this volume is fantasy, first and foremost. If romance is to play a more prominent role, it will happen later and of course I cannot be sure whether it will happen or not.