It’s no secret that I am a fan of your writing so perhaps its impractical for the Dear Author readership that I am the one writing this review but when I received the ARC, I admit to hoarding it. Sorry other DA reviewers, but the good news is that I am willing to let it out of my hands as my ebook copy is preordered and will be downloading sometime tonight. 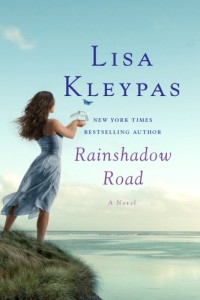 Rainshadow Road is written in the same spirit of a Sarah Addison Allen book, a contemporary world with a touch of mysticism or what some term magical realism. The mysticism aspect of the story was the weakest part. Why magic in a mundane world?  Is it that true love can only be obtained through magical intervention?  Or is it meant to highlight the beauty of love, that there is something magical in the concept. Or was it just something to test writerly boundaries? I’m not sure if the message of “Rainshadow Road” is that every gifted artist has magic or whether every person has a gift of magic.  The inclusion of magical realism is also soft. The story would have remained the same if you removed the mysticism. The characterizations, the plot, the conflict all exist without those elements. The good thing is if readers don’t like the magical realism element, it doesn’t interfere a great deal and will be only a minor irritant.

Lucy Marinn is a gifted stained glass artist who is reeling from her fiancé running off with her sister, Alice. When Alice was five she contracted meningitis and after Alice’s recovery, the family response was to coddle her well into adulthood. Alice grew up taking what she wanted and she wanted Lucy’s fiancé. The truth is that Alice has always wanted things that Lucy enjoyed and Lucy’s fiancé is just the last in a long line of things Lucy has had sacrificed on the Altar of Pleasing Alice. Kevin, the weak willed fiancé carries out the role of infidelitous bastard almost cartoonishly by telling Lucy that not only is he going to “take a break” and that he’s fallen in love with her sister and that he’s been sleeping her sister, but “But the thing is, Luce…Alice’s going to be moving in pretty soon. So you’ll need to find a place.” (Pg. 21)

Kevin, however, is the only character drawn with this heavy hand. Even Alice is more nuanced and her parents give her some tough love. The majority of the story centers around Lucy and the owner of a vineyard on False Bay at the end of Rainshadow Road. Sam Nolan is a good time guy. He treats women with respect and enjoys their company, but he doesn’t do relationships. The two meet on the shoreline of False Bay and Lucy runs away from Sam, thinking that she’s a single woman alone and he is a big strapping man. There is nothing to fear from Sam Nolan except for a broken heart. When Sam invites her out after some banter, Lucy turns him down.

(Pg. 32) I particularly liked this line because it explains why she ended up with #RatBastard and how #RatBastard probably seduced the willing Alice. #RatBastards hurt people because they are so charming. If they weren’t charming no one would give them a chance to be a #RatBastard. I digress.

Lucy and Sam are forced together for two reasons. First, #RatBastard approaches Sam, an old classmate, to take Lucy out on a date because Alice and Lucy’s parents are being difficult about #RatBastard and Alice’s marriage. (I should probably give Alice a nickname so we’ll call her #NarcissisticBitch which is actually a term used by Sam in describing Alice at one point). #RatBastard had done Sam a real favor when Sam had been starting out in the winery business.  Sam is  pretty appalled by #RatBastard’s request but feels compelled to go through with one date.

Sam stared at his disbelief. “So you want me to track down your bitter, man-hating ex-girlfriend, and talk her into going out with me?”

(Pg. 109) When #RatBastard texts him a picture, it is accompanied by a boast that #RatBastard has the “younger and hotter” sister. “As if to reassure himself that he, Kevin, had still gotten the best of the bargain.” (Pg. 111) Sam does not hide this from Lucy (thank god) which leads to an exchange which exemplifies the gentle humor and good dialogue:

“Apparently Kevin and Alice think the solution is to set you up with someone. They want some guy to romance you until you’re so full of endorphins, you won’t have a problem with them getting married anymore.”

“And you’re supposed to be that guy?” she asked incredulously. “Mr. Endorphins?”

(Pg. 119) Second, Lucy gets injured and is unable to care for herself. Alone on the island, knowing only Sam (albeit briefly) she finds herself hauled off to the vineyard at Rainshadow Road. This leads to an incredible hot shower scene full of sexual tension that is unconsummated showing how the build up to the act can be as powerful (maybe even more so) than the culmination.

Lucy and Sam’s emotional conflict stems primarily from Lucy’s belief she is bad at relationships and isn’t ready to get burned so soon after the last disastrous breakup with #RatBastard and Sam’s belief he is a bad bet. He’s only seen the bad side of loving as Lucy points out. Sam’s entire experience with other people works best, in his opinion, at the most shallow level. He’s not capable of anything else or so he believes. But Sam’s entire life is changing with renewed relationships with his estranged brothers, caring for his deceased sister’s young daughter, and his deepening friendship and attraction to Lucy. At the end of the story there is no doubt that Lucy and Sam belong together and the way in which their love evolved and cemented into one beautiful image leaves the reader feeling confident this is a secure happy ever after. This is not a cheap book. It’s a trade paperback which likely means the digital price for the book will be $9.99. But it’s a book with passages I’ll want to revisit and for that reason it was worth the buy price for me. B