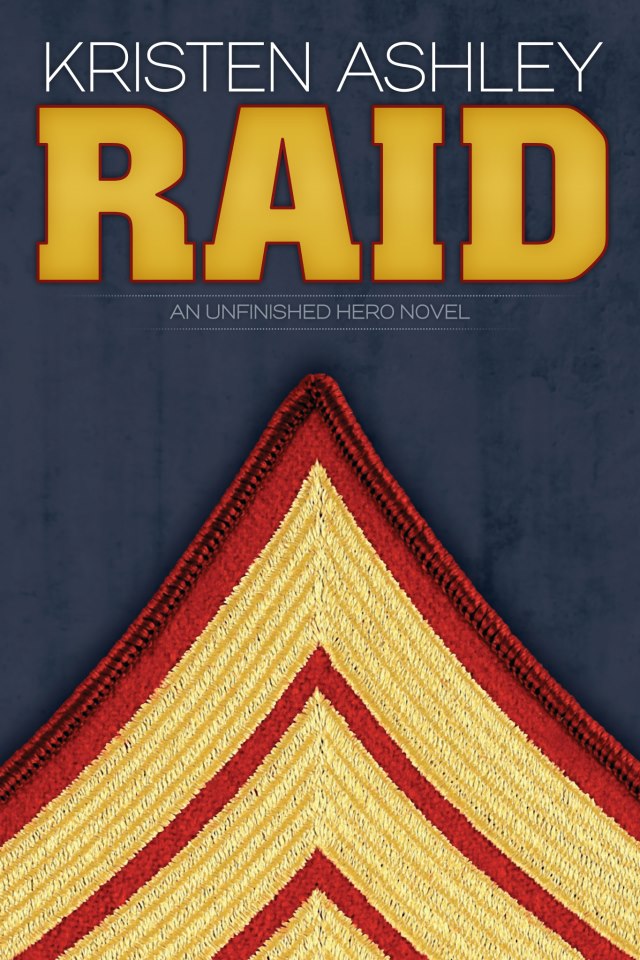 That I requested Raid for review comes to a surprise to no one. The fact that I gobbled it up in less than three hours probably also comes as no surprise either. Of all of your series, the Unfinished Hero series is the one that I’m most likely to have issues with. I was appalled reading Knight, enjoyed Creed for the most part, and wasn’t sure what to expect with Raid, except that I knew after reading the three sample chapters online that I wanted more immediately. What I found was a hero who was a combination of Tack from Motorcycle Man and Knight — part domineering douchebag, part seriously in love hero.

Hanna Boudreaux has lived in the small town of Willow, Colorado all her life. The great-granddaughter of the town matriarch, she’s sweet, cute and quiet.

Hanna has a moment of epiphany when she realizes her crush for forever, Raiden Ulysses Miller, is not ever going to be hers. She sees her life as narrow and decides to do something about it.

Raiden Miller is the town of Willow’s local hero. An ex-marine with the medal to prove his hero status, he comes home, shrouded in mystery. It takes a while but, eventually, Hanna catches his eye.

But after all these years of Raid and Hanna living in the same town, the question is, why? Is Raid interested in Hanna because she’s sweet and cute? Or does Raid have something else going on?

Hanna has been in love with Raiden Miller since she was six and was on his team at her grandmother’s annual summer picnic. Raiden, being older and a boy never even noticed Hanna. Then, when he got older, he joined the Marines and went away. Hanna dated other men, but never forgot how she felt about Raiden. When he got out of the Marines, Raid returns to Willow, Colorado, intent on trying to find a little peace after the horrors of the battlefield. At first, he doesn’t notice Hanna, even though she goes to his sister’s coffee house at least three days a week in the hopes of a glimpse of him. One day, Hanna sees Raiden making out with a busty brunette wearing too much make-up. It’s then that Hanna realizes Raid is never going to go for her. So she decides to do things for herself. She gets a make over, books a cruise and buys a sporty car.

Unsurprisingly, Raid notices Hanna shortly afterwards. He’s enticed by her cuteness. She’s dorky and goofy and truly beautiful. He immediately begins a pursuit of her, going through her grandmother, the grande dame of Willow. Raid wins her grandmother’s approval almost immediately, though she warns Hanna that Raid has a lot of darkness in him and that she should be very careful. Hanna is delighted and astonished that Raiden in interested in her. She’s also confounded as to why. Even though Raiden tells her over and over that she’s beautiful and sweet and makes him feel renewed, she still doesn’t really understand his attraction.  But the more involved she gets with Raiden, the more she realizes that he has issues that darken his soul and need her sweetness to lighten.

Raid was one of only four soldiers from his platoon that returned from war. He’s haunted by night terrors, making him dangerous to sleep near. He’s moody and sometimes deeply cranky. He’s dominant in all aspects of his life, including sex (sort of). His job, now that he’s out of the services is not exactly legal – he’s a bounty hunter, one who doesn’t turn his skips over to the police, instead giving them to the men who are seeking them. Hanna has been sheltered her entire life, so she struggles with the fact that Raiden’s work is not above-board. She has a hard time with how he sometimes speaks to her. And while she enjoys sex, there are times he asks her to do things she’s uncomfortable with.

Suddenly, he asked, “Trust me?”

“Then on all fours, baby, crawl to me and do it slowly.” Oh God.

“Do you trust me?” he semi-repeated.

I swallowed before I nodded.

I closed my eyes telling myself this was Raiden. He wouldn’t humiliate me. He wouldn’t debase me. I could trust that he would lead this to something good.

I opened my eyes again, kept them on him and slowly dropped to my knees. Keeping my head back, I fell forward to my hands.

This particular scene bothered me. Crawling across a floor IS debasement to me. I understand that many will disagree with me. But shortly after, they have a discussion where he tells her he knew she didn’t want to do it, but did it anyway. That makes me ask, why would he have her do it if he knew she didn’t like it?

Raiden does have very serious issues, the most apparent being that he suffers from PTSD. He has night terrors that can lead him to physically hurting Hanna. He throws her out of bed at one point. Of course, he’s completely horrified. Hanna’s answer is that he should speak to the other survivors of his unit to see if they are having issues. MY answer would have been to get him to seek professional help. Raiden’s PTSD was mostly glossed over, a couple of scenes, he talks to a buddy from his unit, and not much else is said about it. This felt to me like a squandered opportunity. I’d have liked to have seen the PTSD be the central conflict for the two of them. Instead, it was lightly touched on and then never really mentioned again.

Overall, I felt like Raid was much more tightly written, with very few glaring typos. Your writing voice is as strong as ever, and Raiden is a signature Kristen Ashley hero. The book also felt shorter to me. I think this is because I’m spoiled by your 130,000 word epics, so I was disappointed to see this book end. Also, Raiden gives Hanna the same “I like to be in charge in bed” speech as Knight gave Anya, but it was rarely anything more than making her hold out for a short period of time. No actual D/s behavior, except the crawling incident.  It makes me wonder why his Dominance was included in the book? Particularly given his history, a more apparent D/s relationship would have been quite interesting to me.

But as usual, I thoroughly enjoyed my visit to one of your worlds, and despite some misgivings about the hero and a wish that you’d focused more on the PTSD, I was impressed by the book and found it to be quite entertaining. My usual Kristen Ashley disclaimers apply: not everyone will love your writing voice, and definitely Raiden will push reader buttons. But for me, I ended up as satisfied as ever by Raid. My grade is a B.

→ Kati
Previous article: 11 Fantastic Marriage Proposals Uploaded to the Internet
Next Post: REVIEW: A Shot of Sultry by Macy Beckett