I would have never read this book if Angela James hadn’t recommended it to me.   It is published by ACE and while I love some ACE authors like Patricia Briggs and Ilona Andrews, I associate the line with more straight up urban fantasy, fantasy and science fiction than any kind of romance.   However, Angie told me two things about this book that made me start reading: 1) this is a romance and 2) even though it appears to be the start of a series, the entirety of the romance is contained in this one book.   I was all in. 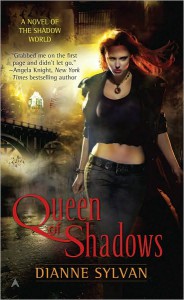 Miranda Grey is a musician and one day she figured out that she could project a particular emotion and affect those around her. She was playing a sad song on her guitar at a local cafe and suddenly everyone around her was weeping.   The next day she went to another coffee shop and played a happy song but thought sad thoughts and everyone weeped again.   Heady with her sudden ability to control the emotions of those around her, Miranda began influencing larger and larger crowds with her music obtaining a regular gig and inciting interest with record people.

As she used her gift more frequently, she began to open herself up and while she could impose her will on people, she was also vulnerable to their emotions.   She became a receptacle of thought and feeling for those who surrounded her until she could barely function in public.   Her dingy apartment became a haven of silence for her, an escape from the pressing unconscious demands of those around her.

One night, stumbling home from a gig, Miranda stops at a convenience store and someone sweeps up behind her without her sensing him. This startles her and she turns to look at him and finds him to be deafeningly silent. The he is David Solomon, Prime of the southern territories and a vampire.   He’s intrigued by Miranda because he senses in her a great gift.   After another gig, he follows her home but is called away to attend to an emergency and Miranda is gang raped.   Toward of the end of the gang rape, she begins to get angry and pushes her emotions out and kills the men with her mind. She’s badly injured though and when David Solomon returns he finds her lying there.

I found the insertion of the rape scene to be almost gratuitous and here is why. In nearly every UF novel I have read other than the Ilona Andrews’ Kate Daniel’s series, the female protagonist has suffered a rape.   It is as if surviving a rape is a condition predicate to being a UF heroine.   The only thing that I could see the rape scene serving in this story was a catalyst for Miranda to realize she could use her power offensively.   It did not provide any impediment to a relationship for her and David.   And it wasn’t as if Miranda wasn’t nearing total broken status without the rape.   She was already well on her way to being place in a mental hospital like her mother had before her.   That said, the gang rape see, while graphic and violent was short and the story does not dwell on it.   (In otherwords, I paying for more attention to this issue in the review than the story does).

David Solomon is Prime, one of the 27 rulers of the shadow world comprised of vampires. He wears a Signet, a jewel that signifies his position as Prime. The Signet was created by some power stronger than the vampires and it accepts only certain people as Prime. If the Signet doesn’t light up for you, you can’t be Prime. Most Primes have a Queen, a partner that is picked for them by the Signet. (Cue fated mate music). David has been prime for 15 years and has no Queen. Some Primes never find their Queen and the burden of being Prime with no balance can lead to a precarious situation so everyone around him hopes he finds a Queen, or a least a lover.   One of the more delightful characters in the story is Faith, who is David’s number two in command, but number three on the power chain.   Number two is open, she tells Miranda, awaiting the Queen.

David takes broken Miranda to Haven, the Austin vampire home, and begins to nurse her back to health. He also tells her about the vampires, her gift, and helps her to learn to shield. Over time, they begin to fall in love with each other but she’s not a vampire and his rule over the Southern territories is being challenged by a rogue group who are killing humans, his own people, and tying Miranda to him would place her in danger.

When she is sufficiently healed, David returns Miranda to the city hoping that this will keep her safe.   Implicit in David’s promise when he leaves her is that he will come when it is safe for them to be together.   In true romance fashion, they long for each other from a distance.

David is a bit of a MarySue. He’s brilliant, powerful, makes all sorts of cool techie gadgets for the underworld.   Part of David’s success is his ability to communicate with his vampires and to track their movements. I found it a little incredible that he had time to invent all these gadgets as well as serve as a lieutenant and then a rule in his own right.

I liked Miranda quite a bit.   I never felt that she was a victim, even when she was.   She was strong without being stupid on her power.   The two of them were a good match.   There is a strong world building element even though I didn’t comment much on it in the review. It was good, believable. I thought the suspense was believable. I liked the way David’s anxiety as leader was portrayed. He felt the weight of the Signet often and wished, from time to time, to return to the days of just being a lieutenant, carrying out the orders instead of making them. I loved Miranda’s affinity for music which I originally thought was going to be twee. Love it when my expectations are turned on their head.   While this might be marketed as a UF, it’s a straight up romance.   Fated mates and all.   B

PS Apparently Sylvan is a fan fiction writer or was and that some of this story may have appeared in the annals of Vampire Diary fan fiction but I haven’t read any VD work and wouldn’t know fan fiction from original fiction and thus this appeared to be all new to me.