REVIEW: Prove It by Chris Owen

I’ve always liked your writing. I loved your 911 (m/m to m/m/m), until you got too freaking weird on the sequels (a centaur?! Really?!). And I REALLY loved Gemini, which is, yes, a twincest, m/m/m threesome book (twins plus their boyfriend) — my utterly guilty pleasure and the reason I will never denigrate twincest books (at least m/m twincest–no possibility of pregnancy), no matter how icky it actually is. I love your characters — they feel so real, so like real people, and I love them so much. So when Prove It crossed my radar, I looked at it and liked the blurb enough that I requested it. And oh, I’m so glad I did. 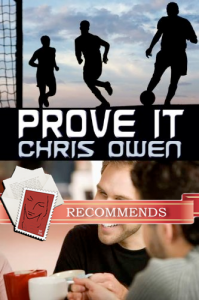 Some background here is necessary because I think it colored my reading of this book quite a bit. I started going out with the man who is now my husband when I was 16, he was 17. We’d known each other for 2 years at that point, ever since I came to the US. We have now been together for almost 21 years now. We’re way more in love now that we were then and I only expect it to get better. As teenagers, we somehow worked out communication techniques and habits that have held is in good stead for two decades. We’ve certainly refined things over the years, but as a whole, things happened as teenagers that a lot of people would think are impossible because we were almost way too mature for our age. So when things like that happened in this book, it worked for me in ways that it might not for other people, depending on their background. Keeping that in mind…

Warren and Silas have known each other since they were five. They had an off-again/on-again friendship till middle school, when Tal came to town and brought them together for good as friends. The three of them are best friends with each other from then on. The story starts in omniscient POV and holds with that for a few chapters, which was actually kinda fun, before it slips into deep third person, alternating  between the three characters.

The tension comes from the fact that Tal figures girls out in middle school, Silas figures boys out in high school, but Warren…doesn’t tell anyone what he figures out. It’s obvious to the reader that he’s gay and his friends sort of know, but he doesn’t tell anyone. So we see Tal and Silas work through their teenage relationships and Warren…not. We see them all go to college and Warren finally losing his virginity, but still not talking about it with anyone, least of all with Tal or Silas. His friends finally stage an intervention in college when Warren turns 21, when Warren finally tells them he’s gay. This instigates Silas actually thinking about Warren as a potential partner, but Warren refuses to be one of Silas’s long string of boys and tells him to, as the title says, “Prove It.”

Warren finished his coffee. “Okay, so what’s up? Is this another intervention? I swear I’m not secretly straight.”

“No.” Silas sighed. “Or at least, not for you. Tal thinks that you deserve to know that, while I fully appreciate that the way you want to live your life doesn’t allow for romantic entanglements other than the occasional fuck buddy, and that you won’t be dating anyone for at least two or three or nine years, this summer aside, and while all of that makes sense and I don’t want to change it for you, or stop you from going out west to be a famous multiple-degree-getting dynamo–”

“Silas.” Tal sounded stern. “You’re going to choke on your own tangled sentences. Tell him so you two can discuss it and get on with your lives, for God’s sake.”

Warren stared at them both, not precisely sure what was going on. “Can I say something first?”

“Is this about how I love you and you love me and how we’ll try to make it work when I’m not living with a textbook?”
Silas gave him a look that was pure belligerence, and Tal managed to look surprised. Warren sighed. “Look. Here’s the thing, Silas. I know you love me, and I know you love me in a way that’s not like you love Tal. I know you can easily see us together forever. And that scares the crap out of me, honestly, because I know you. I’ve known you since you were five years old. I know every trick, every game, every honest expression you have, and I know how you love.”
Warren stood up, his heart racing and his stomach churning. If he’d known that they were going to have this talk on this morning, he wouldn’t have had coffee. It had been building for a year, but here it was, and he had to say his own truth. He’d sworn to himself that he would.

“You love with everything you have. You throw yourself at it like you’re a weapon and you consume it. And then… it doesn’t stand up. You move on, processing lessons and getting on with your life, and you even manage to avoid breaking hearts, most times. But I’m me, and I’m not one of those guys, and I refuse to be. You love me, but I’m in love with you, and I have been for a while. If you want to get with me, if you really, really want to be mine and for me to be yours, you’re going to have to prove it.”

I loved the characters in this. It was a gentle, interesting look at three guys growing up. There were no explosions, very little angst, no mystery, nothing to solve except three guys and their romantic entanglements. I loved the woman Tal ended up with, I loved Silas’s cluelessness about his feelings for Warren, and how he proved to Warren that he was serious about them. I loved the gentle focus on real people. It was  a great contemporary romance, nothing brilliant, nothing outstanding, but just a great way to spend some hours sinking into the happiness of three likable boys-to-men.