“Darcy Bennet lives to be on the ice. When the other little girls were watching the Olympics and dreaming of figure-skating, she was dreaming of representing her country not with skates but with a broom.

At seventeen, Darcy still has Olympic dreams, but she has more immediate concerns. Like getting her team to Regionals, making sure she’s accepted by the local college, and convincing her best-friend and team skip not to go to a university on the other side of the continent. Oh! And, possibly most important of all, resisting the urge to kill Lucas Fitzwilliam. ‘Cause he may be really annoying, but Darcy’s pretty sure they don’t have curling in prison.”

Frankly I’m still surprised at myself that I decided to read this book. Why, you ask?, since I’ve obviously finished it. Because for the most part, I’m so tired of Jane Austen retreads, Jane Austen ripoffs and authors trying to make a buck off of Jane Austen’s books. So let me be perfectly blunt and say that when this book popped up with a few others after I typed “romance” and “sports” into the search box at Smashwords, I was just sure – sure, I tell you! – that I’d read the blurb, roll my eyes and crisply say, “Not! Next.” But I didn’t. I read the whole thing and thought, “this could be cute. Darcy sounds like a girl with dedication to her sport and a sense of humor. I might just like this girl.” And with the sale that Smashwords was running – I regret that I couldn’t get this finished in time and reviewed so people could take advantage of it – I couldn’t pass it up.

And I am so glad I didn’t pass it up because once in a while a book comes along that I want to pick up and hug. “Pride, Prejudice, and Curling Rocks” is such a book. 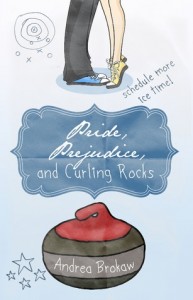 What I know about curling is basically limited to the every four year snippets during the Olympics and the movie,”Men with Brooms.” So yeah, not too much but I enjoyed how you used it as the focus of Darcy’s life up til now and the reason she’s involved with Jean – her best friend and team skip(per), Lisa – Jean’s (sometimes annoying) younger sister, and Maria – the brain who worries about her SAT scores and romance with Cat. I wonder how Jane Austen would feel about lesbian characters in a modern interpretation of her book. I thought it was genius. The other main characters in the original are cunningly transformed and swapped around a little into – Lucas who’s not too sure if he thinks his friend Adam is worthy of dating Jean, Colin the senior drip who won’t take Darcy’s answer of no when he asks her to the Winter Waltz dance, Mrs. Fizwilliam who is the crazy, dippy mother (though I wish the rational for her actions had been explained more), Hunter who might be interested in Darcy or might not depending on how Lucas feels about it, Amelia who is Lucas’s darling niece and part of the reason for Hunter’s misinformation to Darcy about Lucas, Carol who is Adam’s sister and quite willing to do what it takes to get Lucas, plus Shel and Darcy’s mother who are wonderful parents and Kev, Darcy’s slightly younger brother who can be annoying yet willing to take on any guy who tries to break his sister’s heart. It was fun to play “place that character” but also see how you’d mixed them up just enough to make it interesting.

Other updated versions of JA’s books have used the hormonal years of teenaged high school as the backdrop but here it takes me back to my own last year before college better than, say the movie “Clueless.” Not that I don’t like that film but it’s hardly an accurate picture of most kids in America. Ah, the agonies of the “does he like me? Go ask him to the dance so his best friend will ask me.” The rumor mill that is school. “Yes Colin asked me but no, I never told him I’d go with him.” Who is sitting next to whom in class and at the “after curling practice” trip for pizza. Who’s watching you and who are you watching? Can you trust what she says? Lisa might think wearing so much makeup makes her look older than 15 but unless you’re a drunken frat boy, it’s easy to tell she’s not. Honestly, I wouldn’t go back to being 17 again but I relived it a little reading this book.

The curling is a fun focus for the story in place of balls and assemblies and Darcy’s obsession with it is something straight out of most teenager’s memories. Is there anyone who didn’t have something that was so important, so vital to teenaged life as they knew it? Something that could bring you together with best friends and then tear you apart as you or they started to move on? Jean’s admission that she needs to take a chance and try new things in her life is a wake up call to Darcy that life isn’t going to keep going on as she thought. It’s also a way for Darcy to discover that best friends can survive this and that a cute guy might be able to understand what she’s going through.

As for the cute guy, here he wears glasses and plays hockey. His reserve is that shyness that strikes guys when they’re around a girl they like but his decency is so obvious – well obvious to a reader but maybe not to a 17 year old confused by who is truly interested in her and annoyed with a 15 year old trying to act older. The two steps forward and one step back – and slightly sideways – is Young Love just as we all remember. It’s sweet, thrilling and can crush your heart within minutes. Just as in the original, the reader will have to wait until the very end for Lucas and Darcy to realize they’re on the same page at the same time but the moment of realization is very worth the wait. Though I am grateful that the book ends on a HFN – they’re only 17 and 18, after all.

I ended up being impressed by your characterization, the humor and how you’d managed to update the story so it’s believable and yet still retained so much of the spirit of the original. Yes, I’m glad I tried this one. Yes, I actually learned a bit more about the fine sport of curling. No, I’m not going to start diving into every JA themed book that I come across but reading about a curling JA inspired YA heroine made me very happy indeed. B

→ Jayne
Previous article: REVIEW: Within Reach by Sarah Mayberry
Next Post: Monday News: Parodies, Women ruining the prestige of YA, The Starbucks analogy, and KDP Success